Oct 21, 2014
From the editor's desk :-
Dear Do..Re..Me..Fa..browser,
My heart is bubbling with joy as your favourite music column melodiously enters its 13th glorious year.  I'm greatly indebted to you for your generous support and encouragement without which I would not have been here today.
Last month we fondly celebrated 'Monti Fest' our heavenly mother's birthday.  This month of October is dedicated to our Lady.  Invoking blessings from our heavenly mother on all, I present to you this first Chord in this 13th year, a special Chord of Do..Re..Me..Fa.., of a great devotee of our Blessed Virgin Mother, a very well known Bappi Lahari of Konkani Music who is none other than my fellow Bendurgaar Lancy Moras Bajjodi.
As we all know the renowned Bendur Parish in the Diocese of Mangalore is also known as the cradle of Konkani talents that gave birth to the great Konkani Music legends like (late) Alban Castelino, (late) V.J.P Saldanha, (late) Vally Vas, Claud D’Souza and the long list goes on....  There is one more addition to this elite list of musicians from this parish and that is  none other than Lancy Bajjodi  known  to everyone as  Lancy Moras!
After performing his first stage performance at the Don Bosco Hall in 1989, owing to his search for the greener pastures he left for Middle East and took an exile from Konkani Music or 22 longs years.  However,  who can  keep the talent hidden  for long and that too,  a born musician like Lancy?  Lo..  within a short span after his return to Konkani Music 2011.. he has showed his prowess over Konkani Music and  so far has seven successful Konkani Music Nites to his credit.
My special thanks to my buddy Florine for making this sweet chord possible to play its music on your favorite “Do..Re..Me..Fa..” music column.
Now it is my privilege to present to you this sweet chord of this unique Konkani music portal and I'm sure you will enjoy listening to this melodious chord.  Once again I thank you for browsing this column.
Let's meet again next month with another musical Chord.  Until then bye!
Gerry D'Mello
Lancy Moras – the self made musician on the roll
With his beard and long tresses Konkani song writer, composer and singer Lancy Henry Moras  Bajjodi catches my attention when I met him in Mangalore recently. For me he looked more like a musical Moses   who comes down to Mangalore once a year or more to entertain Konkani music lovers with his soulful songs.   Though   I have seen him in this avatar on stage I thought his tresses were part of his stage make up. Astonished by the quizzical look on my face Lancy tells me “many people get this doubt about my hair to know whether it is real or artificial and some even try to pull it hard just to confirm their doubts”.
I met a relaxed looking Lancy at him home in Bajjodi in the presence of his family.   He comes across as a simple and unpretentious persona with no airs about himself.  He had reasons to be calm and relaxed as his 7th musical nite performed at the Don Bosco Hall just a few days ago had succeeded in   enrapturing Konkani music lovers.  The other reason for his composed look is that he could fulfil his four-year long dream of celebrating his mother’s birthday in a befitting manner and he did it in style by dedicating his 7th musical nite to his beloved mother Cecilia Moras.    The song “Tumcho Ugdas” that gave a grand beginning to the musical extravaganza said it all – love, admiration, respect, gratitude and appreciation for his mother.
Having woken up from a deep Kumbakarna-like slumber of almost 22 years from his first musical show in 1989 till 2011 that saw his comeback, now it looks there is nothing to stop this juggernaut called Lancy Moras from rolling.     A self-proclaimed fan of late Wilfy Rebimbus whom he respects as his guru, Lancy is quite modest about his talent and his contribution to Konkani music. 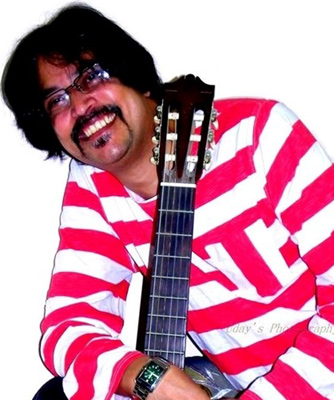 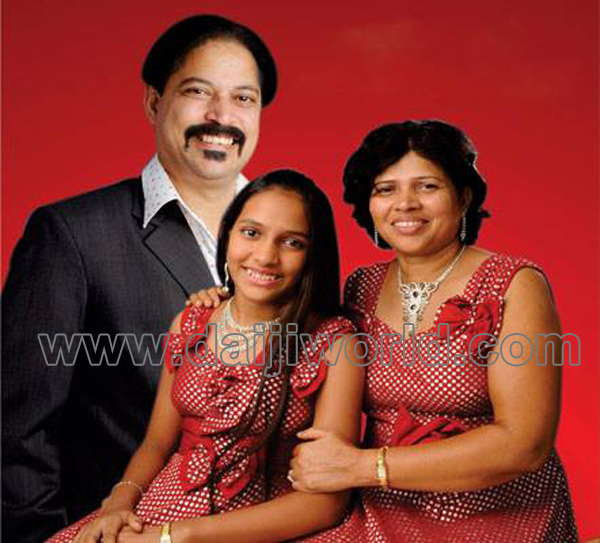 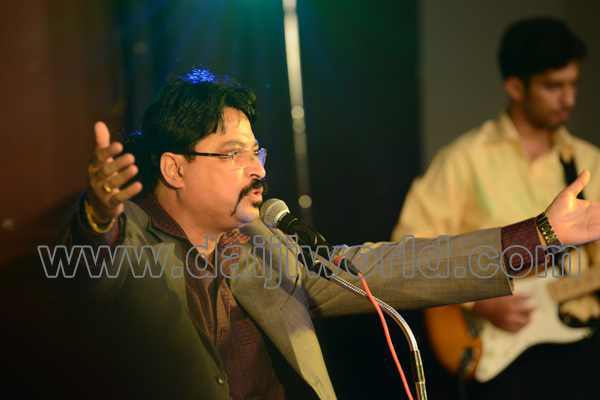 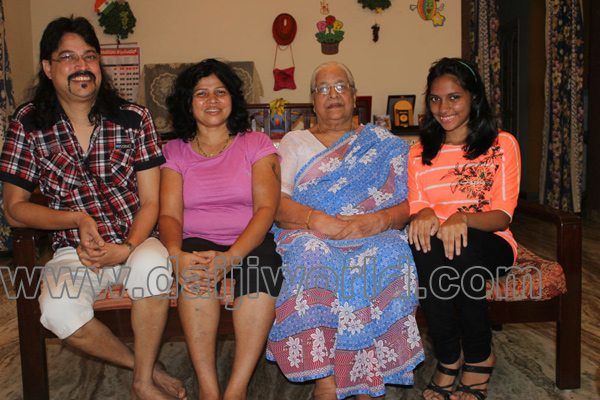 Childhood
Lancy Moras is a self-made musician who had the talent for music but did not have proper channels to harness his interest.  He was the 6th child out of the 7 children born to late Ligoury Moras and Cecilia Moras of Bendoor parish.  He completed his high school from Padua and graduated from St Aloysius College, Mangalore.  Lancy recalls that it was Fr Henry D Souza of Canara Communication Centre (now Bishop of Bellary) who spotted his musical talent.  As the financial condition on home front was not conducive   for him to seek professional training in music he decided to learn guitar by himself.  It may sound be absurd but a determined Lancy bought a basic guitar cord book and began to strum guitar chords and with the passage of time everything fell in place.    For Lancy his music talent was a gift from his mother who was in the church choir.
A grand entry
After completing his B.Com Lancy started his career working in Adlabs in Mangalore and side by side continued his tryst with music.  Having learnt music on his own, Lancy got an opportunity to emerge on the Konkani music scene in 1989 at the age of 24 when he presented his musical evening at Don Bosco Hall under   the aegis of Bajjodi Youngsters in aid of Bajjodi’s Home for the Aged.   “I was very thin and felt I was almost flying for the breeze of the fan when I was performing, the very memories of which give me goose bumps”, he recalls.
While music was his passion there is always the challenge of earning the bread and butter because to make a career out of Konkani music a few decades ago was unimaginable.  Lancy therefore had to sidetrack his passion and had to go to Saudi Arabia in search of a career.     It was good decision as far as his career is concerned but the writer, composer and singer in him took a backseat willingly or unwillingly.
Though his debut created quite an impact Lancy disappeared from the music scene for 22 years only to resurface in 2011 with his second musical nite.  In between he brought out two CD’s – one devotional titled “Tuja Shethanth” in 2009 followed by another CD of Konkani songs “Milan Mogachen” in 2011.
Musical odyssey
It is not that the environment of Saudi had put a full stop to his creative juices from flowing with all its vigour.   Once back from office guitar was his constant companion at least for an hour and only that gave him the satisfaction he was seeking.  “I used to practice at home Wilfy’s songs especially “mog tuzo kithlo ashelo” which was my all time favourite song.  I never got tired of singing it”, he declares.
In between he had to take a vital decision to send back his wife and daughter back to Mangalore to give a food foundation for her education.   Though personally it meant loneliness for him, it can also be said that this loneliness proved to be the boon for Konkani music lovers as it brought Lancy back into the Konkani music scene.  “The feeling of loneliness can be terrible and only those who experience this know what it is to be lonely” explains Lancy.  But he made use of this loneliness to pen down some memorable songs.
Grand   come back
The year 2011 can be considered as a turning point in the music career of Lancy.  By now he had set up “Moushami   Creations” named after his only daughter and under the banner a musical evening was held at St Agnes Special School ground in 2011.   One of the songs “mai maka gavncho moja ugdas yetha” which he sang at his second musical nite, touched a chord with all especially with all those lonely hearts working in the gulf.    With that successful comeback there has been no stopping the Lancy Moras juggernaut from rolling and in the last 3 years he has performed five musical nites taking his total tally to 7.
I tell him that 22 years of hibernation is too long a time and he says though he feels sad and remorseful it is never too late.  “On hindsight I do feel bad for letting that period go though my friends and well-wishers kept goading me to come out of the recluse.  Daijiworld.com editor Walter Nandalike also suggested that I should showcase my music talent.  Now I am on a roll and there is nothing that can stop me”, he declares with unwavering determination.
Credit goes to Lancy Moras for bringing internationally acclaimed musician Thushara Kuruvithage to Mangalore for the 4th Lancy Moras Nite held in Don Bosco Hall in 2013.  The fact that all his nites (except the first one which was held for charity) are held free cost bringing a musician of international fame to Mangalore was quite challenging and Lancy  Nite once again enthralled Konkani music lovers.
His 5th musical nite was held at Daman Saudi and 6th nite in Bahrain (under the auspices of Konkni Kutamb) and both these musical shows reinforced Lancy’s comeback on the Konkani music scene with a bang.   He followed it up with the 7th show held in August this year dedicated to his mother on her 80th birthday. 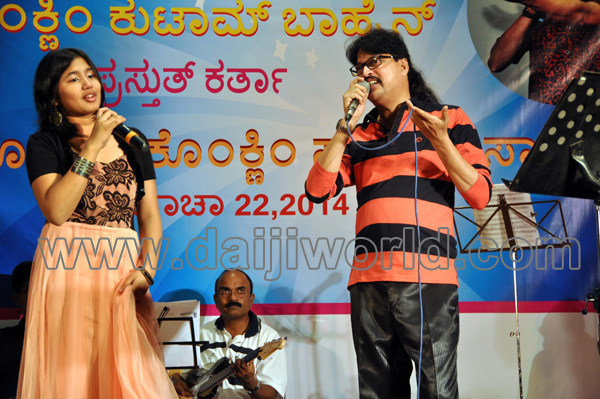 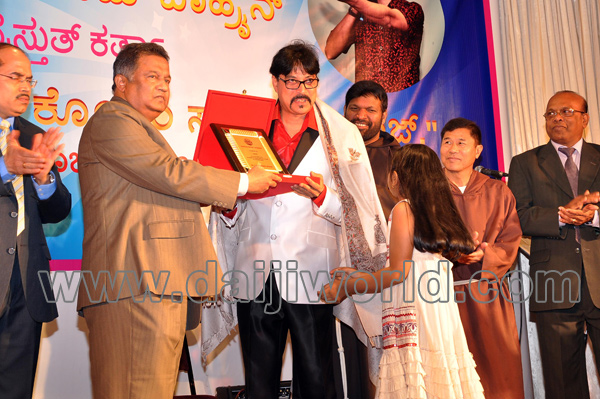 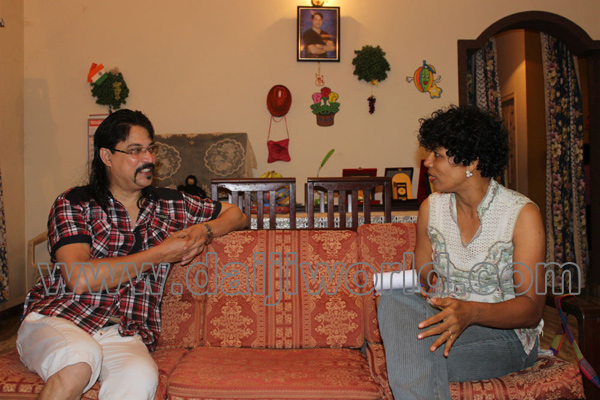 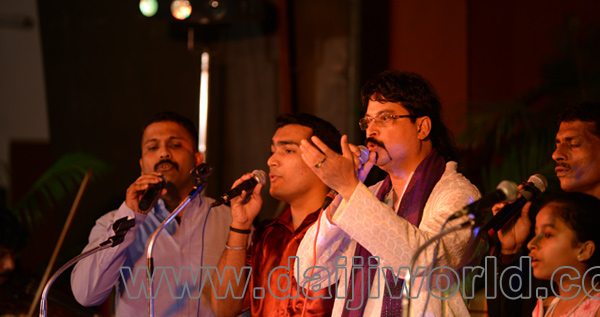 Future Plans
Lancy now is working on with his songs and compositions with a renewed vigor and it looks as though he wants to do a penance for those 22 years he lost. I think Lancy just dreads the mention of the number 22.    Now plans are also afoot for his 8th musical nite in Saudi   under the aegis of Moushmi Creations and other sponsors.
Lancy is all set to celebrate his 50th birthday next April and he wants to present another memorable musical evening to music lovers of Mangalore, the preparations of which have already begun.   He is also not ruling out musical shows in other gulf countries if an opportunity comes on his way.
Interview
Lancy Moras comes across as an amiable personality, too humble and honest.  His unflinching commitment to Konkani music is quite palpable.    Having made the best use of loneliness he now feels silence fuels his creativity to the fullest.  “If there is silence I can come out with a tune and lyrics within no time” he tells me with full confidence.
It is commendable to note that Lancy has given an opportunity to many budding talent in his nites.   “If I sing all the songs alone people will be bored.  Moreover, we have lot of budding talent and if we don’t   give platform to them they will never be able to showcase their talent”, he says.  When it comes to talent religion or caste is no bar to him.  It is to his credit that well known singers like Sangeetha Balachandra and Ravindra Prabhu have sung Konkani songs for his nites.
He is grateful to the support of his family especially his wife Hilda Moras who is a professional nurse and sacrificed her career for the sake of the family.  He is also thankful to his buddy Rony Crasta, who he says, has been instrumental in organizing his nites in Mangalore.   His daughter Moushmi has also sung in his music nites and is emerging as a promising singer.
Conclusion
A self-made musician that he is Lancy has tremendous respect and love   for his mother tongue Konkani and this is evident from his songs.  May be if he had not taken a forced sabbatical for 22 long years Lancy would have been sitting pretty with many more shows to his credit. He is now besotted with the idea of utilising all his energy to come out with more songs  and more shows  and captivate Konkani music lovers   as long as he can.