From the editor's desk :-

The life span between childhood and adulthood is full of fun and frolic. That is why this age in one's life can be called as the 'Golden Age', an age often equated to merry making, a tension-free life and hence popularly termed as 'Bindaas life'. None of us will ever forget those nostalgic days of our youth. But alas, if we have failed to make good use of those lovely days, mind you… they are never going to return.

After a short break I am back here again with a twinkling & budding star in Konkani who is talented, energetic, innovative and passionate! Within a short span he has four melodious music albums to his credit. This young and talented musician I'm going to present to you today is none other than Ajith Peter D'Souza.

I trust like other episodes of mine, you will enjoy listening to this special 'young' chord too. It is my wish, that many of our youngsters may take example of 'Ajith Peter' and by making good use of their talents, shine in this world and make great use of their youthful days.

My special thanks to my buddy Florine Roche for making the episode possible!

I shall see you shortly with yet another sweet chord of music on this exclusive music column. Until then, bye.

Young, talented, energetic, and innovative and perfectionist - are some of the adjectives that can be attributed to Konkani composer/songwriter/singer Ajith Peter D'Souza. His music known for its juvenescent vigour has found acceptance among Konkani music lovers irrespective of age. A passionate composer that he is his music reflects a rare blend of mellifluous melodies and magical rhythm. Adds to that rare talent is his penchant for perfection, one rarely sees in Konkani music in this part of the coastal region. With such perfection that too at a young age of 35 coupled with oodles of talent Ajith has succeeded in creating an imprint in Konkani music field and that too in a short span of time. 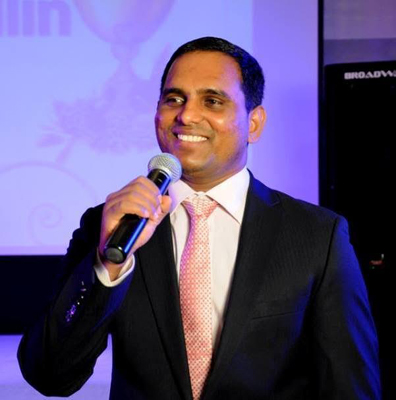 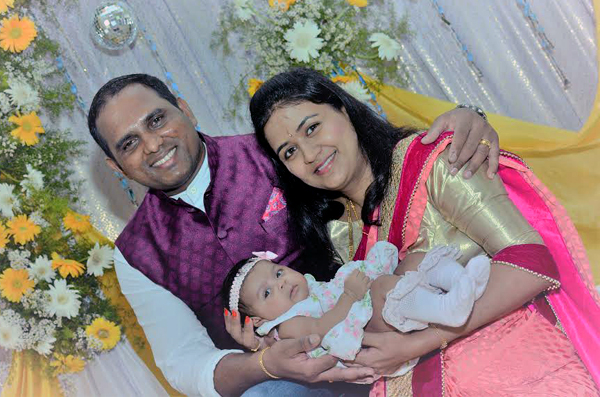 Born in Pethri in Udupi Ajith is the only son among the five children born to Justhine and Robert D'Souza. He had his early education in his native place in a typical rural setting. The bucolic surroundings of his native place with greenery all around and a river running just behind the house proved to be the right backdrop acting as the trigger in unleashing the poetic imagination of this young musician. Ajith's father who was working in the gulf kindled his interest in music initially as he used to bring audio cassettes of Konkani, Hindi and English songs when he came down for vacation. In the process of listening to these tunes Ajith also started to hum some tunes. Listening to songs on radio and television further enhanced his interest resulting in the creation of his own tunes. Ajith went on to do his MA in English and MBA in human Resource Development and then went to the gulf for employment.

Ajith says that it was primary school teacher Geetha who in a way can be considered his guru because the initial push she gave proved to be a major stepping stone for his achievements in the music field. Geetha teacher often used to cajole him singing songs during free time in school. Since Ajith liked singing he used to happily oblige his teachers and the first song he rendered was Vande Mataram. That was just the beginning. The composer/poet in Ajith got another trigger when he listened to a Nadeem-Shravan song from the hit movie "Ashiqui” rendered by a singer at a wedding reception he attended. It was then and there he decided that he would compose songs in future.

After his high school he took training in music from Capuchin priests who were instrumental in harmonizing his music talent. He learnt western music from Fr Ben Britto and is still in touch with him. He is also grateful to Fr Paul Melvyn D'Souza, Fr Salvodore Fernandes and Fr Jeevan Demello for their support in their own way. Ajith also learnt basics of music from various institutions in Bengaluru.

With music only as his passion Ajith has composed over 50 songs in Konkani and other languages and has released four music albums – the first three albums were released in three successive years. That all his albums have been well received clearly exhibit his potential as a composer with an innovative streak. The first album tittle "Tuzo Sangath.".. feeling personified was released in 2010 followed by his second album within a year "Ye Lagin... in my arms in 2011. His third album "Tuje Vengenth."... feel the sensation - was released in 2012 and in 2015 he released "nthe yevncha vella.".. into my hearts. 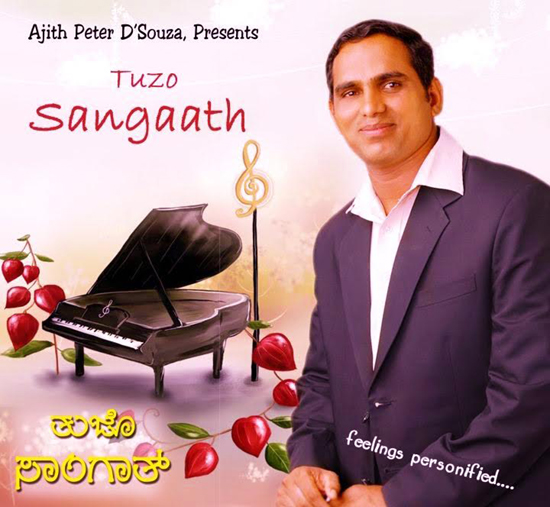 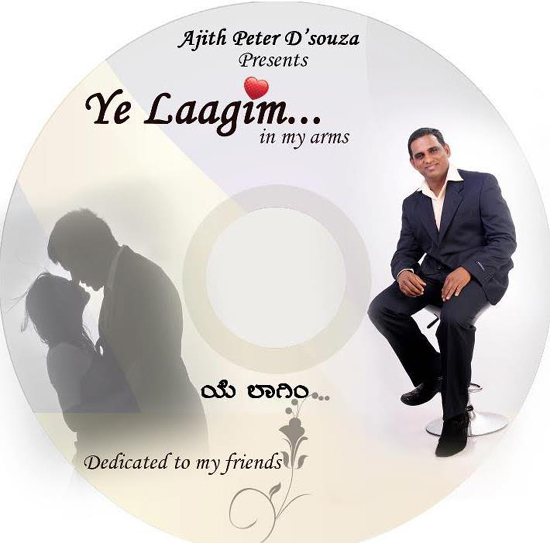 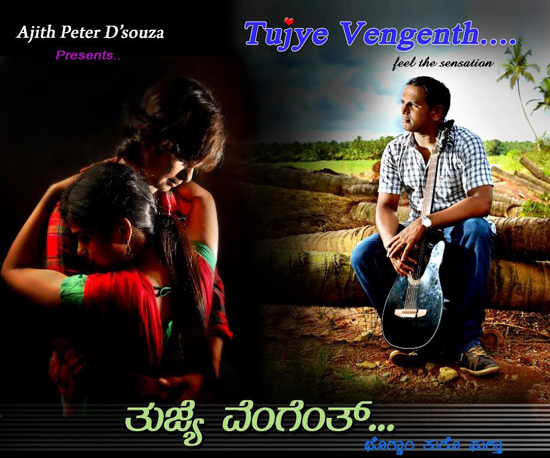 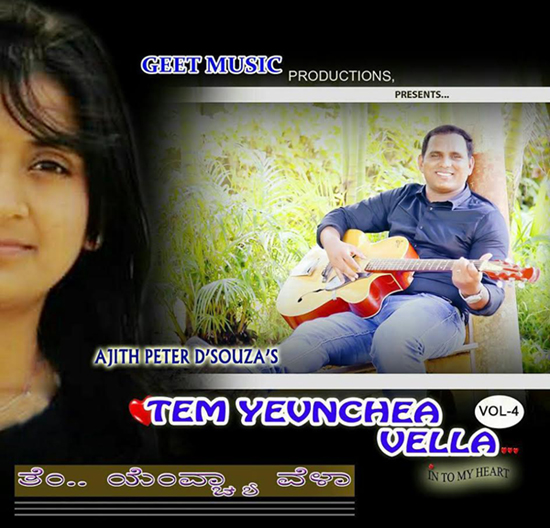 That Ajith had arrived on Konkani music scene was evident from the fact that his second album succeeded in getting nominated for 4th Konkani Global music award. He went a step ahead with his third album "Tuje Venganth” getting nominated in all the six categories for the Global Music Awards. The album won awards in four categories – best female singer for Anita D'Souza, best lyricist for Wilson Kateel, best music arranger for Roshan D'Souza and the fourth award for best music album to Ajith. The positive response his albums elicited has enthused Ajith a great deal. He says the feedback from the public received through mails and messages has helped him to know his pitfalls and take corrective measures.

That Ajith is multi-talented is evident from the fact that apart from his work in the music field he has tried his luck in theatre and television. He acted in a tele-serial "Mahayana” for Kasturi channel in a small role in 2009. He says positive support from his family especially his wife Linet has been very crucial in whatever he has been able to achieve so far.

With his music knowledge as a composer and lyricist Ajith gets invited to judge music competitions in Mangaluru and abroad. He was one of the judges at the GVOM semi-finals in 2014, which was held in Bahrain and Muscat.

In an email interview Ajith who is in Dubai with wife Linet and 11 month old Geet Clare D'Souza says that whatever he has achieved so far is little and he has miles and miles to go. Of course, considering his young age we can expect some rare gems to come out of this talented young man's closet in the days to come.

He does not boast of a musical lineage but is a self-made musician whose musical virtuosity has won him lot of accolades and admiration from Konkani singers and aficionados. He says training in music is necessary in the present day scenario to strengthen the foundation on which a musician can explore, experiment and prosper. He further adds: "Today we have extremely talented children and youngsters and there is stiff competition in the music field. Due to limited resources many Konkani singers don't get an opportunity to get trained in music. I would say basic training would enrich the capabilities of the singers and constant practice would pave the way for improvement. If a musician has an ear for music then that in itself serve as a strong edifice on which the musician can go on perfecting his talent." 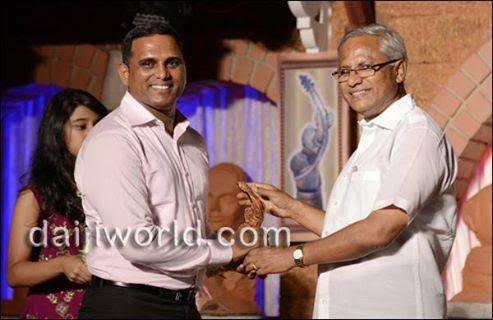 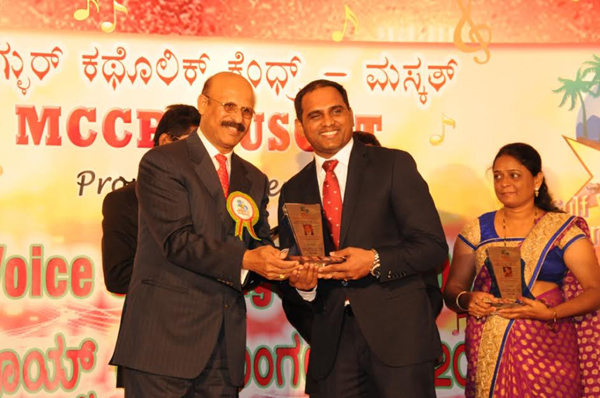 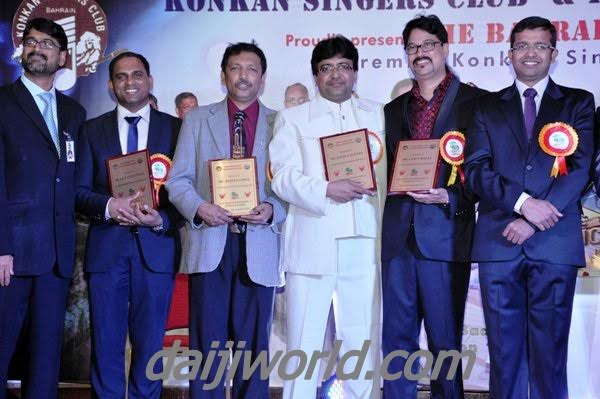 Though he does not have a favourite composter/trainer in Konkani music he opines that some of the best known musicians s in Konkani music field both present and past, have influenced and inspired him a great deal. "All those who have worked to keep Konkani music alive and vibrant have motivated me in their own way”, he states as a matter of fact. Ajith who is more of a composer than a song writer or singer wants to innovate and experiment by composing music of different genres. He says he feels humble when he gets feedback from people who listen to his y music and appreciate his work.

Ajith firmly believes that Konkani music will thrive given the chance that singers/composers try to experiment and innovate and keep abreast of the latest technology in music. He adds: "Today we see there is abundant talent around us and there is no monopoly or dominance by a few people. It is big ocean out there where in people can try newer ways to entice music lovers. Of course the survival and longevity in the field will solely depend on the quality of the music." He is of the opinion that the challenge for Konkani musicians and singers in today's world is to opt for other modes of presentation as the use of CD's is on the downslide. Doing some meaningful contributions to Konkani music is part of the grand future plans of Ajith.

Poet Wilson Kateel says, "One notable quality of Ajith is his fondness for perfection which is not normally seen among musicians these days. That zeal for perfection has adequately reflected in all his albums. His music arranger Roshan D'Souza would certainly vouch for this."

With so much talent and energy where can we see Ajith Peter D'Souza in Konkani music ten years from now? Ajith replies with this oft repeated para from Robert Frost's poem which sums up what he has to say.