From the editor’s desk:-

Once again I extend you all a hearty welcome to your favourite music column on Daijiworld online!

As we all can see the enormous talents illuminating the Konkan skies studded with great music stars and I was really struggling to present to you yet another shining star for this month. Wow!!! I found not one but a bunch of incredible stars of one ‘Sound of Music’ family to decorate this music column. What a coincidence...Do..Re..Me..Fa.. seven notes of music and seven highly talented children of one family. They say... the family prays together that stays together! Recently someone mentioned to me that the family laughs together that stays together! But today I say... the family sings/plays music together.. stays together!
Dear music lovers let me present to you the very first ‘Sound of Music’ family that ever decorated this music column is none other than the ‘Abreo family’. I truly salute highly talented Konkani couple from the United States Nikole and Dr.Gerard Abreo for raising their lovely seven children as amazing violinists!

I am so indebted to my buddy Florine Roche for playing this lovely music. I am sure you will really enjoy listening to this sweet chord of Sound of Music.

Once again I wish to thank every one of you for taking your time in browsing this music column. See you then, next month, same portal and same column. Until then, bye! 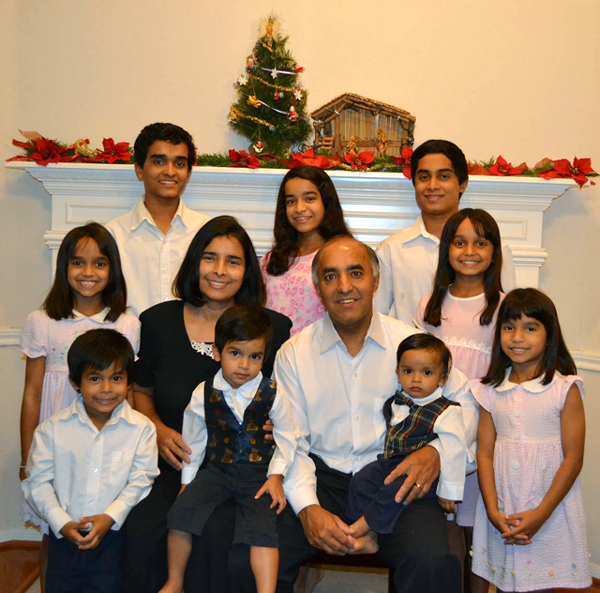 When the seven children of Nikole and Dr Gerard Abreo stood on stage to give a violin performance at the Little Sisters of the Poor in Bajjodi in Mangalore on June 24, 2015, I could not help recall the seven singing children of one of the most famous stories ever told through 1965 Broadway musical hit “The Sound of Music”. The only difference was that these 7 siblings did not sing but gave a violin performance much to the excitement of the inmates of the home at Bajjodi and also music enthusiasts who had come to see and hear the famous seven siblings performing together in one stage.

Needless to say the very act of seven of the nine children of Dr Gerard and Nikole Abreo giving a violin performance during their week-long vacation from US had created quite a flutter in Mangalore city. The seven children in the age group of 17 to 5 lived up to the pre-programme euphoria by giving an awe-inspiring violin performance.

Music connoisseurs were ecstatic witnessing the five-song disciplined performance presented by these children. The performance won abundant praises for the musically inclined family. It can be rightly said that music flows in their blood, veins, heart and minds and in the entire family.

Nikole’s is the daughter of Gerard Joseph Lobo and Hazel Lobo hailing from “Sangeet Ghar” Bejai. Gerard Lobo was a musician of competence who used to play Guitar, Violin, Accordion, Clarionet and many other music instruments. Her Uncle F M Lobo, who owns the Cascia Tile Factory is also a great violinist and may be the Abreo children, must have inherited their love and talent for violin from their grandfather and uncle. Nicole’s parents were working in Kuwait and immigrated to Canada in 1982. Nikole was brought up in Toronto where she graduated in music from Toronto University. Nikole has another sister Leslie who lives in Detroit with her children. 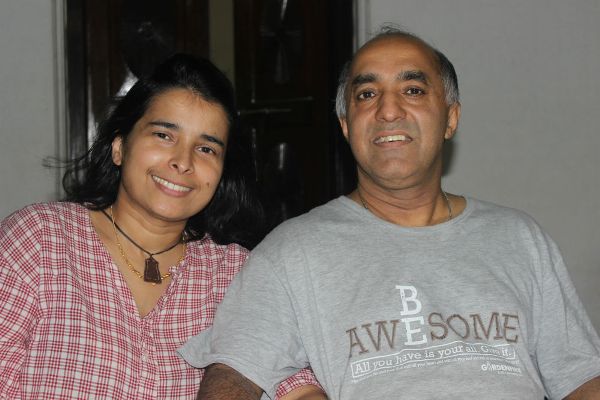 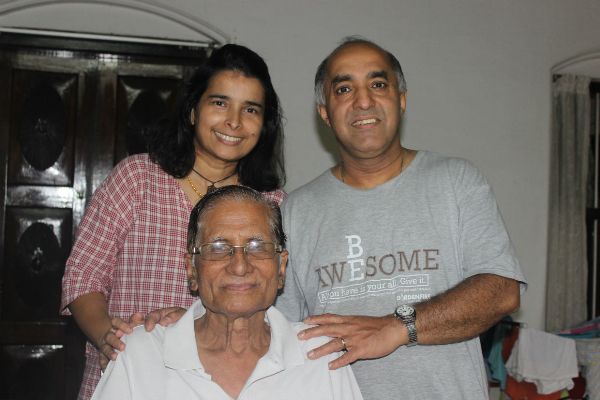 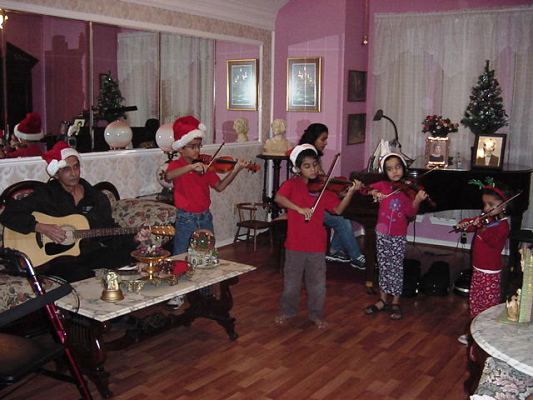 Gerard’s parents Walter and Ena hailed from Kulshekar in Mangalore but moved to Bengaluru and all the Abreo siblings were born and brought up in Bengaluru. Gerard did his MBBS from St John’s Medical College, Bengaluru. He is a drummer and belongs to the famous ‘Abreo Quartet” as the siblings were known in Bengaluru a few decades ago. Gerard’s elder sister Patricia was playing Banjo, the stringed musical instrument of African origin, brother David was a guitarist and younger brother Peter played Tambourine. So the Abreo Quartet was a much sought after band at weddings, parties and other social gatherings in the garden city. Gerard reminisces “when I was 8 year old my father saw me playing on the table using my hands and brought me a small drum set and I began to practice. I even remember that a potty chair was converted into a drum by turning it upside down”. During his stint at the St John’s Medical College in Bengaluru Gerard had started a music band titled “Musical Mann” which went on to stage many musical performances for nearly five years. The siblings are now spread out in different parts of the world. David is in Dubai, Patricia in Mumbai and Peter is in Bengaluru.

In this age where one child is the norm it is quite surprising that the Abreos have nine children (five boys and four girls) so far and it hasn’t been full stop there as of now. There is every possibility that during their next visit they might have another addition to the existing family and 9 children might queue up to give violin a performance on stage. Aren’t having 9 children a hand too full, I keep mulling. My curiosity got the better of me and before I could ask this question to the Abreos when I met them at their “Sangeet Ghat” home in Bejai they had answered my doubts. “We believe children are gifts from god. It does not mean we don’t go for family planning. We adopt natural family planning and have not used any type of contraception”, Gerard asserts. “I don’t want my wife to consume poison in the form of contraception tablets that paves the way for many diseases. There is a relationship between contraception and breast cancer and increasing suicidal tendencies”. 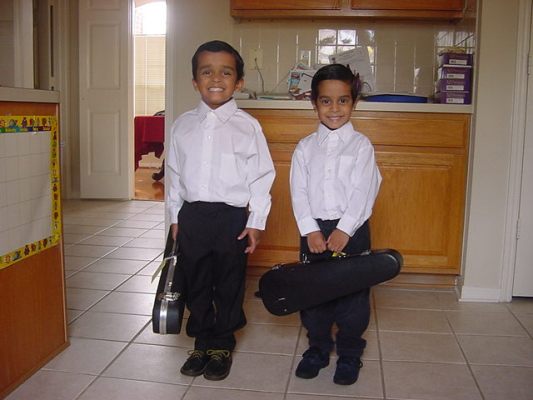 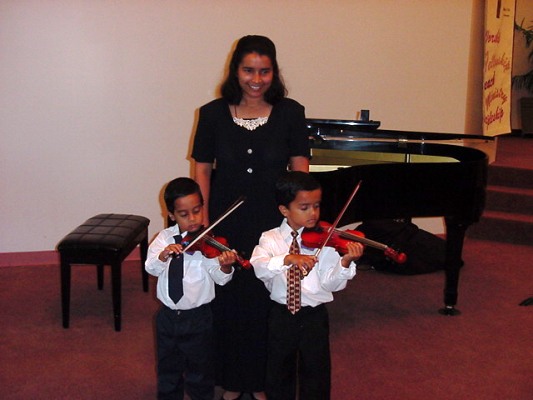 Attracting eyeballs wherever they go is something which the family is accustomed to over the years because of the large brood. “It is not just for the music performance that we attract attention”, says Dr Gerard with a mischievous smile. “Moving around with nine kids and that too with their musical instruments in toe is quite a rare scene and naturally it invites attention of all”. Gerald recalls an interesting incident during his recent visit to his brother in Dubai. The security guard at the airport could not hide his inquisitiveness looking at the big group of kids and asked Gerald whether they all were his children. When he answered in the affirmative he asked whether they were from the same mother. He was then curious to know who the mother is because he had mistaken Nikole also to be one among his kids.

There was another curious question I wanted to ask the Abreos desperately – how do they travel when they have to go out together. Nikoles tells me that the family has a 12 passenger truck in the US that comes in handy whenever they have to travel together. Now that the eldest son Michael is 17 he volunteers to be in the driver’s seat, says a beaming Nikole.

Needless to say that music runs in both the families of the parents and they are bent upon continuing the tradition through their children. The last of the nine children is just 1 ½ years old and the Abreos are not ruling out additions to the family in the coming years. The responsibility of bringing up nine children is shared by the couple though their schooling and training in music is shouldered by Nikole. The children are home schooled till 7th grade and teaching violin starts from the age of three. The Abreos say they are blessed with a very good teacher in Mrs Stanely, who they say, has been instrumental in training their children. The children are also learning Piano because they feel that learning Piano supplements learning violin. 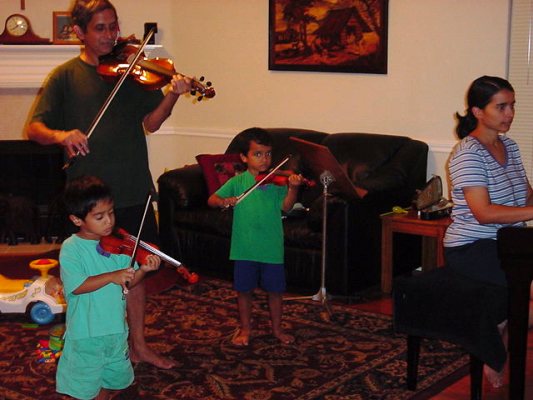 With children growing up, the task of playing music on their own without depending on professional accompanists has become possible. Now the eldest son Michael Joseph accompanies the group on Piano during their performances.

The family firmly believes that music has a curative and comforting impact on patients especially those who are sick and are at the twilight of their lives. The family plays for hospital patients and other charitable homes whenever they get an opportunity especially during Christmas times in the US. Every year the family plays at a Christmas party organised for the very sick. Gerard points out “when they play for my patients they get to see their suffering and that make them humble. Many patients have expressed their joy listening to our performance and have confessed they give up the fear of death”.

After one such performance a lady had come asking the Abreos to use their photographs with wordings “unto us a child is born” to be used as a Christmas greeting. Though the Abreos initially hesitated they later agreed and the card got tremendous response. Now every year that particular lady sends greeting cards with their photographs and special words.

Though born and brought up in US the Abreo brood love coming to India and they simply love Mangalorean cuisine. “It is wrong to say they come here to give a violin performance. It is actually the other way round – they come here and the performances just happen” says F M Lobo, Nikole’s uncle. The Abreos also performed in Bengaluru before their performance in Mangaluru.

Apart from music the Abreos are closely associated as benefactors with many old age homes, orphanages and institutions working for the poor, the underprivileged and the handicapped in Bengaluru and Mangalore and other places.

The Abreos part with a retort that sums up their positive attitude when they say “music has gone beyond the practice room and is not just for the sake of giving performances. It is actually a tool to share the joy with the community”. The Abreos really deserve a pat on the back for keeping the musical tradition alive beyond the shores of India and also for sharing it with us through music and their large-heartedness.