Once again a hearty and a warm welcome to your most favourite music column ‘Do..Re..Me..Fa..’. I am truly indebted for your unstinted great support and encouragement that keeps us moving in our marathon walk in this vast music arena.

In this distinctive music column I am presenting to you a unique star that became immortal in the year 2008 after spending 87 fruitful summers on this planet. He was a great Konkani song composer/lyricist but tragically never got any substantial support from Konkani music fans and now all his creation has reached the brink of extinction!

I am talking about one of Konkani Music legends, the composer of all time favourite "Dhorya Kushin Fud Korun.." the popular and hummable fishermen song. He is none other than (late) Ben Sequeira who is no more with us! I am deeply indebted to my buddy Florine Roche for all her exploratory work in presenting you this unique melodious chord!

Thank you dear browzers for taking your time out to browze this column and enjoy listening to this sweet chord of music. We shall meet again next month, same site and same column with yet another Konkani music sensation. Until then, bye! 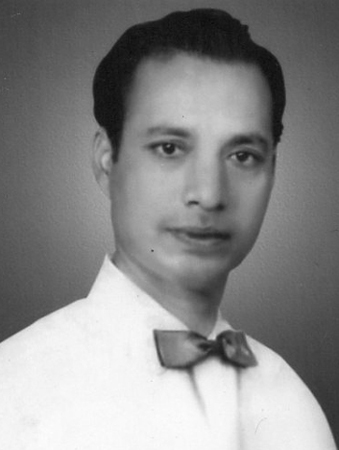 Passionate lovers of Konkani music might be familiar with the popular and hummable fishermen song 'Darya kushin fud karun....' But most of us may not be aware the composer and lyricist of this evergreen song. It is also not known to many of us that the lyrics and tune of the original song has been changed to convert it into peppy song when it was recorded for the CD or even before that. Yes. When it comes to Konkani musicians be it singers, composers or lyricist the name of late Ben Sequeira might sound like a distant dream. Many of us including the younger generation might not have heard of his name though he lives with us with some of his songs. It is a tragedy for Konkani music lovers that most of his songs will grow fainter into the realm of past as they are not into CD’s and those who sang the songs for Ben’s musical nites are old and have forgotten the full lyrics though the tunes are still fresh in their minds.

Ben Sequeira, the composer and lyricist whose songs personified his love for nature and the surroundings around us and also wrote Konkani hyms, died in 2008 at the age of 87. He has left behind a rich legacy to Konkani music lovers through his songs and hymns. Unless efforts are made to preserve his songs in the form of CD Ben Sequeira’s contribution to Konkani music will be forgotten soon. His wife Judy Maria Teresa who is in her mid 60s and is quite active shows me a big bundle of file containing lyrics of the various songs and hymns written by Ben.

Ben was born in 1902 in Chikkamagaluru as the eldest and only among the four children that included his three sisters – Margaret, Asuntha and Brigitte. The family came to Mangaluru when Ben was 2 years old. Judy recalls that Ben was working for Olivet Brothers in Valencia as an artiste doing crafted and concrete statues. Judy recalls that she was quite impressed by the voice of Ben when she heard him sing at a marriage in Omzoor, Farangipet which she attended. But destiny had its own plans though she says she never imagined that she would end up marrying him. It was an arranged marriage as one of Judy’s uncles who, was also close to Ben’s father was responsible for their alliance. Despite the huge age gap Judy married Ben in 1962 and they had settled in Valencia as Ben was working at the workshop of Olivet Brothers.

The renaissance period in the 60s proved to be the bane for Ben and family as he lost the job as the workshop was closed due to lack of exports of statues. It was quite a turbulent period for Ben’s family. By now Judy had converted the small shed of her husband into a tailoring shop to supplement the income. "Those were the days when women were not working and I may be the first lady tailor to stitch clothes for others by keeping an exclusive tailor shop," Judy reminisces.

After losing his Job Ben sold the property in Valencia and bought a new place and settled in Kulshekar. He tried to sculpt statues in the new place but shortage of water proved to be the undoing. "There was shortage of water in Kulshekar and I remember paying 25 paise for one bucket of water," Judy recalls. It was during this difficult time when there was no job that Ben began to concentrate on his innate talent of writings and composing Konkani songs. He had some training in music from Fr Walter Albuquerque which must have given him the basics of music. It is difficult to imagine how he could think creatively when he was faced with so many difficulties.

Judy remembers how he used to sit late at night whenever he had to compose songs. "His songs were like a tribute to mother nature and the surrounding we live in. He got his inspiration from the sounds of chirping of birds, the sound of rain, the flowing water or the sound of the strong breeze. This is evident in his songs as a majority of his songs has nature as its theme." 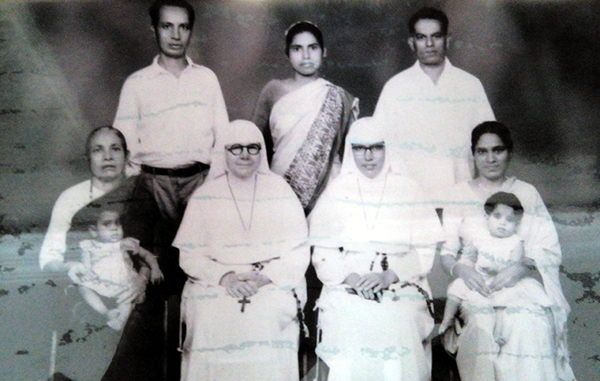 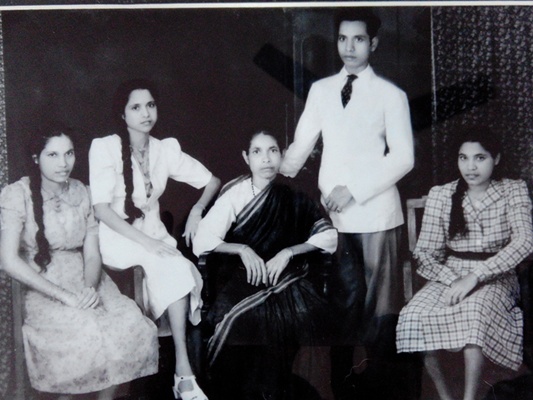 Creativity in times of difficulty

Some of the songs written and composed by him were sung by Ozzy, Dulcin, Michael and the three sisters Benedicta, Mariet and Jacintha. Judy tries to remember some of the songs that became popular though she is not able to recollect the lyrics fully. Songs like "Pale Khatrina Ekki Kalana," "Gaayi shuklya," "Konkan Amcho Gamv," "Joe tu baa beautiful," "Kaad Sobina Daar," "Oot Oot Apolina" "Undrache Kazar" "Sugandh Padla Raas," ‘Yego Pavlina" and "Thalya Bhovari." Judy points out that file contain more than 500 Konkani songs, which were quite hummable. Sadly Ben was not fortunate to get the services of leading instrumentalists and singers of the time who could dedicate their time for him and to immortalise the songs.

Even then Ben’s songs did strike a chord which paved the way for the first Ben’s Musical Nite which was held in Don Bosco Hall on January 1, 1983. The programme was presented by Herry Boy Ruzai. Maxim Moniz, who was the sacristan at Rozario Chuch for some time and was an admirer of Ben’s songs and also a close associate of Ben recalls the difficulties they had faced in organising the musical nite. Maxim is quite old but has a razor-sharp memory of those tumultuous times when uncertainty was the order of the day.

"Unlike today there were no mobile phones or transport facilities. Putting together the musical team was the biggest challenge and we had to literally slog. We often used to go in cycles in search of the team members whenever they failed to show up for practice so that the team could have real practice for the musical show," Maxim explains. He further continues "We had to do all the work personally because we did not have resources. 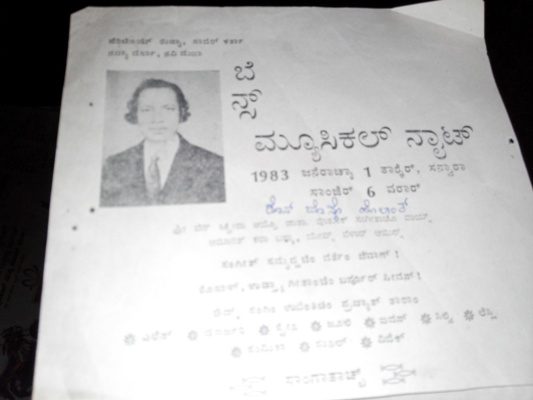 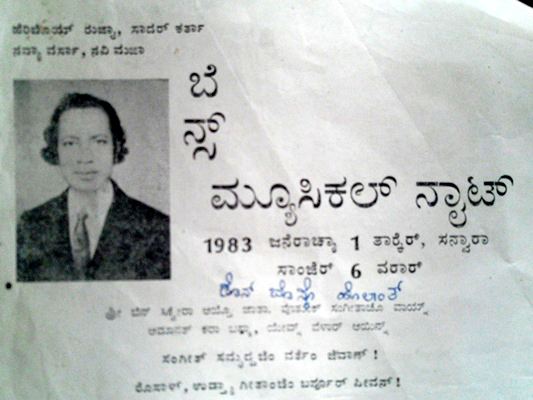 Putting posters for publicity was also a big challenge but we did it and the show was a big success," Maxim says proudly. Recalling those days Maxim points out that people who looked at the posters with the name of Ben believed he was a foreigner (because of his name) who would sing in Konkani and were quite excited.

Benedicta teacher, one of the three sisters who sang his songs for musical nites (no one is sure how many nites he presented) has faint memories of the old songs of Ben Sequeira. She is unable to recall the exact lyrics of those particular songs. Benedicta says, "Ben had a penchant for sober numbers and did not favour peppy songs. He was fond of nature and the surroundings and this is amply demonstrated in most of his songs. His songs have that earthly and rustic feeling."

Need to preserve his legacy

That Ben was able to touch the hearts and minds of people was evident from the fact that parishioners of Rosario church sang his songs for the singing competitions organised at the Don Bosco Hall and for the first time Rozario church was able to win the team championship in 1979 by singing his songs, says compere of Konkani programmes and theatre activist A L Moniz, brother of Maxim Moniz.

Judy who treasures the file of the lyrics of Ben is rueful that his songs are getting into oblivion with each passing day. She says that a few years back a leading Konkani activist had come asking for Ben’s photograph as he wanted to include his song "Darya kushin" in the CD he was producing. "He promised me that he would return the photo in a few days. But I neither got the photograph back nor did I get the CD containing the song," she says ruefully. Judy’s nephew Joe Michael Pereira, who is more like a son to her, did show some interest in bringing out a CD of his songs. As he is working abroad he finds it difficult to put together the singers who know his songs.

If that happens, music lovers will get an opportunity to savour the songs of late Ben Sequeira. That would be greatest tribute Konkani people can pay to this artiste.