In my great determination of presenting you a melodious musical chord as an 'Easter Egg' this season, I found a super star! Mellifluous Carnatic classical singing is a gift for him, which flows in his blood. He is a very popular personality in Konkani theatre and music in Kochi and Mangaluru. This unique star whom I am referring to is none other than Konkani Singing Star with a Kochi Flavour Muralidhar G Shenoy.

I wish to extend my sincere gratitude to my buddy Florine Roche for making this sweet music chord possible.

Dear Do..Re..Me..Fa... lovers, I am sure you will enjoy listening to this great singing sensation! Once again I thank you for your great support. I shall see you next month, same site, same column! Untill then, bye! 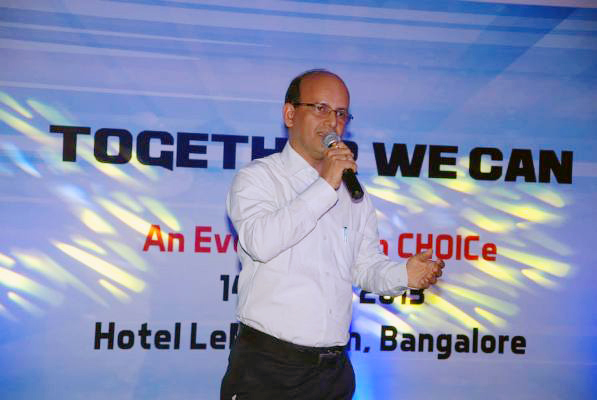 “The atmosphere at my home was quite encouraging as my parents were singing Bhajans and naturally I was drawn towards singing. It was my father who gave me the initial training in light music and mother’s customary practice of singing Bhajans instilled in me the love devotional singing. My parents wanted to make us respectable human beings and that had a pronounced impact in building my life and character. My parents encouraged me to take part in social service activities also.” Muralidhar G Shenoy

Konkani speaking people spread in the four southern states of Goa, Karnataka, Kerala and Maharashtra have contributed in their own way for the growth and prosperity of Konkani language, literature and music. In Kerala most Konkani speaking people are settled in parts of Kochi and Travancore. Though they form a linguistic minority it has not prevented them from nurturing and preserving their language and culture in their own way. There are many accomplished artistes who have attained name and fame in Konkani theatre and music in Kochi. One of them is Muralidhar G Shenoy who is a well-known name in Carnatic classical and light music in general and in Konkani music in particular.

Murulidhar, who comes across as a shy but a self-assured persona, had started singing at a tender age of 8. Initially he was more inclined towards singing light music and Bhajans. His parents who saw his interest in music decided to give him formal training. So at the age of 13 he began to learn music professionally though not on his own interest. The first experience was not a pleasant one resulting in his discontinuing his training within three months. May be he was destined to learn music and nothing could sabotage what destiny had in store. After one year he felt the urge to learn music again and this time he hit it right with his music teacher and the process continues ever since.

Even now Muralidhar continues to learn from his gurus because he believes ‘learning is something that we have to do as long as we live’. Now he is learning under Vidhwan Gopalakrishna Iyer in Mangaluru. This clearly shows his humble nature and humility, a rarity in today’s world that thrives on instant fame. “In 1983 I watched the musical hit “Shankarabharana”, which had profound influence on me. It kindled in me an interest for music and I did not let that interest wane all these years”, says Muralidhar with a sense of gratification. Though GSB’s generally have shown proclivity towards Hindustani music Muralidhar chose Carnatic because in Kerala Carnatic music was popular. 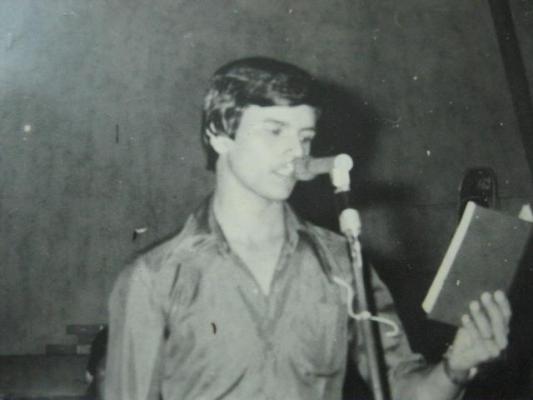 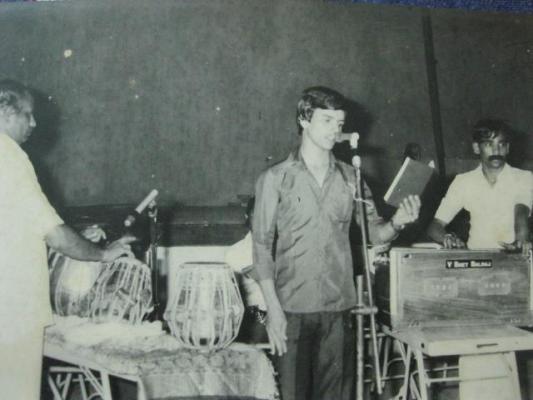 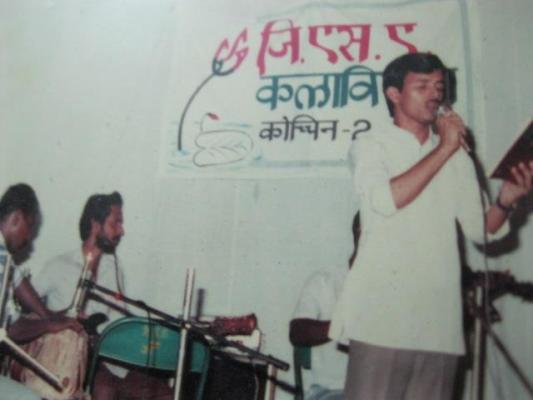 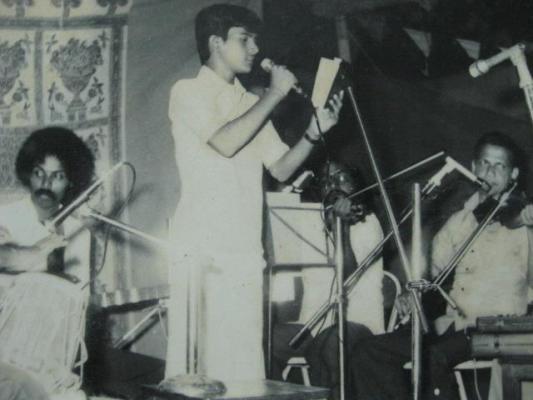 Muralidhar was born in Kochi as one of the three children of late Gnanadev Shenoy and Valsala Shenoy. He had his early in T D High School, Mattancherry Kochi and later graduated in B.Com from Cochin Arts College Ernakulam. His parents who noticed his keen interest in music nurtured his talent by sending him for learning Carnatic Classical music at the age of 13 under music maestro J Ranganath Bhagavathar of Kochi. In his 8 years of training under the great maestro Muralidhar developed a deep sense of reverence towards Carnatic music. After the demise of his guru he continued his learning under Vidwan Sri N P Ramaswami and it was Vidhwan Ramaswami who chiselled and fine-tuned his raw talent and helped him develop intense fervour for Carnatic classical music.

Initially, his journey in music began with light songs and Bhajans in Kannada and Malayalam languages. He began to win prizes at various competitions including 1st prize in district level music competitions held in Ernakulam and 1st prize in All Kerala light music competition for school children conducted by Y’s Men’s Club of Ernakulam. He continued his fine run composing music for plays and in 1988 bagged the best singer award in the All India Konkani Drama competition held in Bangaluru.

It was by fluke he got a chance to compose and sing music for a Konkani play when the producer had some differences with the music composer. The producer took the challenge head on and invited Muralidhar to his home and asked him to sing songs by composing music. That was the beginning of his entry into theatre as a music composer. Next he got an opportunity to sing and compose for a play “Geetha Chandrika” from Kerala Nataka Academy. As luck had it the play was a hit and that marked the arrival of Muralidhar Shenoy on the centre stage of Konkani singing. 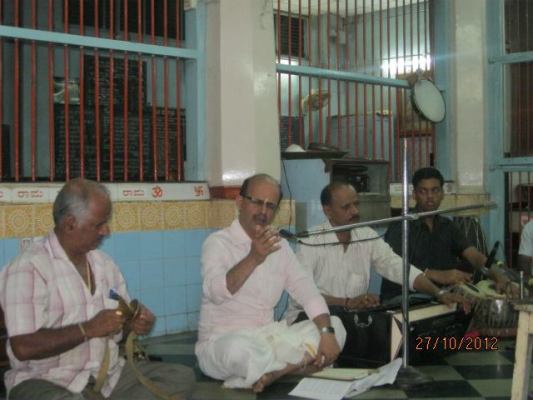 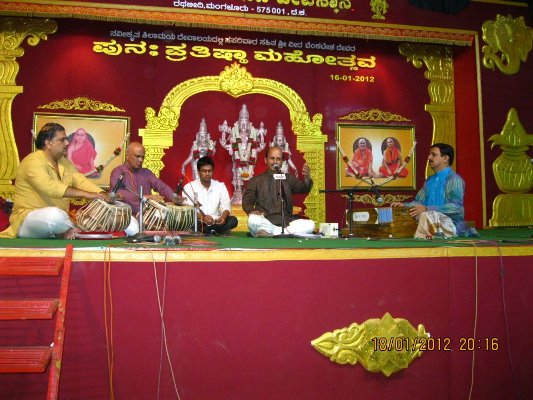 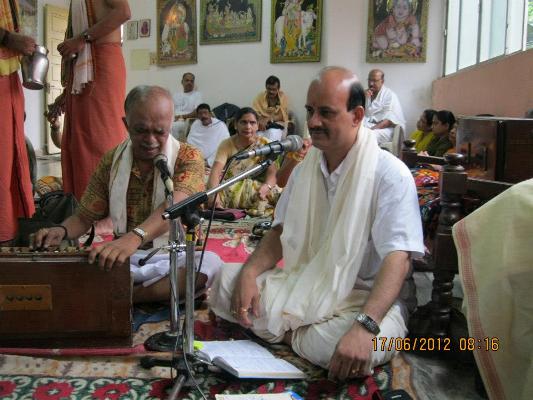 Of course, the path to success, name and fame was quite a thorny one. He still remembers how a music composer of a Konkani play had snubbed him because he felt offended at the producer for not inviting the composer’s favourite singer. But Muralidhar says “that incidents had great impact on me and I accepted it with polite dignity. The music director who was furious with me within two minutes of his teaching taught his favourite singer for 90minutes and I picked up the finer nuances of singing there”, he recalls. As a result, Muralidhar continued to be a part of Konkani theatre in Kochi as music composer until his transfer to Mangaluru in 2000. Even now he composes music for plays from Mangalore and sends them to Kochi.

So far Muralidhar has composed about 60 songs and hymns in Konkani and other languages. He has composed music for over 20 albums in Konkani, Sanksrit and Kannada. He has brought out 10 CD’s of his songs both in Kannada and Konkani. He has composed music for musical feature “Kallyana Sougandhika” a ballet in Konkani written by K Anantha Bhat for Trivandrum DD which was done under the aegis of Konkani Prachar Sabha, Kochi. For Muralidhar composing music for plays is much more challenging than composing music for albums. “In plays the challenge is to provide music based on situations and tempo of the play and that is the challenge a music composer should be prepared to take to give the desired effect. Whereas in albums the composer has the freedom to compose music of his taste”, he asserts.

The year 2000 was a turning point in his life in more than one ways. Muralidhar who works for Canara Robeco Mutual Funds (Canara Bank’s Mutual Fund) was transferred to Mangaluru and since then he has made Mangaluru his home. In the same year he passed audition test conducted by All India Radio Trissur in Carnatic Classical music. Since then he has been giving concerts in Trissur and Mangalur All India Radio stations as B grade artiste and recently has given audition for up-gradation. He has sung in the plays of Kasargod Chinna, sang Konkani shishu geet (songs for little ones) for Bengaluru DD. Along with his professional life music keeps him busy as he is being invited to sing at various places, functions and cultural programmes. I asked him whether it is difficult to adjust to the differences in language and culture of Mangalore. “There is difference in the dialect we speak in Kochi and what we speak or sing here. But by listening to songs and also by talking to people I could easily modify my singing as per the requirements here”, he declares.

Muralidhar’s work entails travelling and despite a demanding schedule he devotes at least an hour a day for practice. “I take lesson from my guru through skype and practice for at least an hour daily either in the morning or evening. My job involves lot of travel and I keep attuned to music even when I travel so that I am constantly in touch with music either by practice or by merely listening to it. Listening to music is equally important for a singer”. Music is also a great stress buster for Muralidhar who says “it is music that keeps me bubbling with energy though my job involves travelling and is hectic”.

Muralidhar’s next aim is to present Carnatic classic concert in Music Academy in Chennai and he is working tirelessly towards realising his goal. Chennai has rich tradition of music and presenting a concert there calls for practice and hold over the finer aspects of music.

Muralidhar is grateful to his wife Sandhya and son Sriniketh for their wholehearted support. With his disciplined approach and dedication Muralidhar is sure to fulfil his dream in the years to come and also serve the cause of Konkani.