Eddie uncle and Hiriyanna, our town’s foremost vegetable vendor seemed to be in a heated argument. Standing at a distance, braving the biting cold of a typical south western winter, I thought he was arguing for an extra lemon or an extra bunch of coriander. But as I observed closely, Hiriyanna seemed to be consoling him and handed him the vegetable bag or the now extinct cheela. The weak winter sun makes the moderate cold seem more intense than it actually is. At about 25 degree celcius, the temperature is not acceptable to the dwellers of Kundapur. Thick blankets, monkey caps, sweaters are all out in abundance and Eddie uncle looked like an ape with his monkey cap and blanket.

I closed in on Eddie uncle, who was covered from head to toe He was still fuming.

“Eddie uncle. Come. What happened? Why are you so mad,” I enquired.

“How dare he? How dare he call Kundapur an underdeveloped town.”

“Calm down. Don’t you know, what we the people of Kundapura are famous for, other than our Kaane fry?” Without giving him a chance to reply, I continued, “Our calmness. Come”. I picked up his bag and headed straight to Prabhu Cream parlour. 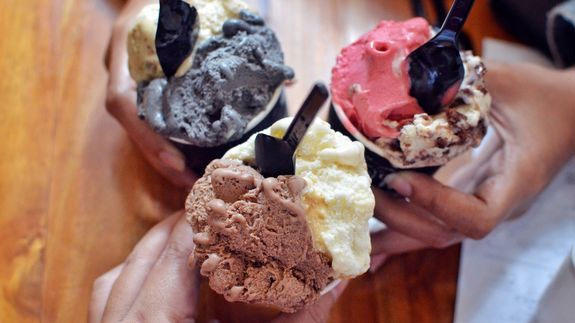 “Prabhu maam, Don Rasayana di”. We sat at the farthest corner of the parlour, which was right next to the fridge.

“Forget. I think I was over reacting”. The fridge seemed to have worked its magic on the hot headed Eddie uncle already.

“It is because of guys like you, who have their roots here, then study somewhere abroad and then leave your hometowns for big city life.”

“What is wrong with that?” I interrupted.

“Nothing is wrong. It is your life, but don’t be ashamed of your roots, your language, and your village or town.”

“I am not.” I was a proud villager, from a small hamlet called Halealve, close to Kundapur.

“Hah. I know you are not. But there are many who are- the fellow I met last night at Shetty Lunch home. The bugger after eating the most famous export from this town was ridiculing and pitying the town and its language.”

“Who was that moron?” I asked.

Our Rasayana had arrived and Eddie uncle had already gulped down half of the thick delectable fluid from the glass.

“You know him well. I won’t tell his name?” The Rasayana was working wonders.

“What was he saying?”

“First he was making fun of our Kannada. His friends were screaming words like Hoik, Bark from his car and he was laughing with them.”

“Ooh. That’s bad. Our language is one of our important differentiator. Our Kannada Professor ranked our slang second best in Karnataka. For some reason he ranked Dharwad Kannada the best, but I disagree with him. I think Kundapura Kannada is one of the best spoken slangs of Kannada in Karnataka. I don’t see any reason why people should be ashamed of the language.” My memory was kicking in information which was almost 20 years old.

“I agree,” nodded Eddie uncle and respectfully called the waiter to order a Navaratna juice. I wasn’t aware of this and he said it is a new addition to the menu.

“Second he was ridiculing our town as if we don’t have anything. It seems his distant uncle had to get married in the city as Kundapur did not have a marriage hall. Well, I told him we have the best auditorium in the state right now and our food has always been much sought after. I felt he was like a frog inside the well, with a narrow mind. I also told him about the contribution of our town to the world. People like K V Kamath, Shivram Karanth and Prakash Padukone who have not shyed from using the town’s name in their own.”

“Haha,” I had a hearty laugh. “He is a petty man. Ignore such people. Uncle, back to our language. What is your opinion about it?”

“It is a nice language and I don’t think people should ridicule other languages. Every language has its own beauty. It seems August 1 will be celebrated as Kundapur Kannada day. That will be a celebration of sorts, cutting across differences. I think everyone on the town will be elated. I hope we garner enough encouragement and make it into a yearly affair. And let us be honest, our language has the ability to shorten and liven up any conversation. What say?”

“I agree uncle. It is a good language and I hope this initiative will make it popular among its speakers and also across the state and educate people to look at others over their languages and religion.”

“I hope it also converts those morons who are ashamed of it”. Eddie uncle’s temper seemed to be coming back. His expression changed from anger to compassion. “Let me forget and forgive him. What he thinks about us has nothing to do with us. It is something lacking in him. It shows his hollowness and not ours. I hope he turns around someday though.”

The open jeep which uncle encountered the previous night was now parked right in front of Prabhu Cream Parlour. The so called moron had got his friends to taste the town’s specialty – Rasayana.

As we got out of the parlour, we heard a voice “Uncle. Hengidri. Ninne salpa jaasti koi kocch madr nann friends. Sorry.” Eddie uncle was over the moon.