Sunny Side Up: Eddie Uncle and his Money

The sun was beating down on us mercilessly and I remembered the goriest punishment I had to endure in school: standing face down outside in the sun for the entire duration of the class - 45 minutes. But here I was, being punished for more than 4 hours waiting outside the bank to withdraw 4,000 rupees and that too for no fault of mine. Neither did I have any black money under my bed, nor did I have any money stashed away in Swiss banks. Nevertheless, I was standing in the damn queue, as I believed this was a genuine attempt to curb domestic black money.

Just as these thoughts were pounding inside my head, from the corner of my eyes I saw Eddie uncle, with a couple of sacks next to him, waiting in the queue. I felt he was averting from my gaze.

"Hey Eddie uncle. Come here and stand with me. We can at least have a chat and pass time." I screamed towards him.

"It ok Uncle. Two more hours of waiting is not going to harm you. Anyways, what work you have at home other than eating and sleeping."

"Hmm. What the hell do you think we old people do, you moron. Is this the respect you give to an old man ...." There were a barrage of angrily mouthed words which the lady standing behind him did not like and she, along with others thought it wise, to let me and Eddie uncle stand next to each other.

"No. Looking at these bags, I thought the bank people will come and take me in as a privileged customer. Nothing of that sort has happened." He was furious.

"Ha ha uncle. By the way, you have come to deposit or withdraw?"

"Close to 5 lacs, which I kept aside for house repair."

"Oh ho. You too Brutus. You are one among them - a black money hoarder uncle. I never thought you would do this. Why do you guys do this and deprive our country of money?" I was furious. I continued, "5 lacs for house repair!!!. What a lame reason. Are you building a new house?"

"What?" Eddie uncle had a expression of shock on his face. "Do you know how much material costs have gone up?"

"You guys keep cash at home and do you know what happens? The government is deprived of an enormous amount of tax from this, which could be put into infrastructural development, rural development..."

"And also politician development. What about all those scams - 2G, Coal, Fodder, Vyapam,chit fund and god alone knows how many more." Eddie uncle continued for me.

"Whatever uncle. You are a black money hoarder and because of you, our country is bleeding." I was blunt.

Both of us stood there in silence.

"Anil. I somehow feel, this decision was nothing but a political gimmick as this government is midway of its term. All the grand electoral promises are not fulfilled. There are people waiting to get some money into their accounts. Bringing money from outside is not child’s play and having realized that, something had to be done to catch the imagination of poor voters, and here we are." Eddie uncle gave his blunt review on the demonetization.

"Uncle. Do you realize that it takes guts to take a bold decision like this? Which government has taken it so far? It is easy to point fingers uncle. It is very tough to take a stand and implement."

"Implement?? You call this chaos implementation?" Eddie uncle was now on top of his voice. 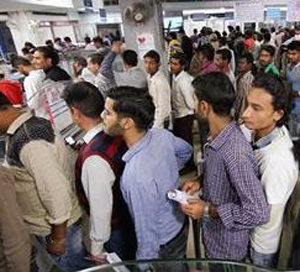 "I agree, there have been a little discomforts. But don’t you stand in lines waiting in religious places or to buy tickets for your favourite movie? The government has asked for 50 days and everything will be sorted in 50 days. Minor discomforts like these for the better and bigger good should be taken uncle." I tried to explain to him the secrecy behind the demonetisation and its effects.The sudden declaration caught the offenders with no time to find alternatives.

"Go and tell this to the families of 50 people who died Anil." He simply put an emotional, personal common man touch to demonetisation.

I wasn’t able to say much as there were deaths and yes, death is the end to a life and one cannot do much to bring a dead person back to life. The families of the deceased will have to suffer for their entire lifetime.

The line to the bank was getting shorter. For a change the banks were playing it smart, by organizing the chaos well.

"By the way, why have you come here?" Eddie uncle had a hint of sarcasm in his tone.

"Well. I have come to check out the new 2,000 rupee note. Uncle you guys should start using cards, electronic wallets and online modes of transactions. Because of you, the government is finding it difficult to implement such strategies."

"Anil, forget internet, there is no proper electricity in our village and you know it well. Moreover what do you expect from scores of villagers like me. Strange Anil. One government says farmers and rural development is their agenda, one government says digitize India. I think poor people like me, will always suffer. We have to live like a common man, and die like a common man."

Just then it was Eddie uncle's turn.

"Arre uncle!" Poornima, at the desk, whom uncle knew very well greeted him.

"Ale ge, I need to deposit 5 lacs to my account. All the notes you gave me last week are now useless."

"Uncle, if you deposit this amount, you might get a notice from the IT department. I know this is your life savings you withdrew last month to repair the house."

"Yes, my dear, plus some money my children sent to me. What do I do? Anyways, you deposit it. I will pay the tax and penalty. Hope this money will give us some benefit. Hope my son’s educational loan is waived off from the deposits earned by the bank."

I was standing right behind the old man, eavesdropping on the conversation. I was shocked. I just realized that a common people will do anything slapped on to them by the government.

"If I can help, uncle, deposit half of it to my account. Give me the cash. I will deposit. I will then transfer it to your account or withdraw it." I don’t know why I said that, but it felt right, just like how I felt right about demonetization.

"Thanks son." It was genuine thank you from a common man.

After we deposited the money, I was quiet and so was Eddie uncle.

Breaking the uncomfortable silence I said, "Come uncle let us have a cup of tea," and we went to a nearby hotel where there was a big board - "NO CHANGE".

"Hmm. Uncle . I think we can’t have tea here. We need to go back home and ask aunty to make some for us."

"Don’t worry son. This black money hoarder has stashed some 10, 50 and 100 rupee notes too. Come I will buy you tea. Even you will be honoured to have shared a tea with a black money hoarder." There was sarcasm and a strange "can't be vented" anger in his tone.

I have never been so confused all my life. "Uncle, I don’t know what to say. I am really sorry."

"Don’t be Anil. That is ok. I am a common man. I am supposed to be used to these things."

There wasn’t much to say. This was one of our only encounters where neither of us had spoken a word through the tea. Things were changing in India and I hoped they are for the common good of its vast majority of common people.

Title: Sunny Side Up: Eddie Uncle and his Money