A Rainy Morning in ‘Mangalore Rise’

This piece of writing was supposed to be published with the impressive title ‘A Glorious Sunrise in Mangalore Rise’ with a video capturing the grandeur. But instead, as the saying goes ‘Man proposes, God disposes’ - that was not the case to be and the heading had to be altered to ‘A Rainy Morning in Mangalore Rise.’ The weatherman had predicted a perfect sunrise with blue skies, and the rains only late in the afternoon on Saturday, August 19, 2017, in ‘Mangalore Rise’, a one way hill road in the suburb of Whittlesea, approx 58 kms north-east of Melbourne CBD. The weatherman, being human after all, had got it wrong once again.

When we - accompanied by a couple of families set out early morn during astronomical twilight at about quarter to six from our home in Narre Warren, a suburb almost at the edge of the earth, the stars were twinkling in the sky. The crescent moon though waning was perfectly visible. Our ultimate destination was a country town on the far north of the State of Victoria almost touching the southern border of the State of New South Wales. Around an hour and a quarter into our onward journey, we intended to make a stopover at ‘Mangalore Rise’ and timed our visit to the beautiful sunrise that was at a minute past seven.

Half way through our journey during nautical twilight to see the sunrise on ‘Mangalore Rise,’ within a matter of minutes the weather suddenly changed as it often happens in this part of the world. Grey clouds appeared in the sky from nowhere and soon it began to pour. The rains that were predicted for late afternoon appeared to have advanced. The downpour brought me back memories of monsoons in Namma Kudla. It was a drive in the heavy rains with the windscreen wipers swinging at its maximum at both ends with the wipers excited as they met only when it rained. The showers (tunturu male) go on for hours while the rains are usually brief here for around 10 to 15 minutes before it withers away, but this downpour prolonged as it continued to pour for quite a while.

Driving albeit a bit slowly, in about an hour, we reached Doreen, the adjacent suburb of Whittlesea where ‘Mangalore Rise’ is located. By this time, it was a gloomy civil twilight. The downpour had just stopped but the clouds were still hovering around the sky. Thence, in about ten minutes, we were turning right to the Ridge Road from Whittlesea-Yea Main Road and travelling another 100 metres turning right again, we entered ‘Mangalore Rise'.

As stated above, ‘Mangalore Rise’ is about 58 kms north-east of Melbourne Central Business District and is in the suburb of Whittlesea. The Local Government Area (LGA) or the Council is also called by the suburb’s name. The road ‘Mangalore Rise’ has the same entry and exit without any through road and such a street with a single entrance and exit is called a Court. ‘Mangalore Rise’ is an elevated Court so to say with a sensational view of the surrounding areas as before its residential development, it was a mountain full of greenery. The elevation is such with the eastern side open to glorious hills and with the sun rising behind it, the term ‘Rise’ was preferred instead of a Court. The whole stretch of the rising road is about 300 to 350 metres.

The houses on the western side are on a much higher footing as the hill rises that way as compared to the houses on the eastern side which are on a lower terrain with all of them nevertheless having a stunning panoramic view of the spectacular sunrise. The topography being so uneven on this Street, it reminded me of certain areas of the turf in Namma Kudla. The valley below was breathtaking and was a sight to behold and the surrounding greenery added lustre to the already splendid landscape. The solar energy was made good use of with solar panels installed on almost every house.

But for now, we need to be content with our journey through ‘Mangalore Rise’ without the sunrise through these pictures. After our initial visit here, we had been to the town centre to have breakfast and returned in about an hour or so to click some ‘bright’ photographs in the given circumstances. 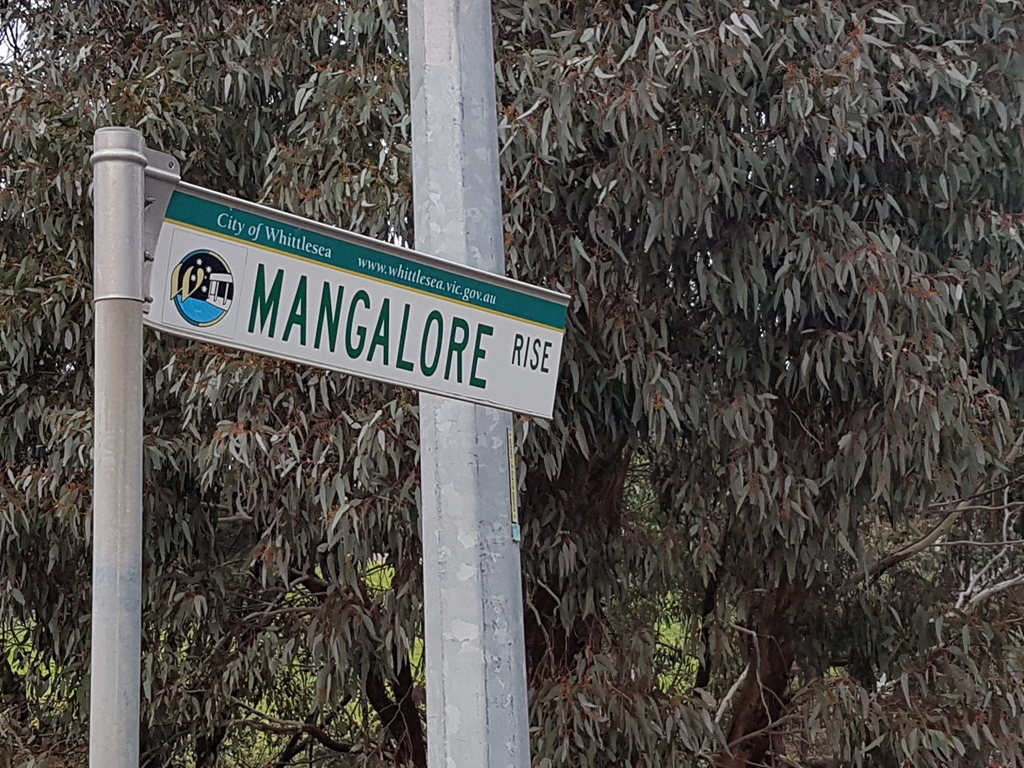 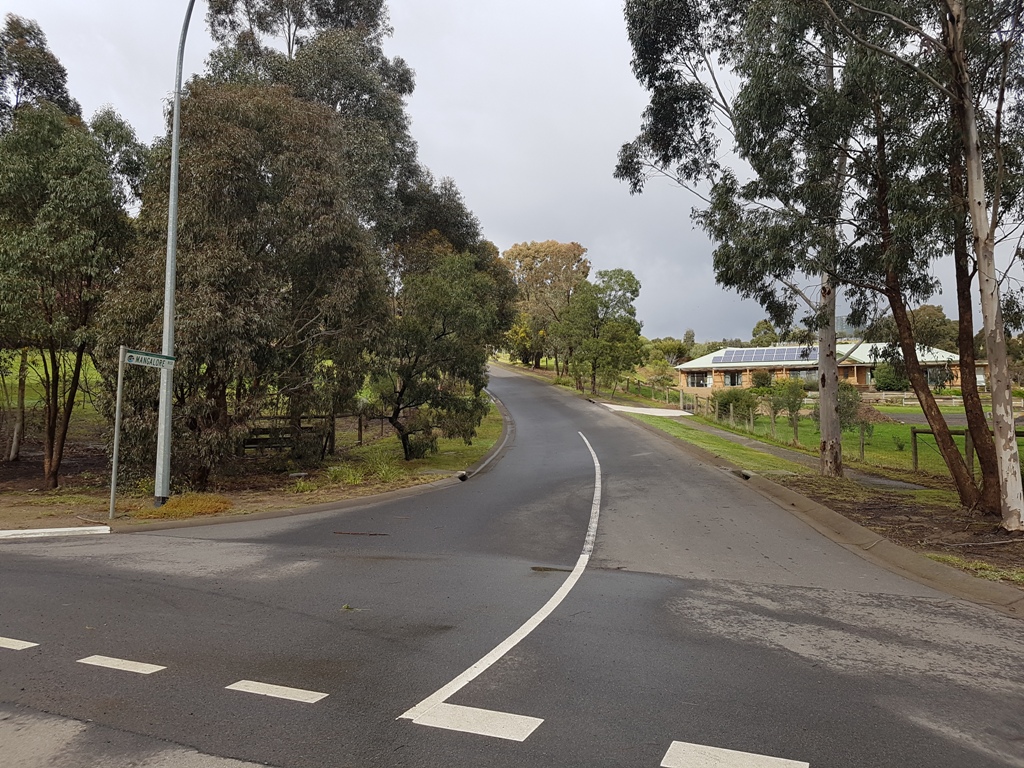 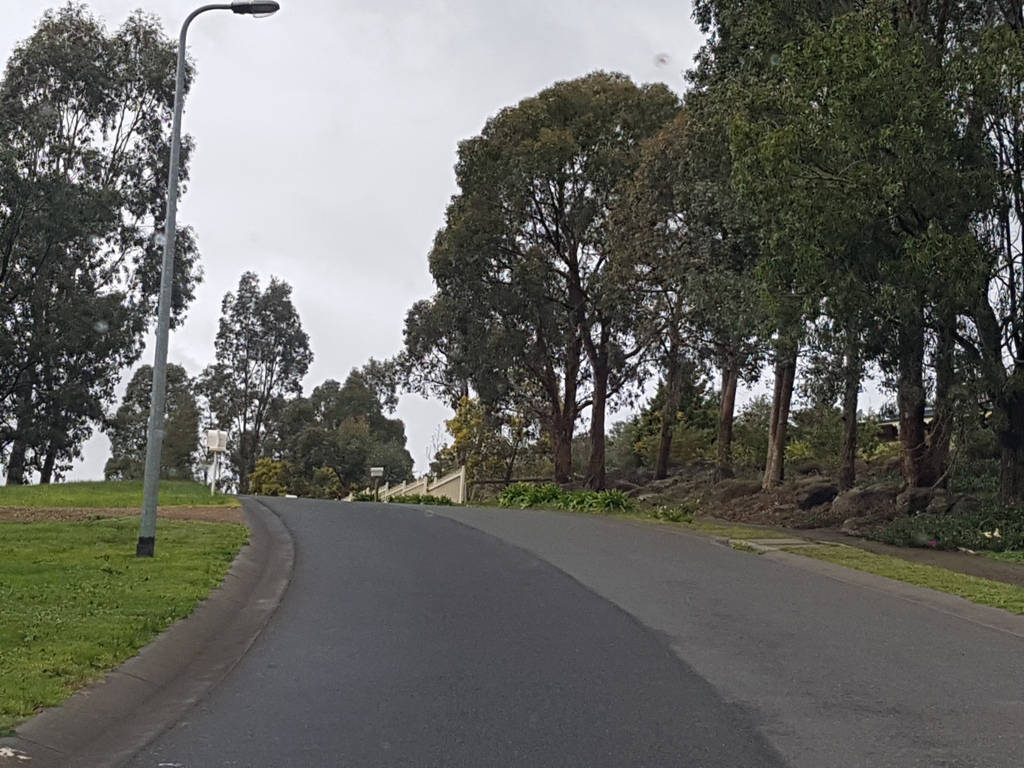 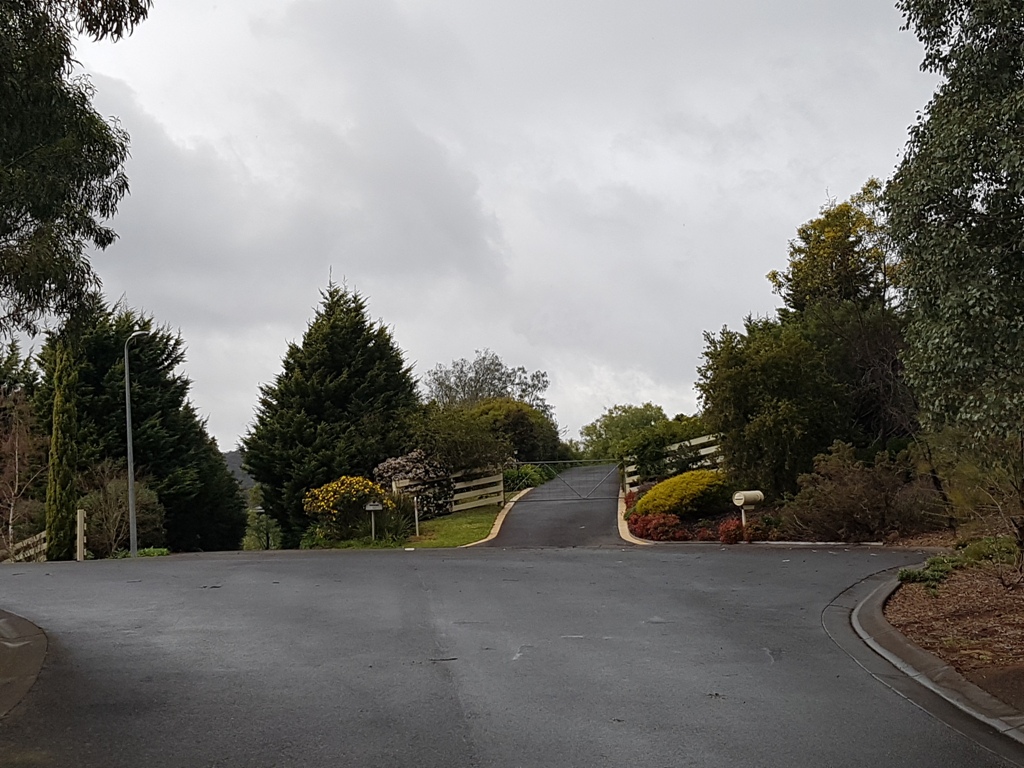 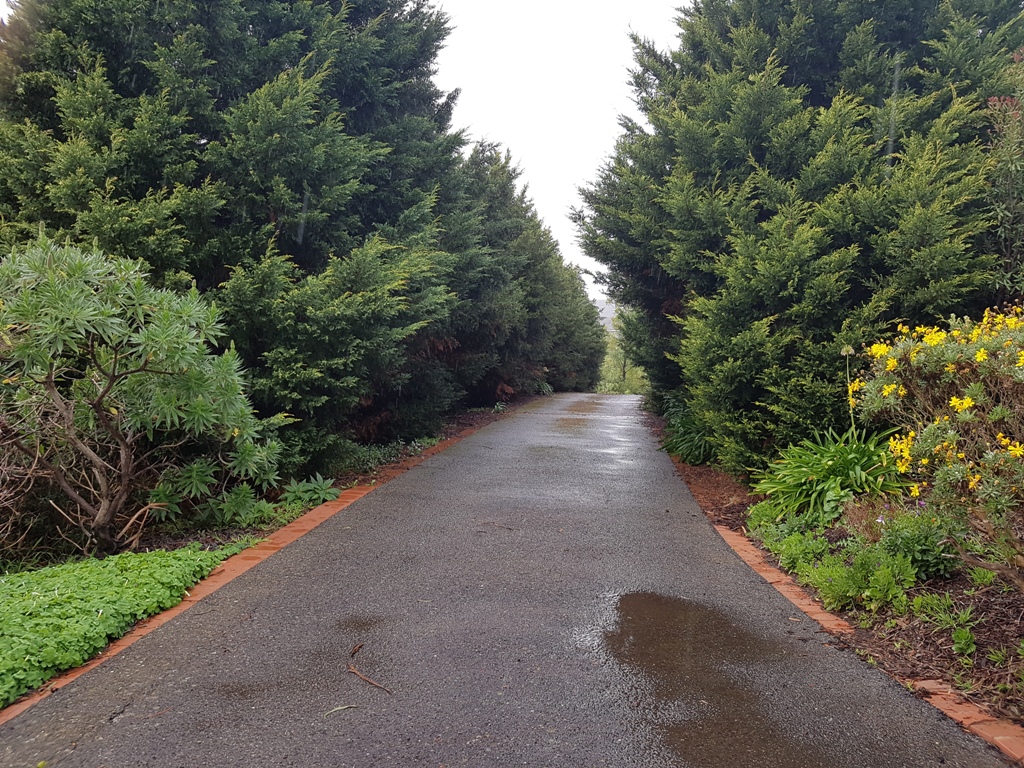 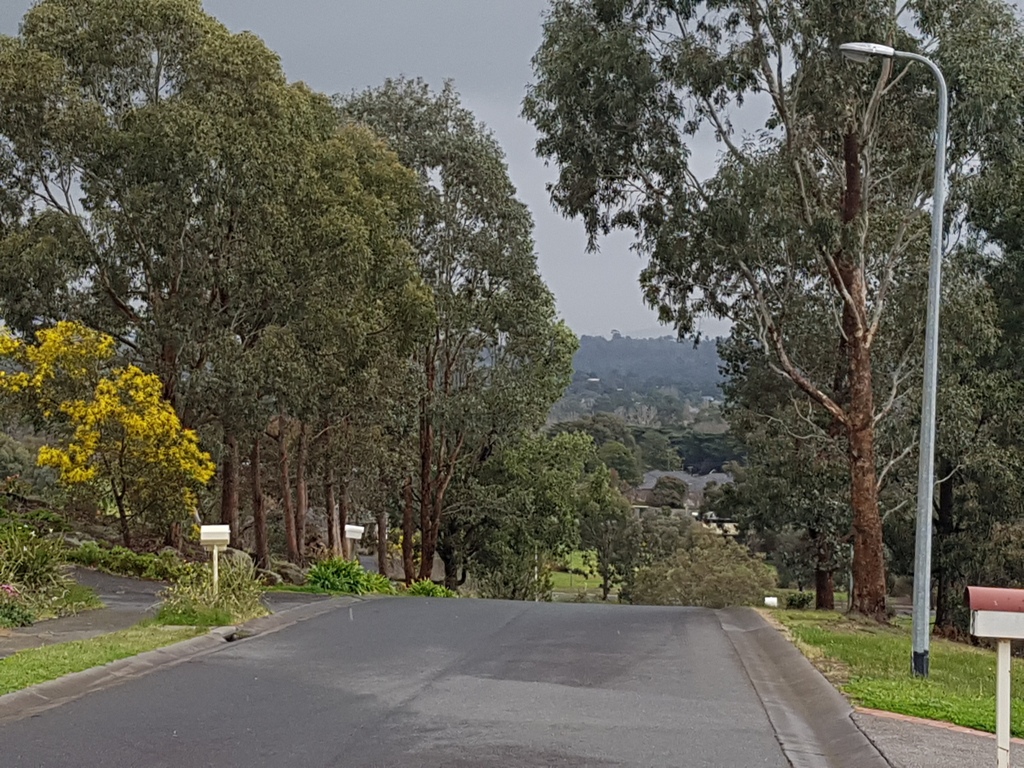 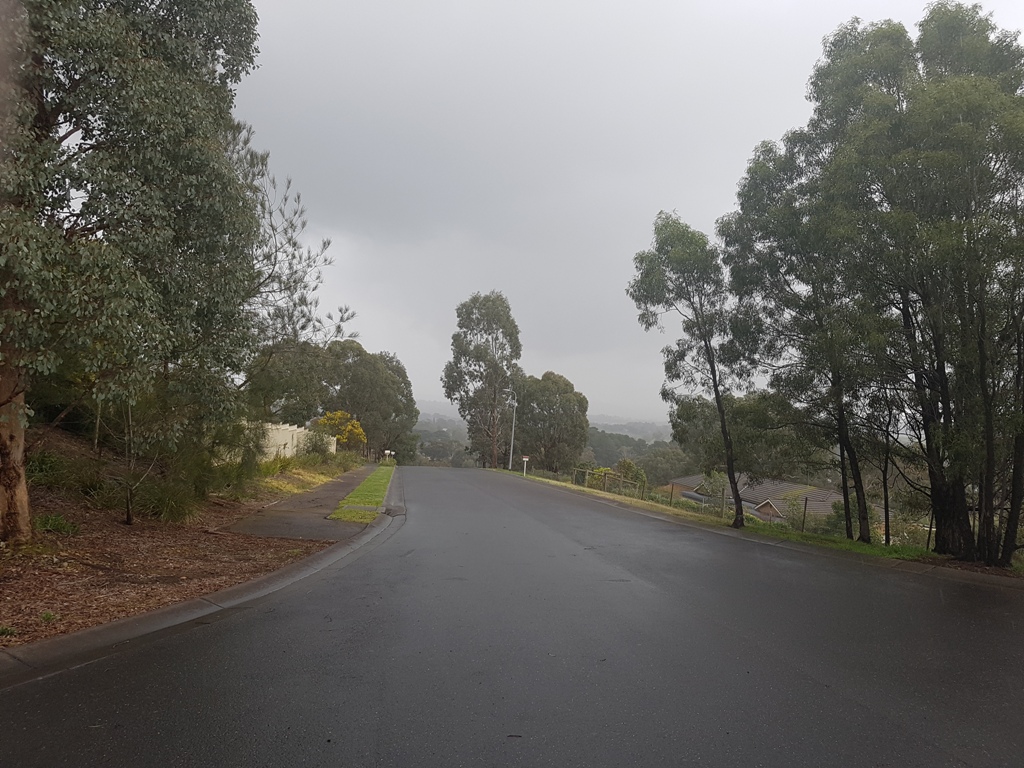 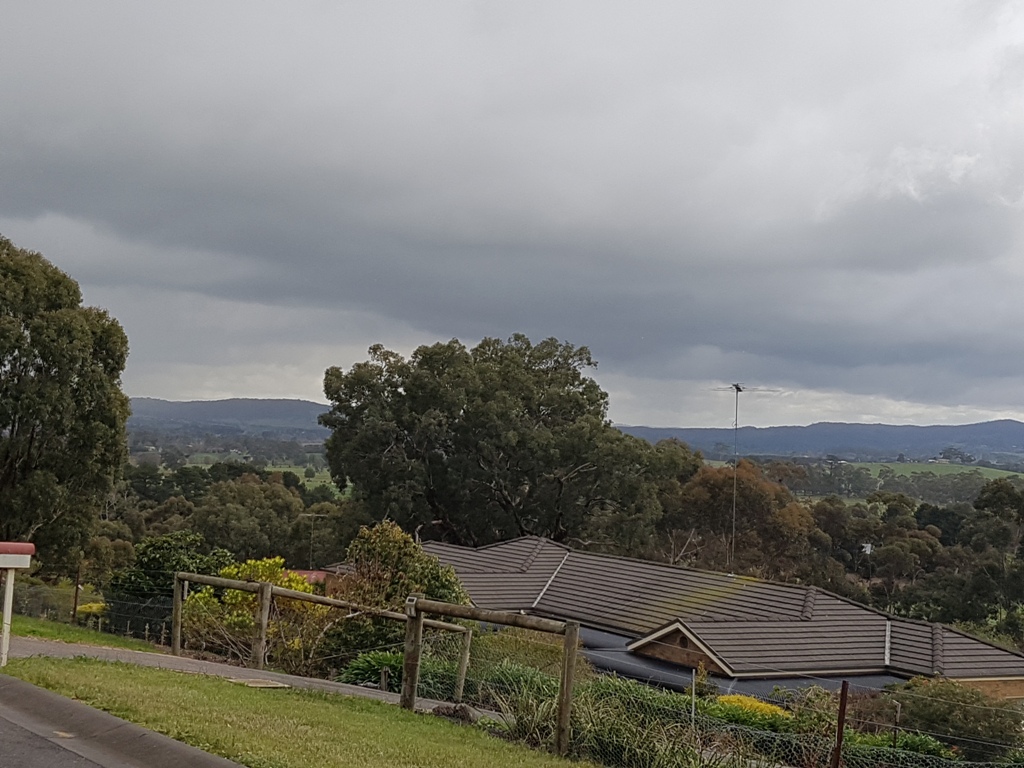 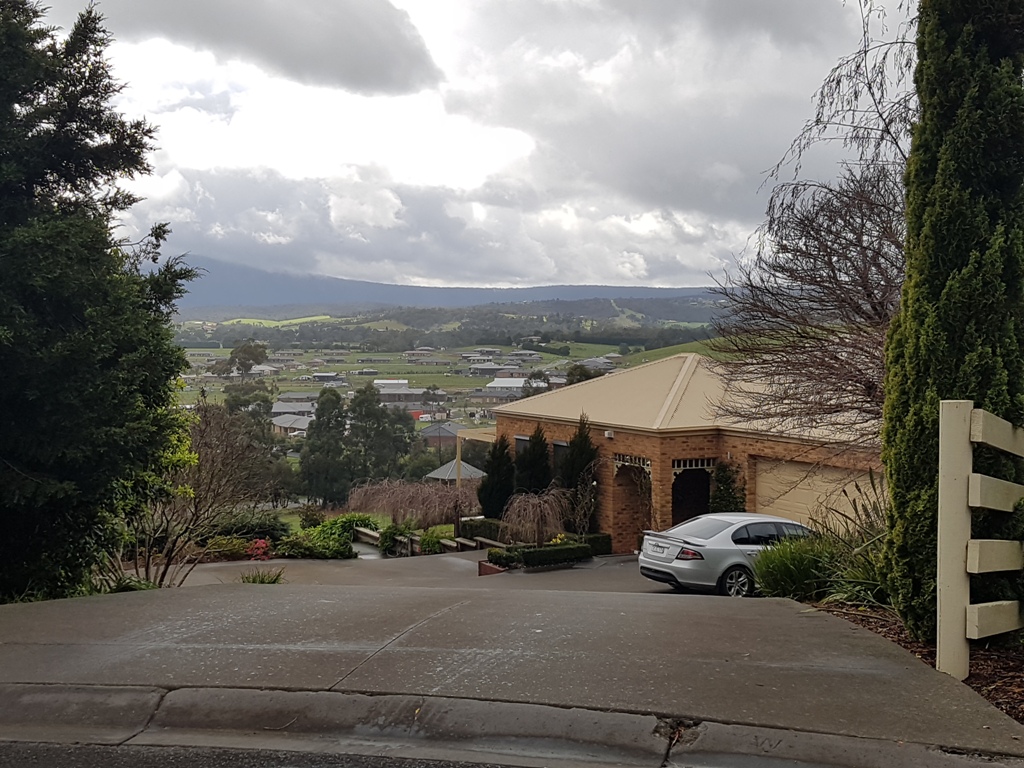 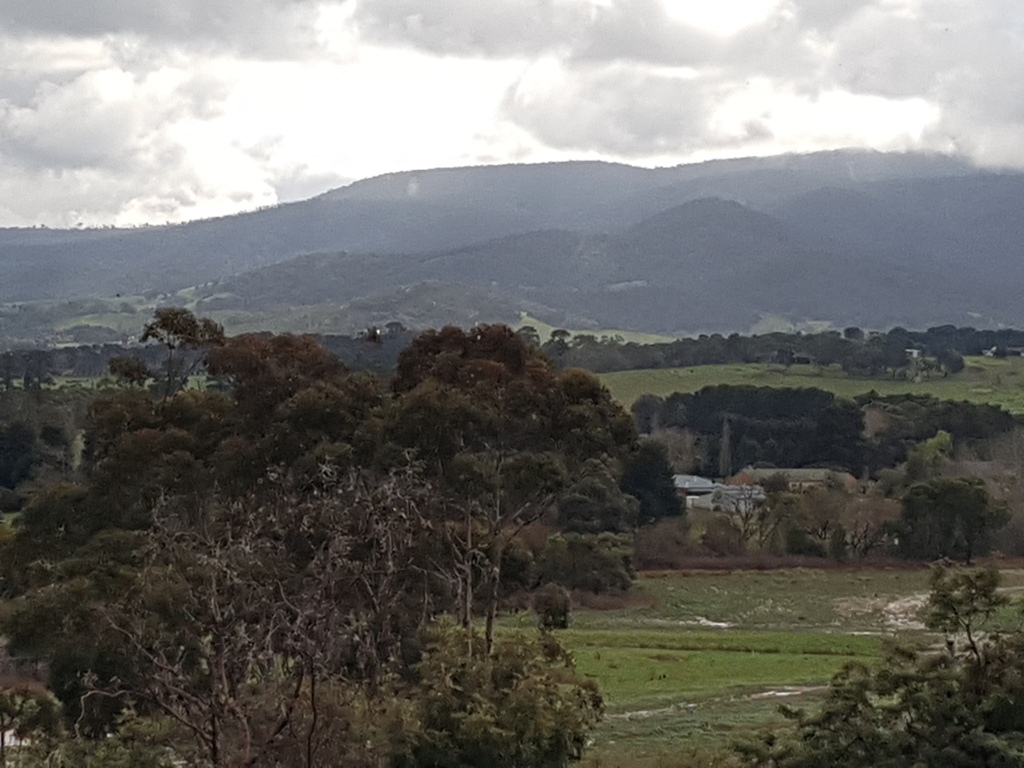 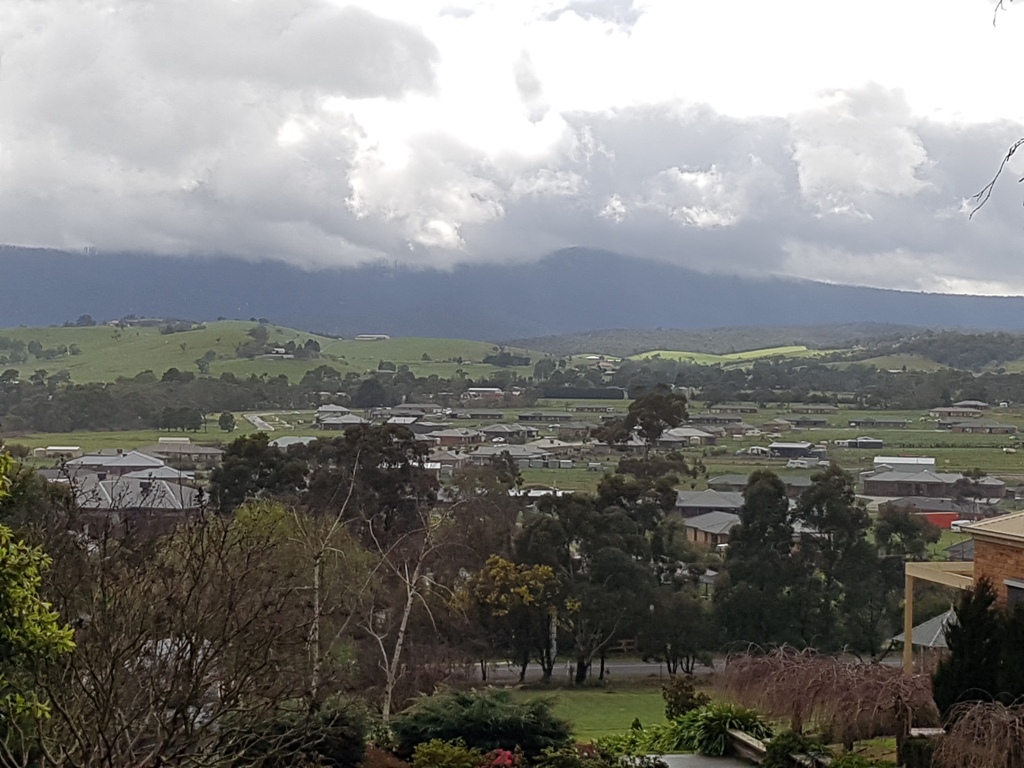 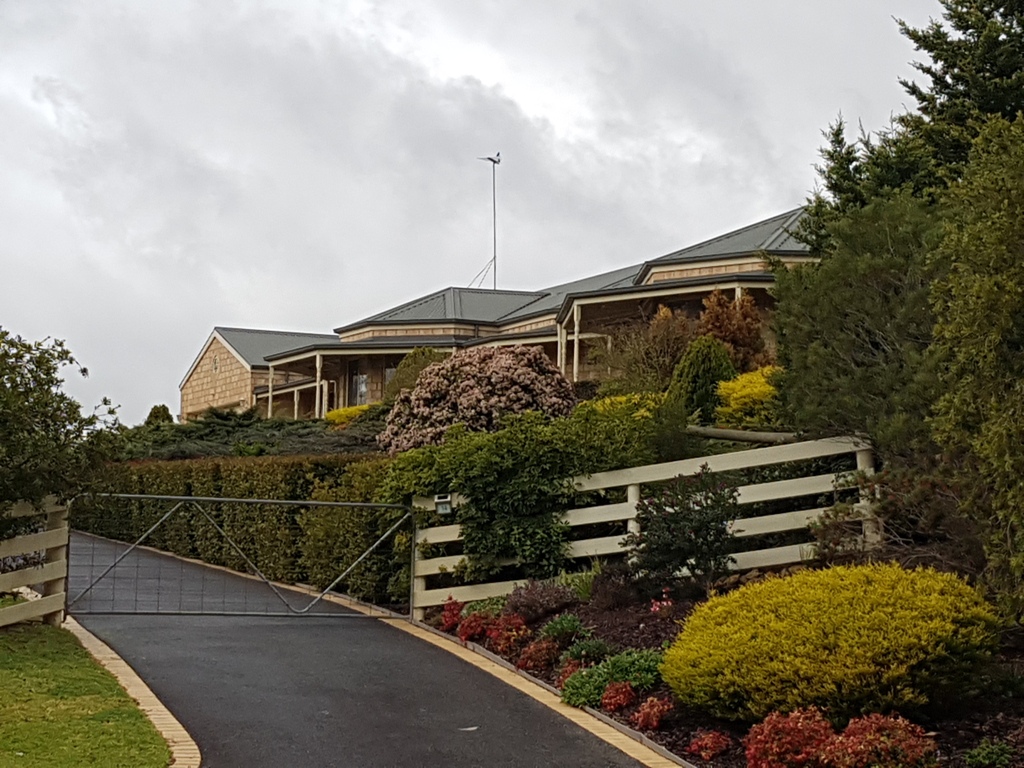 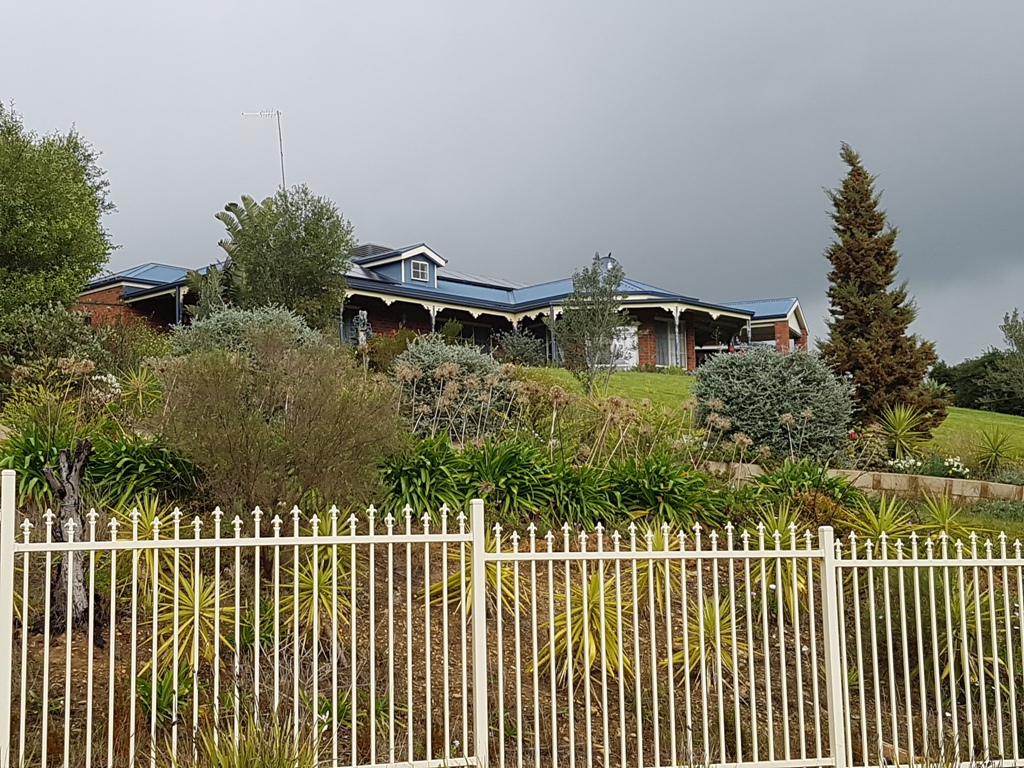 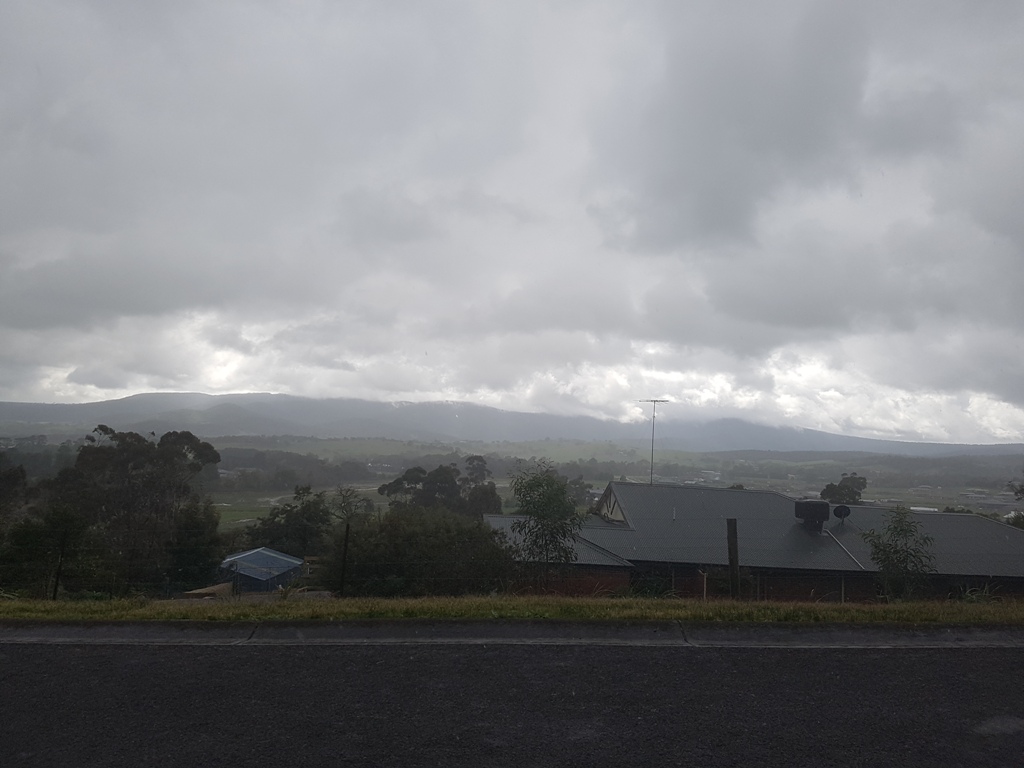 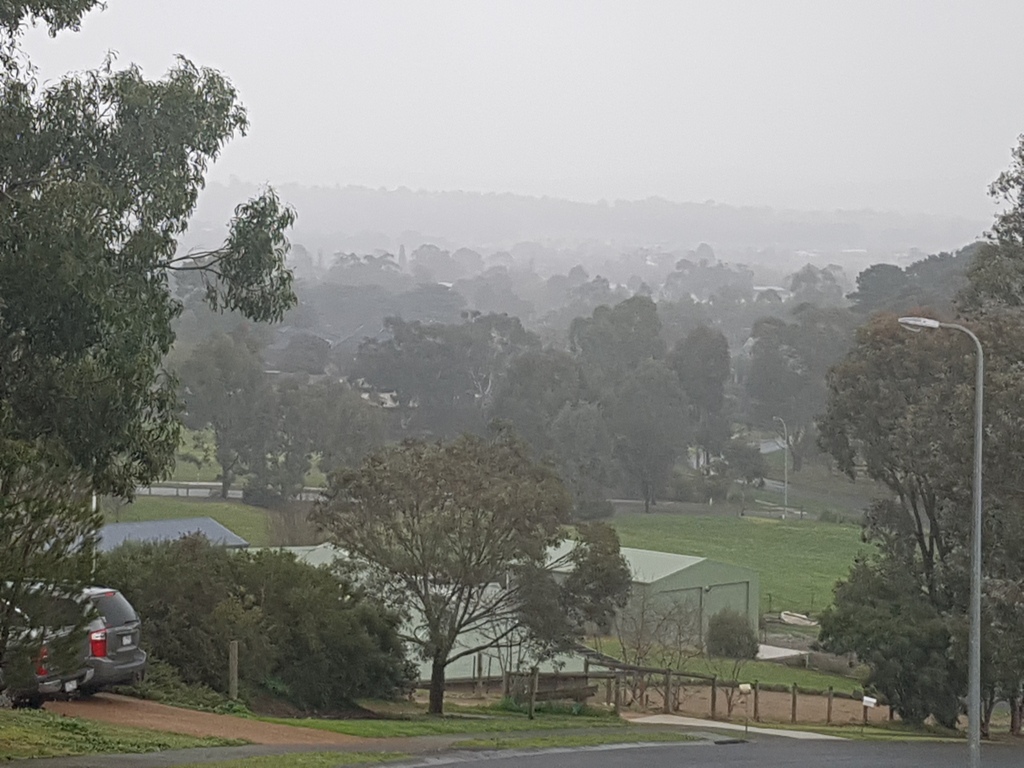 ‘Mangalore Rise’ consists of 11 houses with an area ranging from 5 to 30 acres. Normally, in a typical Aussie Street, one side of the road, the properties are named in odd numbers and the other side in even numbers. In this case, the houses were all in even numbers starting from House No 4, as Property No. 2 was an empty plot of land. Thus, the house numbers began from 4, 6, 8 and ended with 20, 22 and 24. The Council had made an exception here by naming the houses only in even numbers and omitting the odd ones for reasons best known to them. 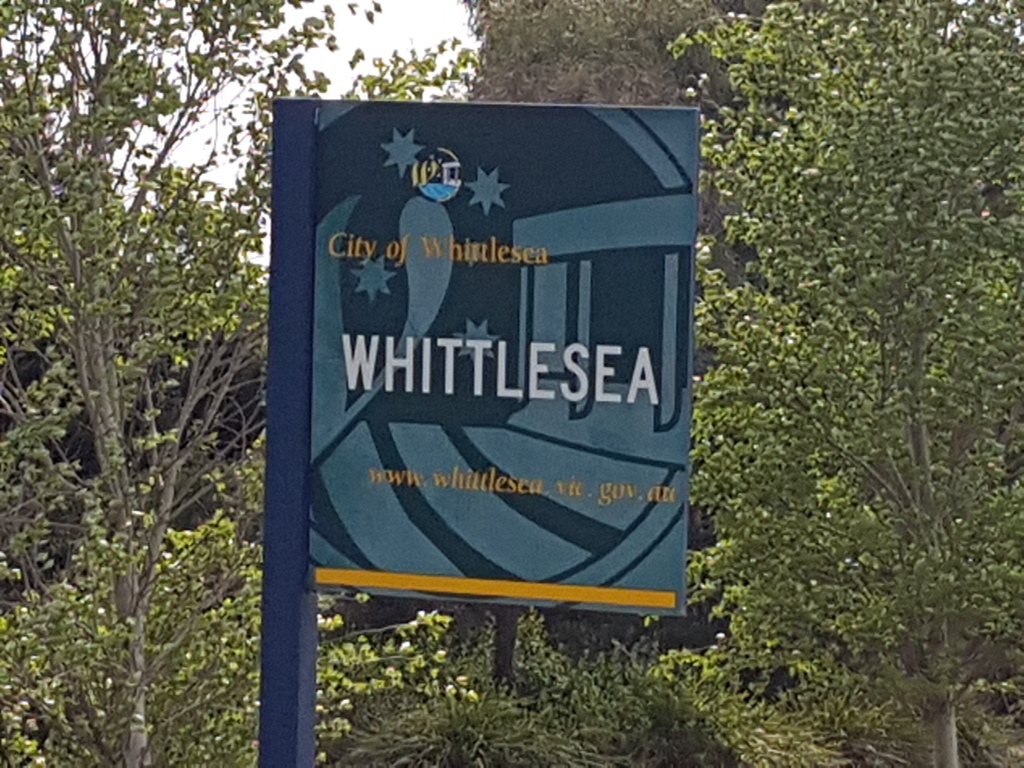 Whittlesea is the proud suburb that houses ‘Mangalore Rise,’ which is about 3 kms from Whittlesea Town Centre. Whittlesea is itself approx. 55 kms from Melbourne CBD and is only a few kms from the outer fringes of metropolitan Melbourne. The town may have been named after Whittlesey in England but it is also a well know Aussie surname. Local attractions include the Funfields Theme Park, Toorourrong Reservoir, Yan Yan Reservoir, Bear’s Castle and the Old Courthouse.

The reason why it took me almost a year to publish this piece was I was trying my best to get some sort of understanding in finding whether there was a link to the naming of ‘Mangalore Rise' vis-a-vis to the name of our Mangaluru. Not a person to give up so easily, all my efforts however, did not bear fruit as the Privacy laws here took the better of them all. I did get some leads here and there that I was pursuing till the other day, but ultimately it led to nowhere. This country is over regulated and it’s very difficult to extract information, even for a good purpose as no one wants to take a risk and find themselves on the wrong side of the law.

I did meet a couple of occupants of the houses, one elderly person reading a newspaper with his morning tea/coffee in the portico and the other who had ventured out of her gate onto the road to check her letter box. They, however had no inclination of the street’s naming and advised me to contact the Whittlesea City Council. The occupants of a car who came out from a house lowered their vehicle’s mirror to assist seeing us ‘lost’ early in the morning. When advised we were on a mission and asked about the naming query, they let us know that the elderly owners were residing in a property, pointing to an elevated house until a few years ago, but they had no idea where they had left since. 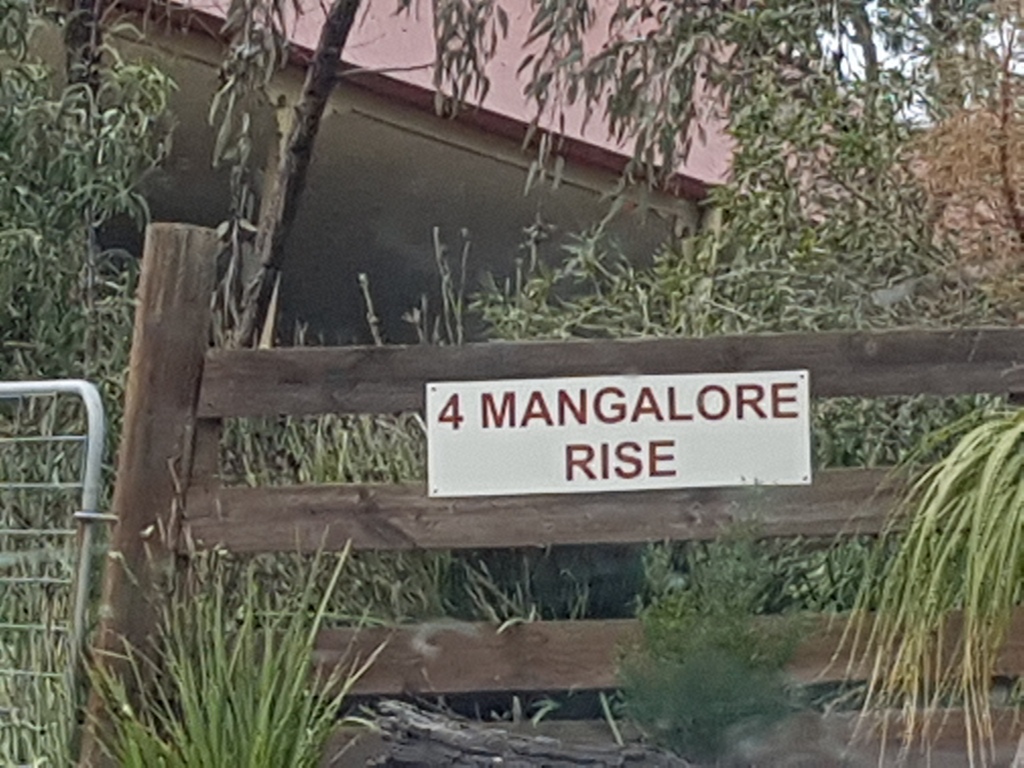 On contacting the Whittlesea City Council by email under which ‘Mangalore Rise’ falls, I did not get a reply from them for three weeks inspite of a couple of gentle reminders in between. Ultimately, upon revealing that I am a journalist (I write a ‘monthly column’, to a local Aussie publication) providing proof, the very next day, there came a reply in my email inbox with apologies for the delay in not getting back to me earlier.

Bruce Manison, team leader - Subdivisions, City of Whittlesea advised that this was a small development done by the owner in 1999 and the subdivision was certified on 27th October 1999. The owners submitted the name of ‘Mangalore’ at the time of subdivision and it was approved as it complied with the Council’s guidelines at that time. He also went on to add that at the end of the last century at the time of approval, no origin of the name was needed to be submitted - unlike now which is mandatory. On requesting whether he can provide the names of owners or their contacts, all he could provide was a map of the sub-division, which I have not published, saying the other queries he cannot answer due to privacy laws.

I discovered that the consulting land surveyors and town planners of the property in 1999 were Peyton Waite who was based in a Melbourne suburb called Preston. I contacted them on the telephone number that was printed on the map subdivision. I gathered Peter Peyton, the owner had retired and the Company relocated. The Consultants whom I spoke to over there were rather vague (again Privacy laws) and no one there could provide me with any information that I specifically desired.

It naturally drew a lot of interest as, if the landlord had to choose ‘Mangalore’ amongst heaps of Aussie, English and other names, what could have made the owner to choose this name after all? Definitely, there is something more than I can comprehend and I strongly think there is some sort of connection with Namma Kudla just like other suburbs/localities that were named after Mangaluru here. One day, someone somewhere of our future generation hopefully will come up with an answer.

The more I give up saying there are no more places called ‘Mangalore’ in the ‘Land of the Kangaroos,’ I stumble upon yet another. Since I penned my first Article in ‘Daijiworld’ narrating our experience driving to Mangalore in Victoria State on April 07, 2008 - ten years later I am still continuing to write the stories of its innumerable siblings here. ‘Mangalore of Victoria State’ that lies 84 kms north of Mangalore Rise, is a locality by itself as compared to the latter which is just a
small rising road without a thoroughfare. More recently in December last year, we had been to ‘Mangalore Drive’, a street in the suburb of Winston Hills in the Australian commercial capital Sydney which I will try to squeeze in another piece.

For now, as Aussies say a ‘Good Day’ from ‘Mangalore Rise!’ [‘Good Day’ or still shortened as G’day (pronounced as gidday) is a general greeting or a friendly welcome, used instead of “hello” or ‘hi’, both day and night]. August is the month of heavy rains in Mangaluru and we can relate it by drawing a connection when the identical repeats approx. 9200 kms away on the farthest east of the planet.

Copy the link below to the address bar and click on the arrow to scroll and embark on your journey on ‘Mangalore Rise’ wherever you are. The sun though is still alluding as it appears to be a gloomy day again when this was captured.

I had heard a lot of the glorious sunrise on ‘Mangalore Rise.’ But, it was such a disappointment that our plans went a bit awry inspite of all the right things we did. 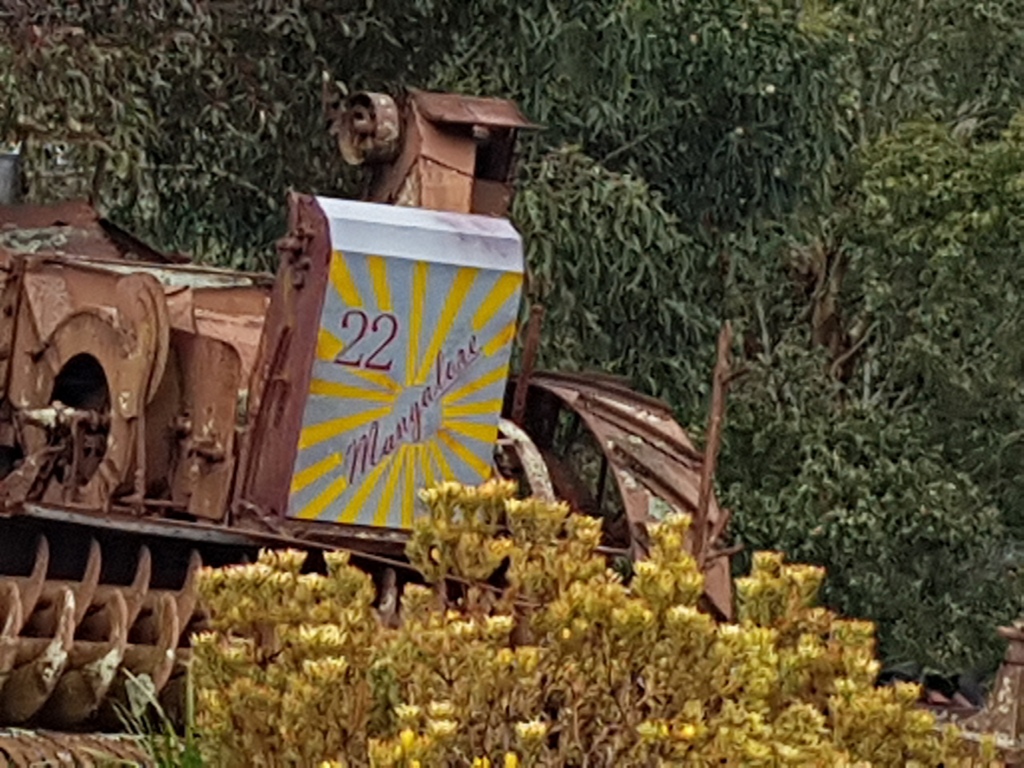 The Sun rose in front of House 22 in all splendour,
On an old rusted junk tractor of yore …
Through bright yellow rays emitting its radiance
The name ‘Mangalore’ painted across its core!