‘If you don’t want, leave it”, a mother cooed to her 7 to 8-year-old daughter, who reluctantly picked at her food at a function. No sooner had the mother uttered the words than the girl happily took her plate and dumped it in the waste plate crate, with portions of food that could easily feed a full hungry family. This is a familiar sight at Manglurean functions with their lavish expenditure and equally disgusting wastage of food. India is the land of feasts, fasts and festivals, where 943 tons of food is wasted only from marriage functions just in the city of Bengaluru. Pakistan has recently passed a law that restricts the main course to one dish at weddings. The main course may either be a bread or a rice dish.

Food wastage is a disgusting act, a social crime and a sin. To understand its gravity one must understand starvation first, which none of us will ever experience in our lives. Mere hunger doesn’t cause death, but starvation does. Starvation is a medical condition in which the body feeds on its own skin and tissues. Hunger is merely when it feeds off its reserve of stored food supply. Chronic hunger eventually leads to starvation. 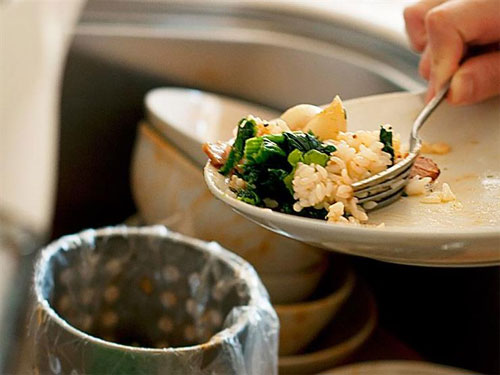 May 28 is marked as World Hunger Day, but for millions around the globe every day is hunger day. Hunger remains the No.1 cause of death in the world. Indians waste as much food as the whole of UK consumes. According to the Agriculture Ministry food worth Rs. 50,000 crore is wasted in India annually. India ranks 63 among 88 countries in the Global Hunger Index. The number of hungry people in India has increased to 65 million more than the population of France. Over 7,000 Indians die of hunger every day. Over 20 crore Indians sleep hungry each night. Over 25 lac Indians die of hunger every year. There are 82 crore chronically hungry people in the world, not because of food shortage but due to unavailability of food to everyone consistently. All this is never mentioned in election speeches nor is Indian budget designed to eradicate hunger, with the least spending on public health among the countries of the world. A sad reason could be that these people do not form a vote bank. Millions of tons of grains, cereals, pulses, fruits, and vegetables are wasted due to pre and post-harvest problems instead of reaching the needy. The government takes adequate steps but the impact of the efforts is hardly up to the mark.

Jesus fed 5,000 people out of 5 loaves of bread and 2 fish. But at the end, the Bible tells us that He asked the disciples to gather the leftovers. ‘When they were satisfied He told his disciples, “Gather up the fragments left over, so that nothing may be lost” (John 6:12)’. So if the Son of God did so much as bother to gather the leftovers so that nothing is lost or wasted, it must be a sin for us to throw away our food as easily as we do.

At functions, always ask children if they want a particular dish. It is easier for the parents to help them in serving dishes onto their plates. Instead, serving all the dishes onto the plate in adult size portions and then leaving it is not a good practice. Once served, ask the children to finish all the food. Even adults leave food in their plates so often, setting a bad example for kids. Every 10 seconds a child dies of hunger. One needs to understand how it feels like to have an empty plate when one’s stomach is empty. For the sake of all the hungry people around the world, it is our responsibility to see that our plates are empty. At home, buy and cook realistic portions, so no leftovers are thrown away. Re-use leftover food for next meal. Re-route excess food to the needy. Even if food gets spoilt, compost it. If one hosts a function, one must plan for the leftover food.

22-year-old Padmanabhan Gopalan from Chennai runs No Food Wastage NGO, whose dream is when he can close his NGO due to no food wastage. Robin Hood Army NGO too does similar work. One may call the child helpline 1098 to help transport food to the necessary places. In Mangaluru, Computer Zone cyber café at Jyothi circle, Balmatta keeps free food for the poor in a fridge. Similar fridges exist in Trivandrum as well as Kochi. White Doves Trust supplies free food packets for the poor on a daily basis. If we cannot help these Good Samaritans in their noble endeavours, we can do our bit by at least not wasting the food that we are blessed with by God’s bounty. A Chilean poet, Pablo Neruda, Nobel Prize winner said, ‘For now I ask no more than the justice of eating.’ “If you don’t want, leave” I told my 3-year-old who happily dumped tidbits from his plate onto my plate. Now you know the secret to my good health!