'Man kills friend, takes selfie and posts on Whatsapp', said the headline on my phone as I read an account of how a 27-year-old killed his married lady friend, with wide eyes. I found not a single thing inspiring from the news item, yet it got me thinking as to where was humanity heading. Where has the love gone from humans? We’re heading into an abyss, and taking selfies along the way!

Today of course love has taken over a new meaning. Love is shown in the photos we post, in the mushy statuses we update, on Valentine's Day, between members of the same sex, between man and animals, towards trees… everything becomes love, and is vigorously justified. But as we are in the season of Lent, this write-up is to show a much greater love than all of this. The real love - the reason for our existence. I am talking about the historic man of love - Jesus Christ.

What has love got to do with Lent, one may ask. Everything. Why else would God become man, live and work, just to die miserably at the end? For an ungrateful mankind who is as pagan as they were before the coming of Christ. The answer lies in John 3:16 - For God so loved the world that He gave up His only Son so that whosoever believes in Him may not perish but have eternal life. Why does He need to love us so much? Simple. God is love. He cannot but love. He cannot but bless. He cannot but forgive. He simply doesn’t know anything else. How lucky! We humans on the other hand know anything but love. That’s where the Lenten season comes in. To usher in a gentle yet powerful breeze of love. This is the season of abstinence. Some give up meat, some liquor and other things. 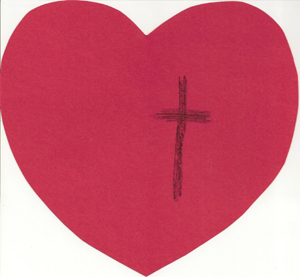 I know a friend who doesn’t watch movies in Lent. It’s a different thing she watches them all on Easter Sunday and the next few days together! Maybe we humans are capable of only so much love. We wouldn’t die for each other. Yet humanity is not entirely devoid of emotion. Even today we hear accounts of mothers dying for their children, patriots dying for their country, lovers dying for each other (sometimes rather foolishly I must say!) St Valentine died for the cause of love, Jack in Titanic died for his love, Neerja Bhanot died protecting three little children during the infamous hijack in 1986. Even today if someone were to pose a threat to our loved ones, we wouldn’t bat an eyelid to take a bullet for them. But would we die for someone who has yet to be born? For someone who doesn’t even know us? For someone who would deny us? Would we plan it for centuries? Would we give up our existence, take a form entirely different and far more inferior and live 33 years just to die for that person? Sounds crazy, doesn’t it? Yet that’s exactly what God did for us. He planned to die for us the day Adam and Eve sinned, He put His plan into action centuries later through Mary, prayed 40 days for the strength and then died the most painful death. And we reward those 40 days of His Passion with abstinence from meat, liquor and movies. Not that it’s wrong. Abstinence is also out of love.

Lent is far more than that. It’s a tenth of a year, like a tithe of our time to God. Lent is to give Him more of our time. Let’s love more, pray more and try to be more like Christ who died for us. Nothing can surpass His love, but we can try to love one another just like He did. Let’s give Him more importance than anything or anyone else. Like take on an electronic fast-keep our cellphones aside, give up Facebook, Twitter, WhatsApp etc (as painful as the crowning of thorns?!), then give that time for prayer or just to be in His presence. Instead of listening to worldly useless music, let’s listen to hymns and praise and worship songs; instead of daily soaps and movies, let's watch devotional programmes. Let’s spend less time over the internet and use that time to talk to our siblings or grandparents at home. Let’s be patient towards others, wait a minute for the pedestrians trying to cross the road, be kind to the beggar who begs, or the eunuch who bugs us at traffic signals, smile at the lady who throws trash in our compound, bite our tongue when we want to say something spiteful or back answer our parents, talk a little less over the phone, gossip none at all, obsess a little less over ourselves, spend a little less on material goods and donate it, do anything that shows and portrays love. Not for the sake of showing love. But to love in return for the love we were shown. Millenia ago. And then once we see the blessings that pour in and the goodness we feel, let’s continue it after Lent. After all, Christ didn’t take a holiday after He rose on Easter Sunday to make up for all the suffering He went through. He is the same yesterday, today and forever (Hebrews 13:8).

Meanwhile in our sad virtual world, a quote on FB - 'If you’re single on Valentine’s Day, remember nobody loves you on the other days of the year as well!' Talk about sad. But you and me know better, don’t we?