Memories of a Rainy Day

As I was looking out of the window, from my second floor apartment, a sight brought a very strange memory: memory that ached my heart - yes my heart! This usually never happens: the last time I had heartache was years ago, when Katrina Kaif agreed to become Salman’s girlfriend. Well, the memories came gushing from somewhere deep within my subconscious mind. The trigger to this gush of past memories was a leaf flying in midair, along with some unwanted plastic bags, which I pretended to ignore. This sight transported me back to a time, when life was simpler, peaceful and to the say the least natural.

About a decade ago, I used to enjoy the same sight from my home. With my feet up on the railings, I could see yellow withered leaves, unable to withstand the fury of rain god, wanting to meet earth, but not let by strong winds. So amazing was this feeling, when the mind just enjoyed the moment, without dwelling in the past and neither planning for the future. Our thoughts were just as pure as those shiny water droplets falling from heaven. 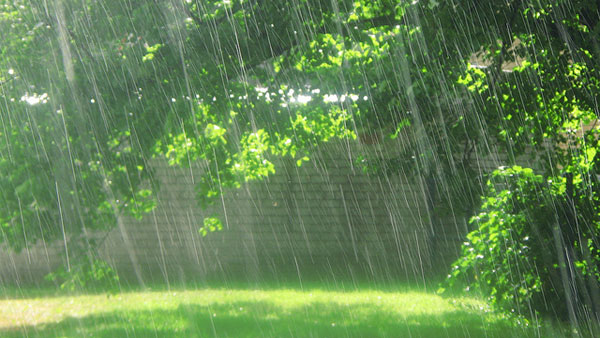 Rainy season used to be the most sought after season back then. It was like homecoming for almost everyone. After the sweltering heat of April and May, onset of rains was a warmly welcomed. I remember mummy readying the thick blankets, but putting them out in the sun, late in May, anticipating rains to pour down any moment and boy, didn’t it pour? Heavens opened up in the month of June and shut only late in September. Fans were unused during this season and so were socks. As young children, we expected at least 4 holidays, where we would go to school and then come back home in half hour. The joy when the school attender came to the class with a notice was out of the world. No amount of vacations to exotic locations can bring this joy back. All carpets and cloth mats at home were neatly packed and well rested, giving way to plastic mats at the entrances of the house. Big green and red buckets were kept under the pipes which let out water accumulated on the roof - our ingenious way of rain water harvesting. The court yard or what we call aangan of the house was lined with coconut palms or sprinkled with a mixture of limestone powder and sand. Old umbrellas were pulled out of their graves, dusted and mended.

Preparations for rains began much earlier, during summer vacations. Mai used to gather all her grandchildren and put them on duty of making papads for the rainy day. Papads of all kinds - salted, spiced, peppered and many kinds. This task was like Henry Fords well-oiled assembly line. Everyone was assigned a particular task and gradually we got good at what we were supposed to do. Aunts were in charge of rolling the papad’s, while some older cousins were also promoted to rolling, depending on their pestering. Mai used to supervise dough preparation, check salt, spices and consistency. Some strong cousins were then tasked to knead the dough; some others were assigned to cut the dough into pieces for the little cousins to convert them into balls. Then the rolling began. Papad’s came out of this section in ten’s and gradually in hundreds. Most laziest and useless ones were tasked to put the papad’s out in the sun and back. I was in this category almost every year. The pile of papad’s at the end of the day was a sight. Similarly coconuts were dried and sent to the oil mill. Mango pickles were made at home and forced inside the buyaanv. Onions, garlic and some other vegetables were hung inside the modhlein (middle) kood. Every house had a modhlein kood. My dad was saying that earlier, pork was salted, sun dried and hung as well. Wow, bacon on the house, literally. Late in May, my sister and I, along with mummy used to make a trip to Udupi for books and bags. We were excited about the kind of labels we were going to buy. My sister used to always pick up those girly ones, and I used to pick up strong WWE labels. The excitement of binding books was short-lived when the thought of going to school entered the head. Sitting on freshly bound books to set them right and waiting for the dreaded 1st of June was never a good feeling, but the scent of the first rains meeting the dry earth erased all bad thoughts about school- anyways 1st of June was always half day.

Well, all memories gushed out of the back of my brain on this hot rainy day - yes hot rainy day. I was disappointed at our plight. What have we done so wrong that it feels like summer in the middle of the rainy season? There is this strange feeling one gets- a feeling when dark clouds gather in the sky early in the morning, as you pack your bags for school, knowing well that this day is going to be a holiday. But then, just as you leave the house, wind pushes these dark clouds and makes way for the sun. This is happening very often in the recent past. Rains, during the rainy season have become a rarity. I think our next generations are going to pay for all the atrocities we have done with the mother earth. I recently saw one of the most beautiful adverts on the internet- the one which says mother earth doesn’t need us, whereas we need her.

Well, it was time for me to get ready for work and get busy with the mundane things in life. As I entered the metro for my commute to office, the rhyme ‘Rain Rain go away, come again another day, Little Johnny wants to play’ was ringing in my ears. I had a faint smile on my lips- Little Johnny was indeed lucky to have got to see so much rain.

Title: Memories of a Rainy Day