The room was dark except for the lone lamp that shone mildly over the desk on which sat a notebook, whose pages ruffled with the slow wind blowing through the open window.

An old man sat before the desk and looked with distant eyes at the flipping pages and sighed deeply.
In his wrinkled hand he held a fountain pen, with its top in place, and twirled it unconsciously, as he had been doing all his life.

His spectacles sat at the rim of his bent nose and its thread hung around his neck, limply.

He wore a white kurtha and pyjama, which had seen better days. 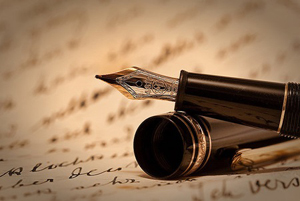 This was how it was when he sat to write, when a distant memory revived in his mind and remained for as long as it took him to record it in his diary. Each such memory, each entry in his notebook, was a part of him that, after the moment had passed, he no longer remembered, could no longer relate to. He would then read his diary, as if it were the first time, and would dwell on those words, on those instances, that were written in his own handwriting, which he didn't recognize either, and made him wonder, whose story it was.

He would thus remember his past in the present only to forget it in the future. As a result, his present never existed nor was his future ever born. His past was all there was; of which, he at times, remembered only fragments.

And now, as he sat before the desk, with the pen in hand, he remembered another detail of his past. An instance he wished to capture; to fossilize.

He unscrewed the pen top, nudged the spectacle up the incline of his nose, leaned forward, rested his left hand on the desk and began to write,

The gang that had infiltrated our village on horseback had galloped the streets with swords and fire torches in hand for three nights straight and on the fourth night, they set fire to our neighbour's house.

The blaze was blinding. Shouts and cries and hysterical ramblings followed. It was indeed very unpleasant and deeply unsettling.

Father, had rushed us into the attic room and had locked us in there. Mother soothed us, me and my sister, as we cried uncontrollably against her. She tried to keep her voice calm, as she hushed us, yet the fear that she tried to mask was unmistakable.

We heard a glass shatter downstairs and I was certain that one of our coloured glass windows had been stoned.

Mother pulled us closer and passed her hand over our heads, as she recited a familiar prayer, over and over again, urgently, fearfully.

A man shouted angrily outside our front door and soon was joined by many others and the cacophony rose to the sky. They were pounding insistently, throwing themselves against the door, trying to burst it open.

We heard the door giveaway and several feet scrambled on the matted floor downstairs. Screams of anger and hatred resonated throughout the house. Hasty footsteps sounded on the stairs leading to the room we were hiding in; that was guarded by my father from the outside.

The floor beneath our feet reverberated, as they stepped onto the landing.

Father, screamed with such intense rage that it sent chills down my spine.

Mother, snivelled and then wailed.

And so did we.

The sound of metal against metal rang through our ears.

I dislodged myself from my mother's grip and ran to the locked door; pounding it with all might.

Mother pulled me away from the door and locked it from the inside.

With tears running down her face, she dragged me and my sister to one corner of the room, close to a window.

She bent down on her knees, so that she was on level with us both and spoke thorough sobs and sniffs; hastily,

''Both of you must leave, now. If you stay any longer then they'll kill you. And I can't let that happen.''

She was now shaking uncontrollably and her words were muddled.

''Amar,'' she looked at me, staring with those glistening eyes of hers, that shone in the light of the flame outside and continued,

''Take your sister along and run away from the village, in the direction of Ganjh, you'll find help there. Go to Kehari Chachi's house, she'll take care of you.''

Somehow, I knew she was lying.

Leher, my sister, screamed too.

''Sh...'' my mother pressed her palm against my mouth and shook her head.

Several hands pounded against the door and a few bodies slammed against it.

Mother threw open the window and kissed us on our forehead.

She lifted my sister and hurled her out of the window and before I could realise what had just happened, she lifted my twelve year old self off the floor and heaved me out into the night.

But before I plunged down the two stories of our house and landed beside my eight year old sister, on a large bed of hay that was stacked right under the attic window, the door had burst open and I caught sight of my father being stabbed by two men, his kurtha stained with blood.

The sight would haunt me in my dreams for a very long time. 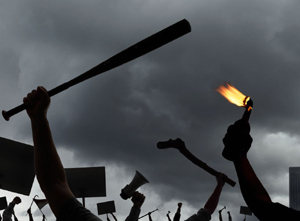 We slid down the haystack and looked back up at the attic window and found my mother's tear stained face looking down at us with infinite sadness and just when she was about to say something, she was yanked away from the window, as someone pulled her by the hair, and into the room.

That was the last I saw of my Mother. And Father too.

Leher gripped me firmly by the waist, her head resting just below my chest.

Her wailing was lost in yowling all around us.

The night was ablaze and commotion ruled the streets.

We were in the midst of a great frenzy.

We were in the midst of impending death.

I held my little sister's hand, firmly, and dashed thorough the crowded streets.

My eyes were blurred by the flow of incessant tears and my heart ached at the prospect of leaving my parents behind; never to see them again. A part of me yearned to run back to them, to save them, or more likely, to die with them. But running back would mean risking Leher's life and I couldn't afford that.

I tightened my grip on Leher's hand and we kept running.

It didn't take them much time to spot the two children running in the direction opposite to the village and when they did spot us, they came for us.

In their hands they held fire torches whose flames wavered as they narrowed the distance between them and us, at a pace much faster than I had anticipated.

After we had covered a considerable distance away from the village, I felt Leher slowing down behind me and heard her gasp,

We had by then reached the outer vicinity of our village and the sound of the flow of River Amrapani filled our ears.

Leher's grip slipped from mine and she collapsed to the ground.

I staggered, stopping a few paces ahead of her and then ran back to her and knelt beside her.

The torches were approaching and the hollering of the two men who were following us now grew considerably louder.

Leher was panting deeply, her chest rising and falling visibly with every breath. I could almost hear the thudding of her heart.

She tried to speak yet her words never left her lips. Her eyes drooped, she was losing consciousness.

I pressed my thumb against the underside of her wrist and felt for her pulse.

A new wave of fear and sorrow swept through me and tears rolled down my cheeks.

I patted her cheeks, while calling out her name repeatedly, crying out to her. Yet she remained unresponsive.

I lifted her head off the ground and placed it gently on my thighs.

It was then that I saw the poisoned dart lying on the ground. Its tip stained with blood. Leher's blood.

The sound of approaching feet drifted through the silent night and the glow of the torches illumined the faces of our executioners.

A sly smile had crossed their lips; a look of triumph had been etched on their faces. And as they approached us, they slowed their pace.

I looked away from their faces and down at Leher.

Her face was bereft of any expression. Her eyes were partly open. Her lips were still.

I lowered her to the ground.

I passed my hand over her eyes.

The old man placed the pen down and removing his spectacles, wiped the tears from his eyes.

He leaned back on his chair and sighed deeply.

The old clock downstairs rang thrice and slowly its sound died out.

He screwed the pen top back in place and resting it between the pages where he had stopped, he closed the diary shut.

Wearily he got out of his chair and walked to his bedroom.

The next day, of course, he remembered nothing.

By Agothe Smyth
Agothe (eh-goh-th) Smyth is a pen name assumed by a voracious reader and bibliophile based in Mangaluru, whose favourite hangout spots include libraries and bookshops. Having read a whole lot of books, he decided on writing his own stories, which can be witnessed at his blog: Sea of Musings. He divides his time between the fictional and the real world, while still retaining his sanity and sobriety. He can be followed on Facebook/Twitter and can be contacted at agothesmyth@gmail.com.
To submit your article / poem / short story to Daijiworld, please email it to news@daijiworld.com mentioning 'Article/poem submission for daijiworld' in the subject line. Please note the following: