That Night When I Woke Up Dead

Sleep those little slices of death;
Oh, how I loathe them!

That night, of which I write, whose recollections still fill me with the greatest dread, I had retired to bed a little while earlier than I usually do, for a splitting headache had left me with no other go. If I had not rested, it'd have only got worse. And hence, after having a quick bath, the warmed leftover of the previous night for dinner and a glass of orange juice to gulp down an Aspirin tablet with, I switched off the lights and was asleep even before I hit the pillow.

I remember my ex-girlfriend complaining, back in the days when we were together, that I always slept like a log and not even an earthquake could rouse me out of my beauty sleep. Having had no smart retort at my disposal, during one such episode of accusations centred on me, I smiled guiltily and ruffled my silky hair, like a kid caught red-handed stealing cookies from a cookie jar. Should she have witnessed how swift my transition from a deep sleep to wakefulness had been on that fateful night, of which I speak, when I sensed a shallow breathing near me, in a room I was the lone occupant of; she'd indeed have been perplexed.

That night I woke up with a start. Well, at least I thought I woke up. To my great consternation, I realised, that my hands and legs were stiff. So was my entire body; with the sole exception of my eyes.

I was conscious yet immobile.

As the gravity of my situation dawned on me, I felt the beginnings of fear creep through my entire being.

The pounding of my heart was loud in my ears. I felt the throbbing of a vein on my left temple.

Or at least I thought did.

What I had intended to be a loud, appalling cry of fright came out sounding anything butthat.

I could only groan and croak.

It was then that I heard a shallow breathing not very far from my bed.

I stopped groaning, at once. And I listened.

It was deep and slow. In the dead silence of my bedroom it sounded as loud as a whisper. Low pitched yet barely audible.

And then, I knew; there was someone in my room!

The fear I felt then, as I lay immobile on my bed, was unlike any I had ever felt before. The cognizance of being in such a state of stillness, in the presence of something or someone you can't see but know is near you, is truly and remarkably horrifying.

Instead, I whined and moaned, helplessly.

The effort drained me. 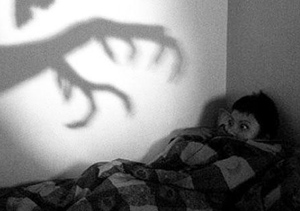 My eyes, danced frantically, trying to catch sight of what or who was near me but in the moonlight that filtered through the glass panelled balcony door, curtained almost halfway through, all I could see was the ceiling and the fan overhead, and also a little of what was to my right, while to my left, there was only darkness.

A minute passed before the sound of breathing was accompanied by footsteps, damp soggy footsteps, slow and deliberate, moving towards me, closing in.

My heart was pounding feverishly. My breath came out in gasps and all my efforts to shout and scream ended up being nothing more than guttural noises. A warm stream of tears flowed down my face. I wheezed and sobbed. I was having trouble breathing.

The footsteps now seemed to be only inches away from where I lay motionless and sick with fright. From the corner of my left eye, I could barely discern a shape, that resembled not a man but, to my greatest horror, a hideous beast!

The mere sight of it sent chills down my spine and my eyes bulged in sheer terror.

It was tall and scrawny. Its arms were long and at the very end of it, what could only be its nails, were thin and curled, in the form of a large C. Its legs, on the contrary, were short, while its feet were concealed in darkness. Its face seemed plump, its features however were hidden. And all along its hideous frame were short lengths of thick tendril like structures that quivered; like tentacles!

I breathed deeply, eyes straining, and whines of fright emanating deep within my throat.

And just then it began to walk away from me. The sounds of its footsteps and its breathing receding.

After only a few seconds, the sounds ceased to be.

For a moment I was relieved, although not entirely. I could no longer see the figure, for it was now totally engulfed in the darkness.

But I was wrong.

The sounds resumed once more. The footsteps however seemed more strained and deliberate. As if—

And then I realised.

The creature was crawling up the wall right opposite to the foot of my bed!

Panic gripped my senses yet again and my heart felt as if it would burst right throughmy chest. My head felt as if it was being pounded with dozens of hammers, repeatedly. Tears flowed and gasps escaped my throat, as the creature advanced, one soggy step at a time.

I strained my eyes to the far end of the ceiling above me and kept it trained there, expecting the creature to appear, to see it crawl forward, to see it come for me.

Its curved nails dug into the thick concrete of the ceiling, as if it was made of clay, and like a mountaineer, it proceeded forward. Its webbed feet moved seamlessly on the surface, without any mighty effort from its side. The tentacles curled and uncurled, menacingly.

My eyes no longer were frantic nor were they focused. They just were. Staring yet not seeing. Gazing yet not realizing.

It was not until the creature was right above my sleeping figure, suspended from the fan, swaying slightly, to and fro, that I was aware of its presence once more.

As my senses registered the close presence of the creature, it slowed its swaying and in the blink of an eye, it landed on my chest.

Death seemed all too close at hand.

It lowered itself towards me and I saw its face.

It was not a face, as we know it, for it had no distinguishable features we'd attribute to one. It had no eyes, no nose, no mouth, instead it had small crater like shapes, all about its face with short quivering tentacles around the outer circumference. And at the exact center, amid the numerous concave indentations, was an orifice, with four small triangular flaps of flesh concealing it.

As I stared at this sickening sight before me, breathing in gasps and gulps, the flaps of flesh veiling the orifice drew back and revealed the pitch-black darkness within.

And then it began to inhale.

I felt my body go cold as the creature inhaled through the orifice and breathed my life out of me. If I could I would have convulsed and shivered but I couldn't. All I could do was stare with horror stricken eyes, heart thudding insistently, head throbbing vehemently, as the creature drained me off my life.

The experience has left me in a state of perpetual fear of the night, but even more so, of sleep itself. Although it’s been a week since that night, I still am unable to get rid of the fear that has so strongly taken root within me. Even the slightest of noises in the middle of the night can now rouse me out of my sleep and leave me breathing heavily, with a pounding heart.

And for how many nights have I not slept at all!

How then, when such is the state of my being, can I expect to be calm and relaxed?

How then can I be certain of my sanity?

How then can my words be trusted?

How then can I be believed?

By Agothe Smyth
Agothe (eh-goh-th) Smyth is a pen name assumed by a voracious reader and bibliophile based in Mangaluru, whose favourite hangout spots include libraries and bookshops. Having read a whole lot of books, he decided on writing his own stories, which can be witnessed at his blog: Sea of Musings. He divides his time between the fictional and the real world, while still retaining his sanity and sobriety. He can be followed on Facebook/Twitter and can be contacted at agothesmyth@gmail.com.
To submit your article / poem / short story to Daijiworld, please email it to news@daijiworld.com mentioning 'Article/poem submission for daijiworld' in the subject line. Please note the following:

Title: That Night When I Woke Up Dead