Udupi, Aug 17: Former minister Vinay Kumar Sorake has said that the Congress party has not urged to remove the Savarkar banner in Udupi.

Responding to the on-going controversy over Savarkar, he said that BJP had broken and thrown the banner hung by the Congress in the past. “Our activists have gone to ask how the banner was hung without permission. Congress does not oppose anybody’s banner. Hanging the banner is the individual wish. We have neither raised nor will we raise the cut out of Savarkar. We will install the banners of Mahatma Gandhi and Jawaharlal Nehru.” 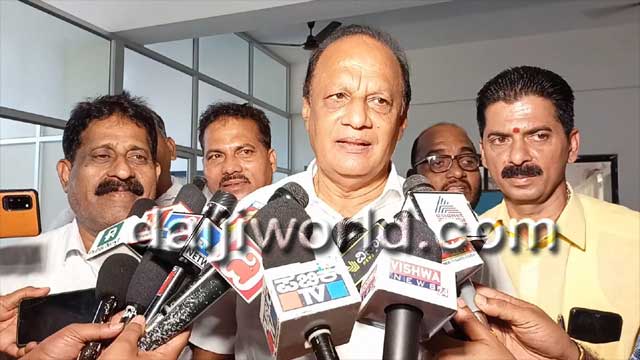 “BJP has not gheraod our office. They have only come to our yard and gone back. Can they gherao during police presence? Let them raise the banner if they have approval. The district congress has not spoken even when the Godse banner was put up,” he said.

Regarding the warning by BJP leaders that they will hang the picture of Savarkar in every house, he said that they do not object to raising the Savarkar banner in front of his house.

“We believe in Gandhiji, Netaji and Bhagath Singh. I do not know much about Savarkar. I have been hearing his name only these days. I do not know if Indira Gandhi had released the postage stamp of Savarkar. Let BJP erect the statue of Savarkar if they want. There are people who see it,” he said.