Karkala, Aug 8: “Congress did not do any development in Karkala for 35 years, but BJP never criticised Congress. Today, Karkala constituency is developed in all sectors by BJP. However, Congress is misguiding people by giving wrong statements,” said minister V Sunil Kumar.

Sunil spoke at the prelude meeting for the platinum jubilee celebration of India’s Independence Day. He further said, “Congress is a party which imposed emergency in the country. It is not able to tolerate the development done by BJP. Congress does not respect the country. It is taking credit for the development done by BJP. They have changed the constitution of the country as they want. It never respects the national flag. Those who shot people who went hoist national flag at Hubballi during Veerappa Moily’s chief ministership are teaching lessons about national flag to BJP. 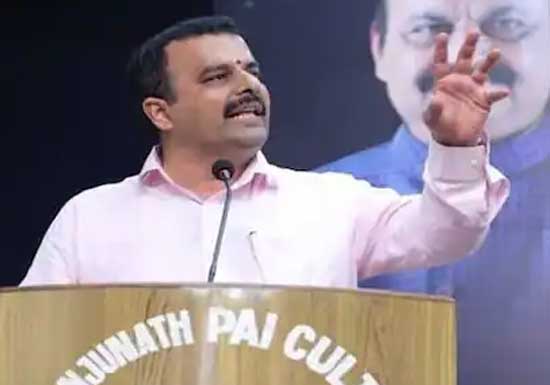 “Moily took oath that he will get BJP defeated and bring back Congress to power. He should have done development when the people of Karkala chose him. But today he is not able to tolerate the development of the constituency. Congress which opposed Karkala Utsav, Ennehole lift irrigation project has anti-development policy and misleading the public of this constituency.

“There are 50,000 houses and 7,000 shops in Karkala. All including people representatives and worker should be ready to hoist the national flag publicly from August 13,” he said.