Kasargod, Aug 4: Kannada medium students of Adoor government higher secondary school near here held a protest accusing the recruitment of teacher for physics who does not Kannada language.

The said teacher was recruited as a Kannada teacher in 2019 at Paivalike government school. Later, due to the protest of the students, she was sent on vacation. According to the directive of the court, she had been to Central Institute of Indian languages of Mysuru for 10 months training in Kannada language. She was recruited to the Adoor government high school on Tuesday August 2. 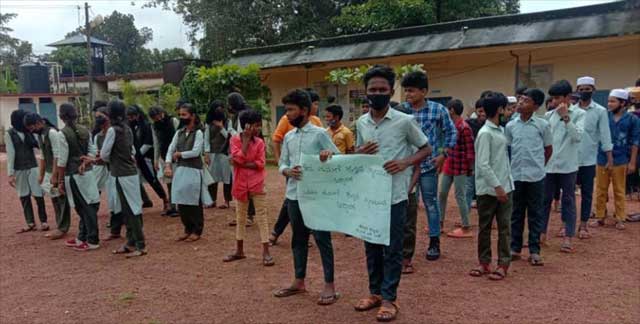 The Kannada medium students submitted an appeal to the head teacher that they are unable to understand her teaching as she does not know Kannada.

Locals say that the students have decided to boycott the classes till the woman teacher is transferred. The parents are also supporting the demand of their children.