Nabbed by ED, Sanjay Raut to be produced in court today

Mumbai, Aug 1 (IANS): The stormy petrel of Shiv Sena and four-time Rajya Sabha member Sanjay Raut, who was arrested by the Enforcement Directorate (ED) on Monday, shall be produced before a special court later in the day.

After an 18-hour suspense starting with a raid by the ED on Raut's home at dawn on Sunday, then his detention and grilling, the firebrand MP was finally arrested in the early hours of Monday in connection with the alleged Rs 1,034-crore Patra Chawl land scam case.

After a medical check-up, Raut shall be taken before a Special Court under Prevention of Money Laundering Act, where ED cases are usually heard, at around 11.30 a.m. 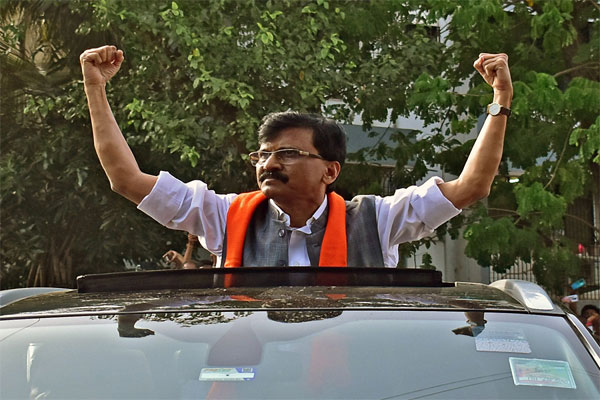 Raut, 61-year is a close aide of Shiv Sena President and former Maharashtra Chief Minister Uddhav Thackeray, plus the Chief Spokesperson of Shiv Sena and executive editor of the SAAMANA Group of newspapers.

Over the years, Raut became one of the most virulent critics of the Bharatiya Janata Party (BJP) besides rallying together the various state and national Opposition parties.

He had gone under the scanner of ED since the time he played a crucial role in the formation of the erstwhile Maha Vikas Aghadi government which fell in June 29 after 31 months in power.

Meanwhile, Sanjay Raut's brother and Shiv Sena MLA Sunil Raut said that with the arrest, the BJP is trying to muzzle the voice of Shiv Sena.

"We are not scared by all this bogus actions... Raut saheb will fight, we all shall fight... the Shiv Sena will fight but will not now before the BJP, Sanjay Raut will never leave the Sena," he said.

Title: Nabbed by ED, Sanjay Raut to be produced in court today