Mumbai, Jul 5 (IANS): Following heavy to very heavy rainfall since Sunday, several rivers across Konkan coast in Maharashtra, especially in Ratnagiri district, have been flowing above danger mark, leading to flooding of the low-lying areas and prompting deployment of NDRF for rescue efforts on Monday.

With the Jagabudi river in Khed tehsil flowing above danger mark, residents in the area have been directed to evacuate. The NDRF has deployed its team along with the dog squad at Chiplun in Konkan area, according to an official from the State Disaster Management Authority. 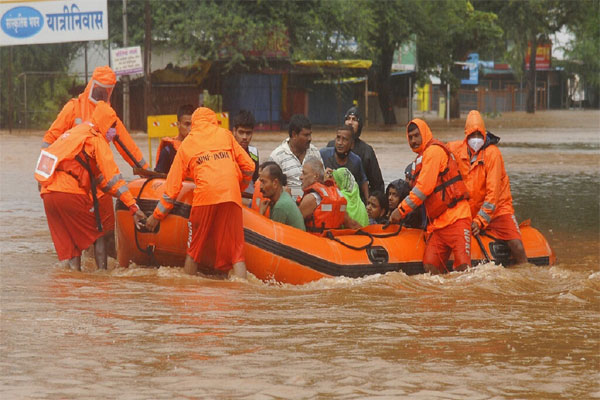 "Under the influence of formation of low pressure area and intensification of monsoon flow, the west coast is expected to receive heavy rainfall, hence, alert may be kept for the rise in river water levels of sub-basins of Vashishthi and Terekhol Tillari in Raigad, Ratnagiri, and Sindhudurg districts," an advisory from the Central Water Commission (CWC) said.

In fact, the CWC advisory had a warning for the entire Konkan belt starting from Palghar in the north till Sindhudurg in the south Konkan stating that due to continuous rainfall scenario, surface flow has increased over the region, hence more alert has to be kept in these districts.