Mangaluru, May 9: The trailer of much expected coastal wood movie ‘Raj Sounds and Lights’ directed by Rahul Amin was released on Monday, May 9.

The movie is set to release on May 20.

‘Raj Sounds and Lights’ have set a benchmark with a world premiere in 11 countries and 6 major cities in India. 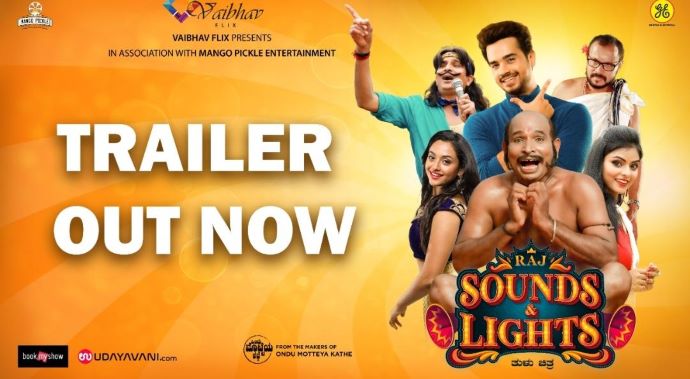 The makers of 'Ondu Motteya Kathe' are back after three years with a comedy and family entertainer titled 'Raj Sounds & Lights'. The movie is presented by Vaibhav Flix in association with Mango Pickle Entertainment.

The story in penned by VJ Vineeth, while the screenplay was written by Director Rahul Amin along with VJ Vineeth.

The movie has been captured by Paddayi fame Prasad P and assisted by Jacob Johnson. The dialogue has been written by Girgit fame Prasanna Shetty Bailoor.

The songs for the movie are composed by Srujan Kumar Tonse and edited by Plangle studio. The stunts in the movie have been performed Chethan D'Souza and the choreography is by Naveen Shetty Aryans.

The movie raised lot of expectations among the public prior to its release. The motion poster of all the actors has been released and received an immense response from the public.

'Nalipu Dhamal' song from the movie has already been released to which the audience is already footapping. Two weeks ago, the lyrical love track was also released.