Shivamogga, May 6: Karnataka Regional Service of Communion (KRSC) is blessed with a new team for the year 2022-2025 at KRSC Reconstitution meeting held at SANNIDHI Shivamogga on May 4 and 5.

KRSC meeting began on May 4 morning with Adoration from 6:30 am to 8 am led by Fr Franklin D'Souza, KRST spiritual director.

At 9 am Rosary was led by the diocese of Karwar, Udupi and Belgaum. Then Praise and Worship was led by Bro Anthony Raj and team from Bengaluru.

At 9:45 am inauguration was held by installing the Word of God. Bro Joachim Pinto KRST officiating chairman brought The Holy Bible in procession and Lawrence Mukkuzhy, episcopal adviser of KRSC received it and honoured it. 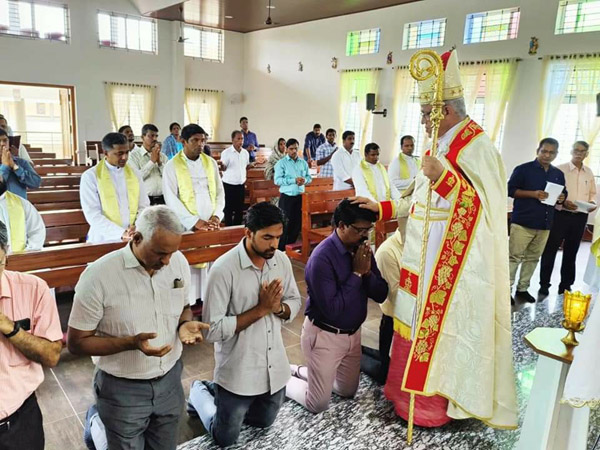 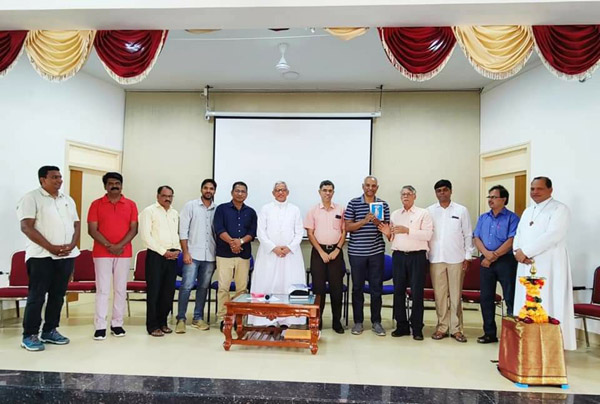 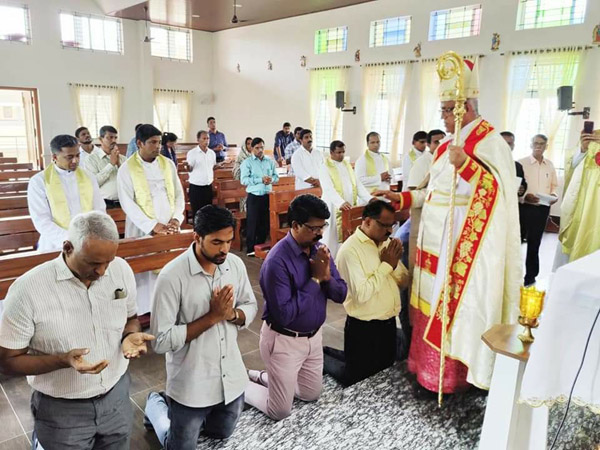 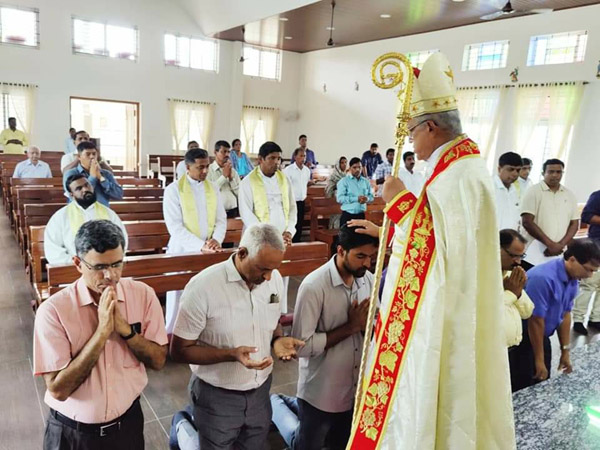 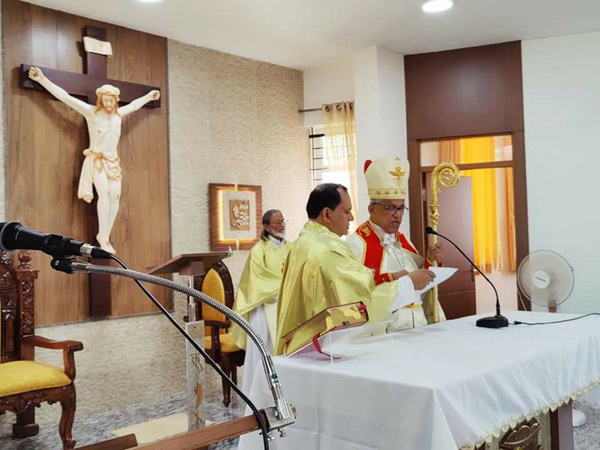 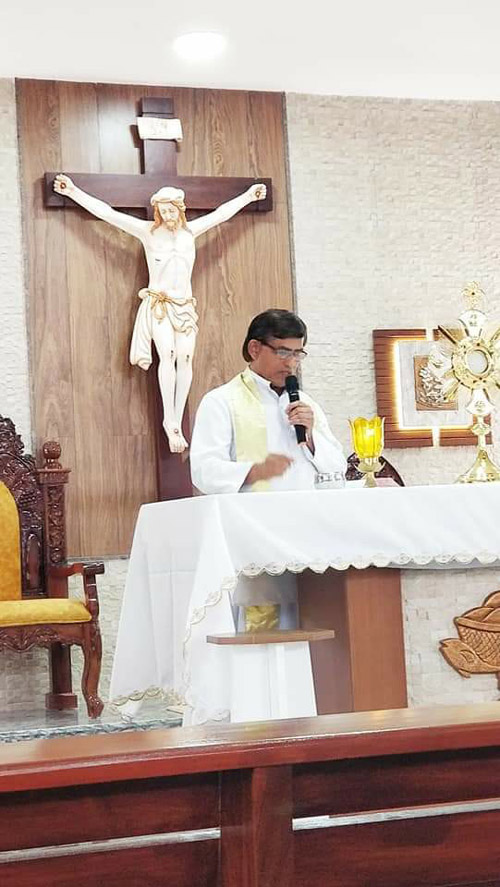 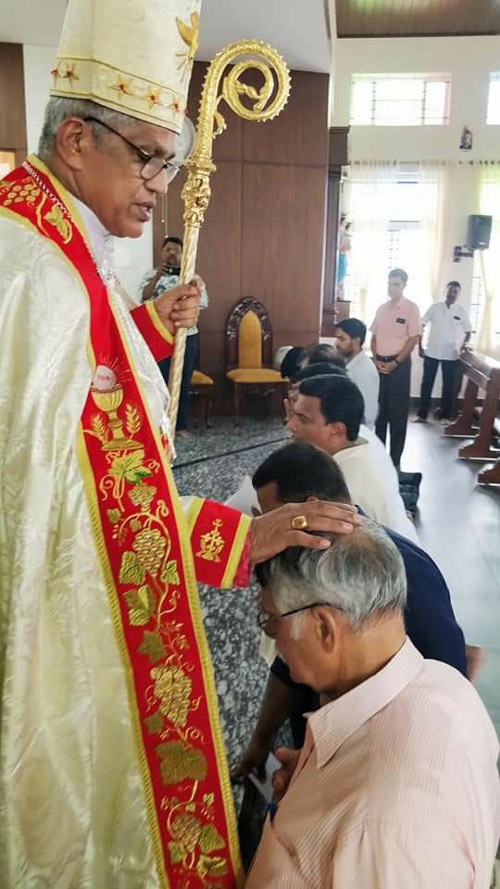 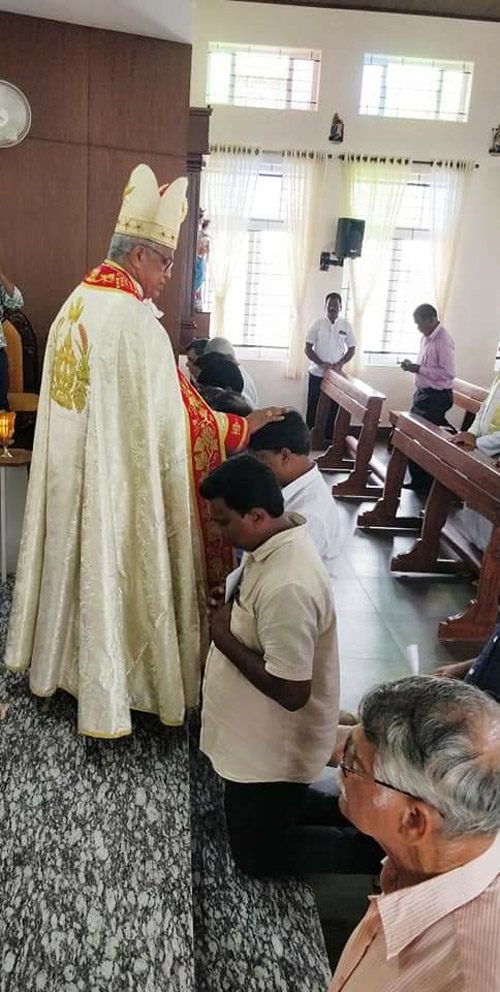 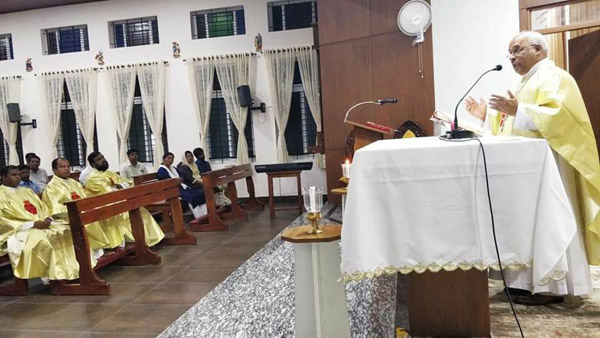 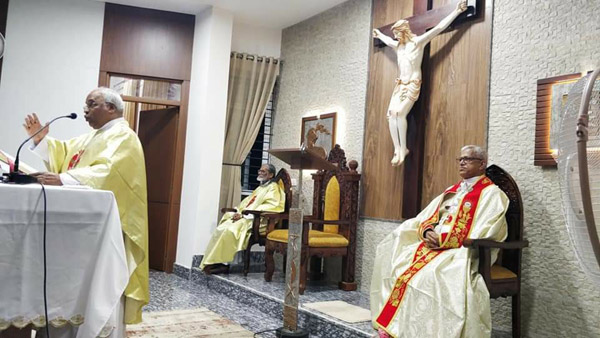 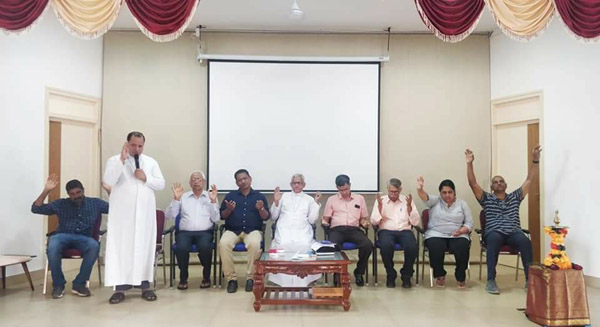 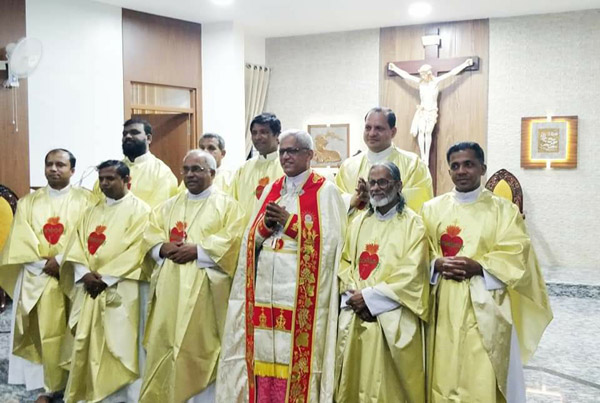 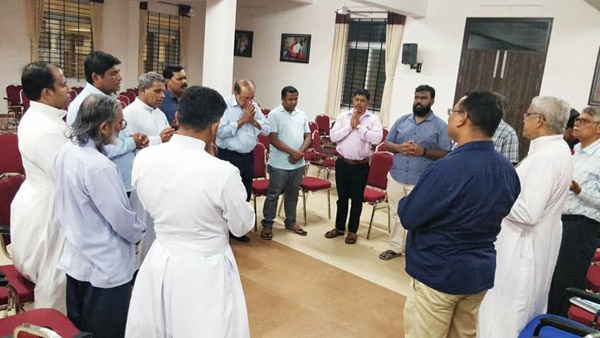 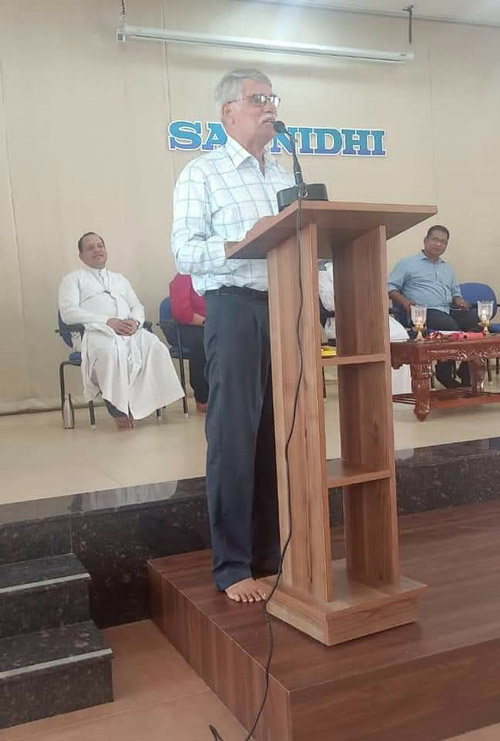 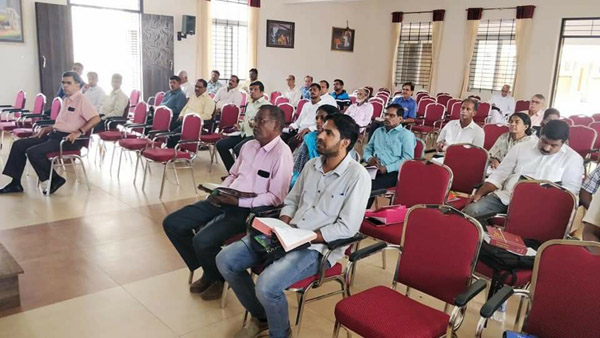 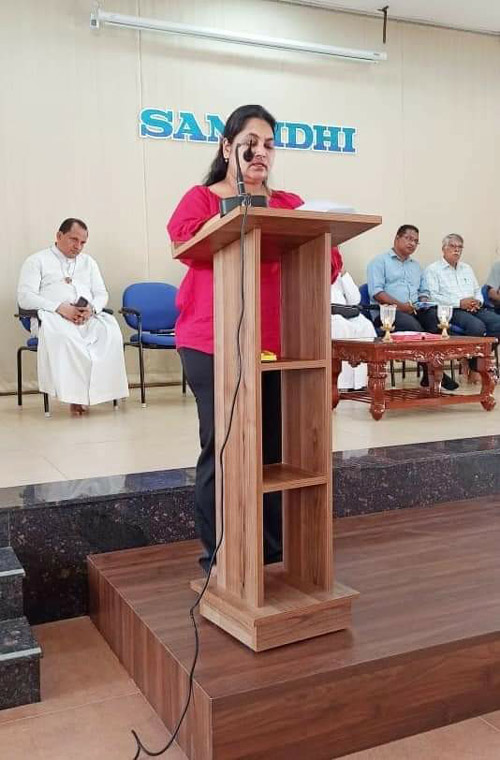 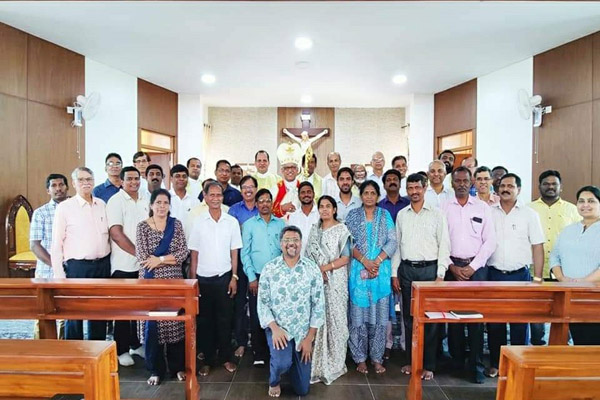 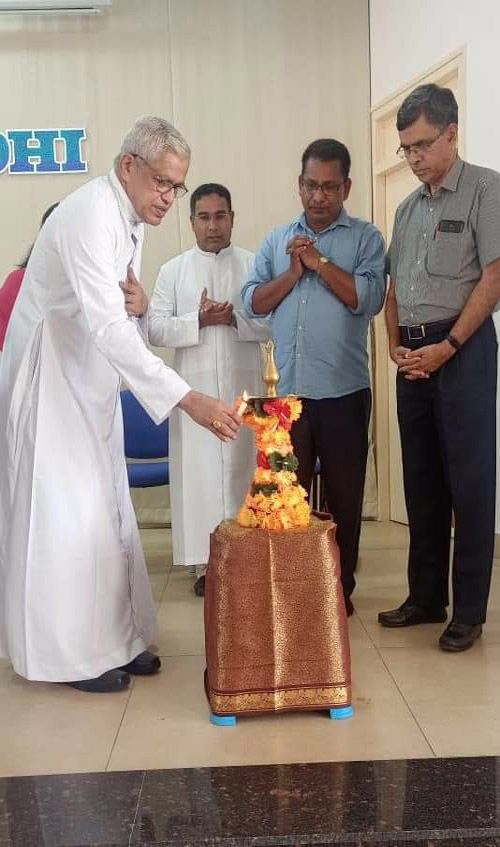 First day participants were led in the spiritual experience. Resource person Savio Mascarenhas took three sessions. Namely; the statutes and its importance, importance of discernment in the formation of a team and importance of teams and ministries, prayer groups - The building blocks of CCR.

At 12pm Fr Franklin D'Souza led the group in to adoration and Bishop Lawrence led the healing prayers.

At 7 pmDr Francis Serrao SJ, bishop of diocese of Shimoga offered the Eucharistic celebration together with bishop Lawrence, Monsignor Philiph Kutty- vicar general of diocese of Belgaum and ten spiritual directors of various dioceses of Karnataka. In his homily he spoke on 'Witnessing the Word of God in the Region of Karnataka'. He explained the Mathew 7:24-28.

After the dinner at 8:45pm bishop Lawrence and NSC chairman Bro Joy Anthony addressed the spiritual directors and chairmans of various dioceses of Karnataka.

On May 5 day began with adoration at 6:30 am. Fr Franklin D'Souza prepared participants for the good confession. All the participants did their confessions.

At 8:45 am Bro Anthony Raj and team led the praise and worship. Then at 9 am participants remembered late Bro Simon Rodrigues, chairman of KRST and Late Bro Benjamin Gonzaga for their contribution to the Charismatic renewal and paid their homage to both of them.

At 9:15 am Selection process for the Service of the Lord Jesus in the Region of Karnataka led by NSC chairman Bro Joy Anthony, Bro Savio Mascarenhas and bishop Lawrence. Those candidates introduced themselves and showed willingness to serve the region. Then the selection process was led. At 11 am discernment team started the process. Meantime intercessory adoration was held in the chapel. Fr Elias Sequeira - spiritual director of diocese of Chikmagalur led the intercessory adoration.

Finally through discernment Region of Karnataka as per the Statutes of Charis Seven were selected for the year 2022-2025. They were;

At 1:30 pm bishop Lawrence Mukkuzhy celebrated the Holy Eucharist. He preached a homily based on Mathew 5:23-16. After the homily, he led the Oath taking ceremony after the homily and also installed the newly selected KRSC Members. He also prayed over them.

After the lunch break all gathered for the thanking if outgoing members as well as to welcome the newly selected members. Fr Franklin D'Souza led the programme and thanked outgoing KRSC for their services. He also welcomed the newly elected KRSC members.

The programme came to an end with bishop's blessings upon the participants.