Guwahati, Apr 30 (IANS): Gujarat's Independent MLA Jignesh Mevani, who was granted bail by the District Sessions court in Assam's Barpeta on Friday, said on Saturday that he was arrested by the Assam police "following instructions from the Prime Minister's Office (PMO)".

Mevani, while addressing a grand reception accorded by the Assam Congress in Guwahati, said that after PMO's instructions, Assam Police went to Gujarat to arrest him following his appeal to Prime Minister Narendra Modi to urge people to maintain peace and harmony after the communal violence in Gujarat. 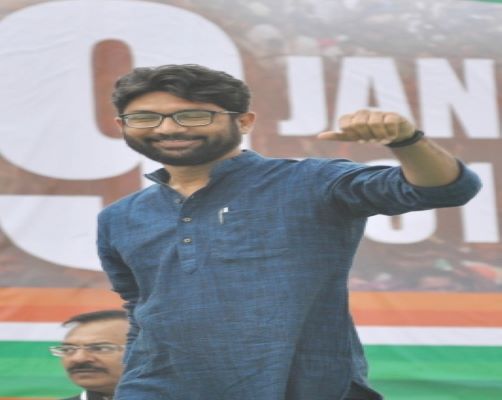 "After bringing me to Assam and following my bail from the Kokrajhar court, the Assam Police again cowardly arrested me by making a lady police officer a scapegoat. After arresting a Gujarat MLA, problems of unemployment, electricity, farmers and other backward people of Assam would not be solved, this should be realised by the people of Assam," said Mevani, who is also the Convener of Rashtriya Dalit Adhikar Manch.

He said that the Assam Police's "rampant extra judicial killing" must be stopped and people must agitate against such "barbaric acts".

He said: "The RSS people earlier said to throw away the Indian constitution to the sea. From the RSS and BJP, we can not expect democratic actions. They are destroying everything in the country."

Assam state Congress president Bhupen Kumar Borah said that the Assam Police must apologise to the people of Gujarat for arresting their MLA on a fake case.

The District Sessions court in Assam's Barpeta on Friday granted bail to Mevani, who was first arrested by the Assam police on April 20 in Gujarat in connection with an "objectionable" tweet against Prime Minister Narendra Modi.

The 41-year-old legislator, who was elected from the Vadgam Assembly constituency, was arrested by the Assam police on April 20 (from Gujarat) and taken to Kokrajhar district the next day.

The Barpeta police arrested him again on April 25 soon after the Chief Judicial Magistrate court in Kokrajhar district granted his bail.Mevani was sent to five-day police custody by Barpeta's chief judicial magistrate on April 26 on charges of "voluntarily causing hurt", "criminal force to deter public servant from discharge of duty" and "force on a woman cop intending to outrage her modesty".

Meanwhile, the Congress organised a series of demonstrations across Assam since last week against the "undemocratic arrest" of Mevani, who had earlier pledged outside support to the party.

The Gujarat legislator was arrested in his home state on April 20 following a complaint filed against him by an Assam BJP leader seeking action against Mevani under the IT Act.

Mevani had earlier alleged that his arrest is a deep-rooted conspiracy by the BJP and RSS.