Mangaluru, Mar 21: "Savarkar was the first ideologue to promote what we now call RSS's Hinduvatha ideology. He is the first person who gave the slogan that there are two nations in Bharath. The Hindu nation and the Muslim nation. And the two nations will always be apart. So, his whole ideology was based on linking the aspect of citizenship to religions. And it was his slogan repeated by Muhammed Ali Jinnah and developed into a two-nation theory," Brinda Karat,Politburo of the Communist Party of India (Marxist) said. 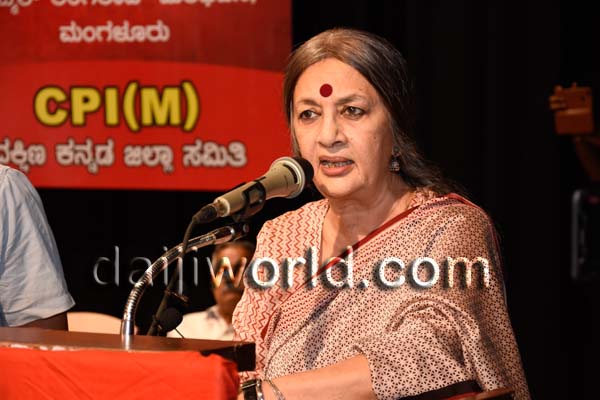 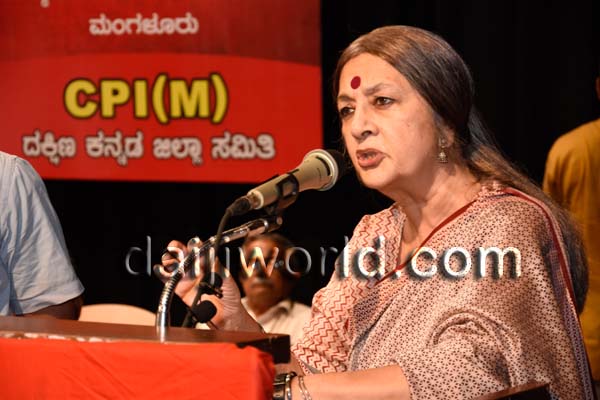 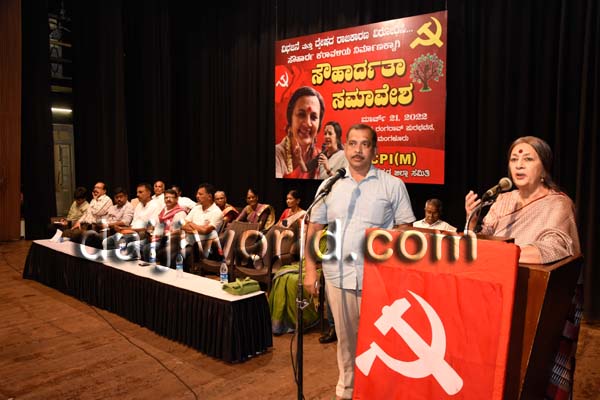 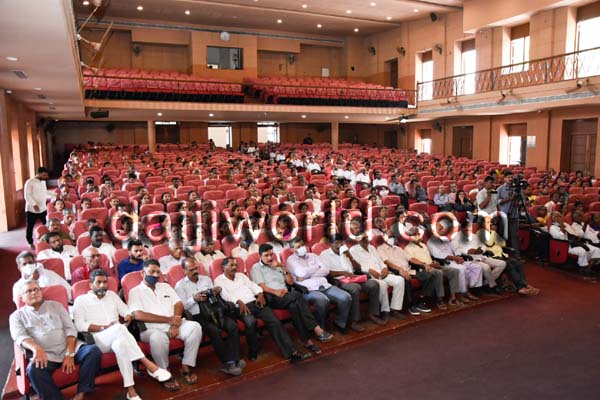 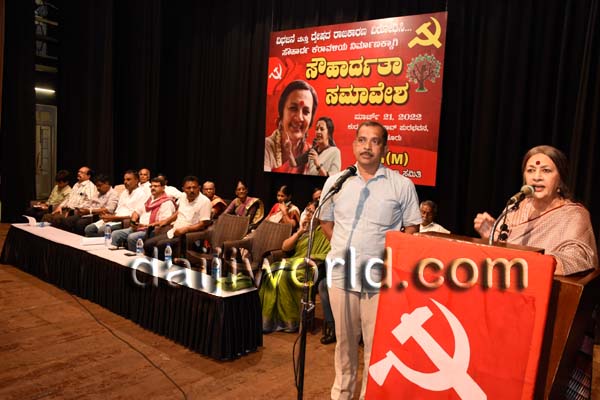 Addressing the harmony convention in Town Hall here on Monday, March 21, she said, "When the nation was united to end the British raj, these two trends within India, of fundamentalism and prominence of religious sectarian identity harmed the development of the united national struggle. Those were the seeds planted by both the forces during India's freedom struggle. As a result, the tragedy of partition and loss of lakhs of lives occurred. And they fulfilled their desire of sectarianism and theocratic understanding of citizenship."

However, she added, "In India, Savarkar or his political progeny did not succeed. They tried hard. When the constitution and constituent assembly were being formed, we know what are the difficulties Ambedkar faced from the right-wing forces. The Constitution of India is a reflection of the aspiration of all the people of India."

"Those who don't accept the constitution of India and the four pillars of the constitution are causing disharmony in the country. Today, the government led by Narendra Modi has given the slogan Amruthmahostav to celebrate 75 years of Indian Independence. During the course of this celebration, we need to ask the question: What is the role of your (BJP) political ancestors during the Independence struggle? Today they are projecting their icon V D Savarkar. But, what was the role of V D Savarkar in the freedom struggle? What was the ideology that he promoted,", questioned Karat.

"In 1950, when the constitution was adopted, 'The Organiser', a publication by RSS wrote that this constitution is not the Bhatrathiya constitution. The constitution of Bharath should reflect the values of Manusmrithi. It is very important to remember that history because today those in power want to wipe out that history. They do not have freedom fighters of their own. They want to hijack the freedom struggle. They want to manufacture their own heroes. Those who wrote letters of apology begging for forgiveness from the British monarch, they want make those the heroes of the country. Today they are repeating the divide and rule policy. They are into 'Bharath Thodo not Bharath Jodo'. They are trying to bulldoze the diversity of India," she alleged.

She also commented on the BJP government refusing permission for one of the greatest social reformers, Narayana Guru's tableau in the Republic Day parade. "Narayana Guru is a leader of not one particular community but he led a revolution against casteist practice. He fought for the right to education, he fought for equality. When we celebrate the 75th year of Independence, we need to go back to our history of radical social reforms. It is done because of ideology. It is the communists today who are the uncompromising in their fight against this Manuvadi or Brahminical, dictatorial, and authoritarian approach to Indian society. We oppose this but the RSS and BJP symbolise this. So, the ideology of RSS will only affect minority communities but each and every citizen of India. It is changing the very nature of the Indian republic, democratic rights, civil liberties, the right to dissent, and the right to privacy. Everything will be bulldozed by the pro-corporate, communal, authoritarian regime of Modi, RSS government", opined Brinda Karat.

Speaking on Vinaya Baliga's murder, she said today the family of Vinayak Baliga wass suffering due to intolerance created by Modi, BJP and RSS. "The killers all belong to the organisation which was formed in 2014 called Namo brigade. Many of them are supporters of BJP and have connections with the party's top leaders. Even after six years of his brutal murder, the chargesheet has been not filed. He was a supporter of BJP but he was brutally killed because he questioned the corruption in the temple," she said.

"BJP does not represent the labour class of India. They represent the corporates of India. We will not tolerate your lies. You representant corporate and Manuvadi interests. You are against the struggles of the oppressed for emancipation", she pointed at BJP.

Speaking on the Hijab issue, Brinda said, "The Right to education is a universal one. According to their own choice, they can wear a headscarf. In the Kendriya Vidyala run by the central government, there is no rule that the girls cannot wear the headscarf. We are totally opposed to the circular issued by the government restricting the Hijab. Therefore, the government of Karnataka's circular which prohibits the use of the head scarf in the name of public order is deplorable. It is extremely unfortunate that the Karnataka high court, in its judgment, has upheld the totally unconstitutional prohibition of the headscarf by the Karnataka government. We believe that the High Court judgment must be readdressed and hopefully sooner or later, by the Supreme Court of India."

She also slammed MLA Raghupathi Bhat for provoking Hindu students to wear saffron shawl. "The state government has not taken any steps against provocative statements by the MLA of that area. This is a manufactured issue - an issue which has a deliberate political motive to divide people. Let the parents of the girls decide about Hijab. Nobody can force the girl to wear or not wear a headscarf. There are fundamental forces within the Muslim community who criticize BJP and RSS for taking away a girl's right but at the same time, they will compel the girl to wear the headscarf by threatening her with social boycott. We cannot tolerate it whether it is PFI or SDPI. We know in many areas they have been mobilizing people on the non-democratic platform to force the girls to take up a position. We cannot support such things. We appeal to all sections of society to fight for the rights of women," she urged.

Speaking on Anti Conversion Bill, she said, "If Baba Saheb Ambedkar was alive today he would be the first person to be jailed by this law. Anybody can raise objections under this law. The burden to prove will be on the person that he is not forcefully converted. This is one of the worst pieces of legislation that we have seen. It legalizes coercive Ghar Wapsi. This is not just an attack on Christians but it is also an attack on the Constitution of India. The constitution is based on the spirit of the Republic of India and not theocratic Hindu Rashtra of India. Forces like BJP, RSS are the greatest threat to harmony, diversity and unit of India," Karat said.