Raichur, (Karnataka), Jan 27 (IANS): Protests broke out in Karnataka's Raichur district on Thursday in wake of District Judge Mallikarjun Gowda getting the photo of Dr B.R. Ambedkar, which was kept along with Mahatma Gandhi's portrait, removed during the 73rd Republic Day celebrations.

The video of removal of Ambedkar's photo has gone viral on social media and created outrage in the state.

BJP MLA and former minister Shivanagouda Naik on Thursday that the judge's act is a matter of shame and demanded his immediate sacking. 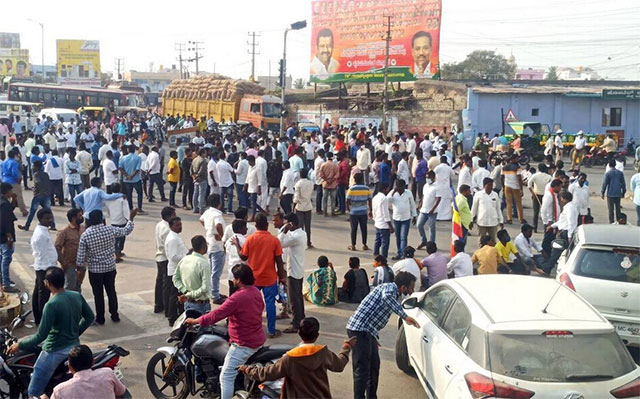 The protestors, who blocked arterial roads in the city, demanded that the High Court should take suo moto notice of the issue and sack the judge. They also demanded a public apology from the judge for his action. "The High Court must see to it that such incidents do not occur again," the protestors demanded.

SFI state Vice President and advocate Shivakumar Moolimani said that District Judge Gowda refused to unfurl the flag on Republic Day, saying the protocol does not allow him to do so if Ambedkar's photo is kept. The judge also maintained that he will be in trouble if he does so. Later, he had the photo of Ambedkar removed and unfurled the flag.

"Ambedkar's photo is being kept in Bengaluru Civil court, Kalaburagi Civil Court, and no judge has objected and raised such an issue. The same judge had objected to placing the photograph of Ambedkar on November 26, which is celebrated as Constitution Day. The advocates had to strongly protest to retain the photo in the function organised by Raichur Bar Council and the District Legal Services Authority," he added.

Ayudha Puja was celebrated in the premises of the court and but no objection was raised, said Moolimani. "We are also demanding review of all his judgments," he said.

Naik said that the judge had insulted the Architect of the Constitution. "He has displayed a distorted mindset by his act. The judge refusing to unfurl the tricolour until Ambedkar's photo is removed is a matter of shame for civilised society.

"This is painful. The act has caused outrage all over the state. The High Court should intervene immediately and sack the judge who still has the mindset of untouchability. I will bring this matter to the notice of the government and Law Department," he said.

Title: Protests in Karnataka's Raichur over removal of Ambedkar's photo at R'Day event