Udupi, Jan 20: The issue of wearing Hijabs when attending classes continues to remain unresolved at the girls PU college here since the last three weeks. The girls have stuck to their demands to wear Hijabs, stressing that they have the right to do so.

One of the girls, Alia Banu, says that meetings of parents are frequently convened. The parents support their kids. The college has been seeking leave applications on the ground of ill health which the girls feel is unjustified. 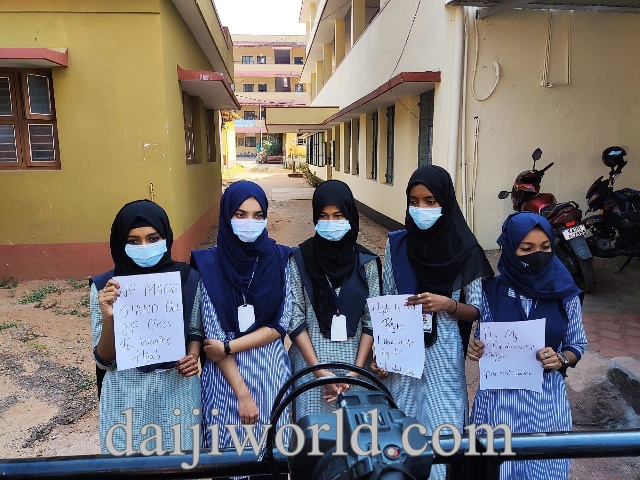 Alia Asadi says that the girls want education and also the Hijab. “We need education. We need Hijab too. Our parents had approached to permit wearing of Hijab during the first year but we were not granted permission. We are willing to wear the scarf made from our uniform, but we have not received the permission for that too. Lockdown was imposed later. The confusion began during the second year. Three weeks have passed by. We want justice on the whole. We should be allowed to attend classes,” she says.

The affected girls who waved placards in front of the college gate, shared their grievances in the presence of media persons.

The controversy surrounding the denial of permission to six girl students to classrooms for wearing hijab in the Government Girls Pre University College in Udupi of Karnataka has taken a political turn with the state Education Minister B.C. Nagesh dubbing it a "political" move and questioning whether learning institutions have turned into religious centres.

Interacting with IANS on Thursday, the educaion minister stated that the decision had been taken by the School Development and Management Committee in 1985 with regards to uniforms in the campus. "So far, all children are following the rule. Whichever institution it is, if they make a rule, the students who want to study must be obliging. All these days the uniform rule was followed and why did they suddenly change?" he asked.

"If good things are implemented with a good thought we will support, if they are doing the opposite how can it be supported? They weren't aware of their religious freedom as well as constitutional rights all these days? All of this has been started just one year before the elections, We will take a decision at the level of government regarding the issue," he said.

"Do you want schools to be religious centres? There are more than 100 children belonging to Islam religion studying without any problem. Only a few of them have problems with wearing uniforms. School is not a place to preach the religion," he maintained.

Masood Manna, State Committee Member of Campus Front of India maintained that they are waiting for the government order. "It is a violation of the right of education and the right to practice religion. The students are not just fighting for themselves, but they are also fighting for coming generations to wear hijab while attending classes," he said.

"If there is no solution given we will stage a protest. The students are facing mental torture. They are asked to go out by themselves or else they will be pushed out of classes if they attend classes wearing hijabs," he said.

"Assistant Commissioner, Minority department officials and the Principal of the college have held a meeting on Wednesday in this regard. They have asked the students to come without hijabs. The protest will be staged under the banner of All Students Union in Udupi," he explained.

With Inputs from IANS