New Delhi, Jan 18 (IANS): Around 1000 drones, 75 military aircraft and tableaux of 12 states and Union Territories and nine ministries will be part of the Republic Day celebrations at Rajpath in the national capital.

Interestingly, the government has introduced two important changes -- Republic Day celebration week will be held from January 23 to January 30 and the main function will begin 30 minutes later on January 26. 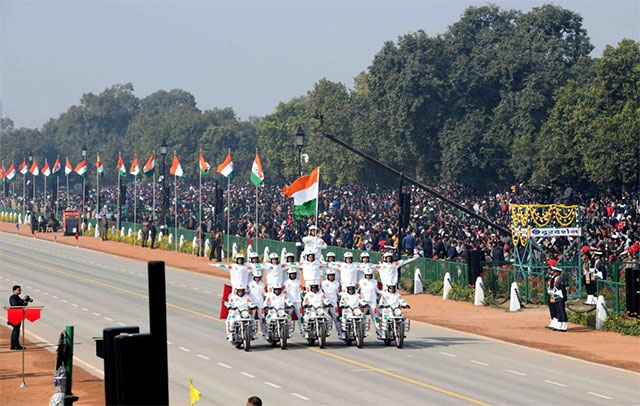 The celebrations will begin from January 23 to mark the 125th birth anniversary of Netaji Subhas Chandra Bose. It will end on January 30 to commemorate Martyrs Day.

Further, a number of visitors at the Republic Day parade has been curtailed significantly. Last year when the first Covid-19 wave was ebbing down around 25,000 visitors were allowed. This year, the number has been significantly curtailed between 5,000 to 8,000 and still is being worked out as Covid-19 cases have increased significantly.

The government is encouraging the hybrid mode to watch live the Republic Day celebrations.

At the parade 12 states and Union Territories and nine ministries and departments will showcase their tableaux. The states which have been selected include Arunachal Pradesh, Haryana, Chattisgarh, Goa, Gujarat, Karnataka, Meghalaya, Punjab, Uttar Pradesh and Uttarakhand.

It is not possible to select all the states' Tableaux, said a senior government officer adding that it is a long process. "A technical committee of experts makes these decisions and takes them sufficiently in advance and thereafter the tableaux are made," said the officer.

Letters received from Chief Ministers of West Bengal and Tamil Nadu to the Ministry of Defence have been given polite responses explaining how the selection process is constituted.

Two new events at the 'Beating The Retreat' ceremony on January 29 have been approved. First laser projection on parapet of North and South Block commemorating 75 years and drone show will be held by a startup from IIT Delhi with nearly 1,000 drones.

The startup India of the IIT Delhi -- Bot Lab Dynamics -- will be showcasing a swarm drone display of 1,000 drones themed on 75 years of Independence on January 29 on the day of Beating The Retreat.

Further in a special programme at the India Gate, Prime Minister Narendra Modi will confer the Netaji Subhash Chandra Bose Apada Prabandhan Puraskar in recognition of the contributions in disaster managment to individuals and institutions.