Bengaluru, Jan 16: The state government's move to hike the salaries of guest lecturers has failed to pacify protestors who are demanding job security. Even after the government's announcemnet, the guest lecturers’ association of Karnataka has made it very clear that their fight was for the security of their job and not salary hike. They have continued their protest asking the government to provide them service security on the lines of the West Bengal model.

The state government recently doubled the salaries of guest lecturers working in government degree colleges throughout the state. 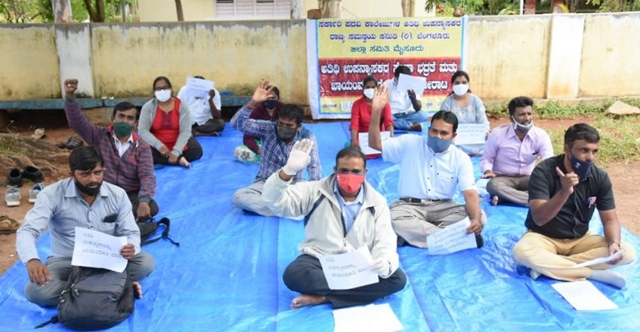 Reacting to the move, the guest lecturers said, "When we boycotted the classes and began our protest, we urged the government to provide us job security till we reach the age of 60. However, there is no mention of any kind of move to this effect in the government's order. In addition, guest lecturers who were recruited recently have been retained in the respective colleges depending upon the number of students.

"According to new rules, every year we need to apply and renew our employment. The new rule has caused more insecurity in our job," they said.

Shivappa, president of the association said, "Our work has increased from seven to eight hours to 15 hours. This means that out of the 14,800 guest lecturers, around 7,000 are going to lose their jobs straightaway."

Meanwhile, higher education minister, Dr C N Ashwath Narayan requested the protesting lecturers to get back to work as their salary has been doubled. Giving details of the package announced by the government, the minister said, "The process of recruiting guest lecturers for the new academic year will begin on January 17. Eligible candidates will be recruited for a period of one academic year. Salary will be paid before the 10th of every month."

Those who are interested to work as guest lecturers in government colleges need to register themselves from January 17. The link for registration will be given on college education department's website. Guest lecturers can choose five colleges of their choice, out of which one will be allotted to them by the department. They have to mandatorily work in that college.

There is a difference of opinion among guest lecturers with regard to work as per the new rules of the government. While some are interested to work with double salary, others are demanding job security. However, as per new rules, only 8,000 people may get jobs. If interested people among the 14,800 guest lecturers register themselves, there is a chance that the protest might break.

Guest lecturers in coastal districts have expressed disappointment at the decision of the government to increase the working hours from 8 to 15 hours in addition to increase in salary. They are saying that more than half of them will lose jobs because of increase in working hours.

At the beginning of the current academic year, 14,800 guest lecturers were appointed on temporary basis. They worked for two months and are protesting since a month.

Guest lecturers in the twin districts said, "The state government has given time limit of three years to get UGC eligibility. If it is not possible, we have to go home in spite of the number of years of service we have put in. So we are not happy with the decision of the government."

Dr Shahida Jahan, president of Udupi district guest lecturers’ welfare forum said, "The state BJP government is saying that they have given us sweets on the occasion of Makara Sankranti by doubling our salaries. In reality, the government has given us bitter news as more than 7,500 guest lecturers are likely to lose jobs. This is a plot to continue keeping us as guest lecturers only. Our protest will continue till we get job security along with salary hike."