Mangaluru, Jan 15: "The Padayatra organized by the state Congress on the issue of executing Mekedatu project is an out and out political gimmick aimed at bringing disrepute to the state government. It was a part of the conspiracy hatched by that party to sully the image of the government," said Mangaluru (south) MLA D Vedavyasa Kamath.

He accused the Congress of misleading the people of the state by fighting for an issue that was already in the court. "Karnataka Pradesh Congress Committee president D K Shivakumar and his followers should have shown respect to the judiciary. They knew the case was in court but continued to treat the system with disdain and gave rise to confusion. People of the state will teach a fitting lesson to the Congress for wrongly guiding them," MLA stated. 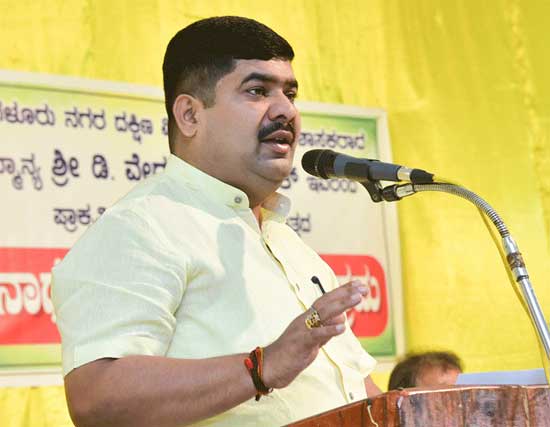 Kamath said that it is the responsibility of the state government to provide enough drinking water to Bengaluru and other places. "Our government is committed to discharge that responsibility. However, the implementation of the project has been halted as Tamil Nadu government has approached court against the project. If it is possible, Shivakumar and his team have to visit Tamil Nadu and convince the government there to withdraw the court case," he said, while advising the Congress not to provide wrong information and guidance to the people and deceive them through falsehood.

He charged the Congress of contributing to the proliferation of covid19 infection by holding Padayatra when the third wave of the pandemic is sweeping the state. "By not honouring requests and demands made from various quarters against holding the Padayatra, the Congressmen have shown their lack of concern towards the health of the citizens. We hope that the Congress, at least now, upholds the judicial supremacy and cooperate with the state government on the issue of Mekedatu," he exhorted.