Karwar, Dec 8: Yakshana, a folk art form, gives a lot of importance for traditional values and traditions in costumes, language, steps, make-up and presentation. It is one of the forms where traditions have been retained to a large extent.

Now, a few Yakshagana artistes have attracted the ire of the connoisseurs of Yakshagana by serving Masala Dosa at a hotel to signify its inauguration. The Yakshagana artistes from Uttara Kannada district, who were involved with this incident, have tendered public apology for a mistake that was unintentional. 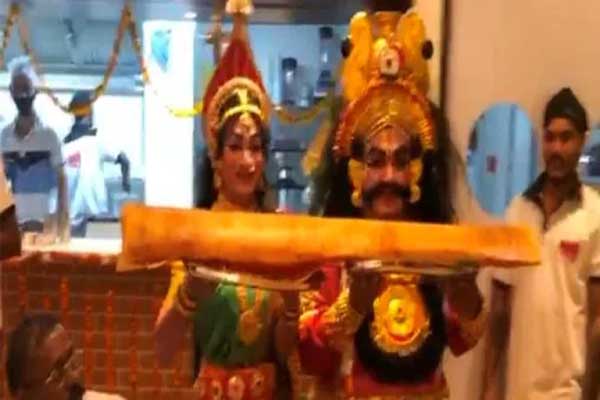 A Yakshagana programme had been organized at Nagpur from November 24 to 26. Some artistes from Yellapur had participated in this programme. On the last day, a hotel was inaugurated there. In the evening, the hotel owner created a scene in which Yakshagana artistes in their traditional costumes and make-up were projected as serving Masala Dosa to dignitaries. The customers and the dignitaries were happy to be served by artists dressed as royals, but the scene which went viral in the social media, also attracted anger of people who feel that serving Masala Dosa in Yakshagana attire was wrong.

The artistes said that they took part in Yakshagana presentation, demonstration program and then participated in the inaugural of a hotel of the programme organizer. They said they were requested to inaugurate the hotel by serving Masala Dosa to dignitaries and the artistes obliged them. There was no evil intention behind this act and the hotel owner was also well meaning. They said that it was a mistake committed by oversight and they feel that they do not deserve the harsh words and obscene comments hurled at them through the social media. They added that they regret the incident if the Yakshagana lovers are hurt by it

The artistes said that people are not talking about absurdities that have crept into Yakshagana performances like Lungi dance, western wrestling, use of Yakshagana in advertisements, cockfight etc. They says they fully support the efforts of Yakshagana Academy or authorities if they make efforts to weed out unnecessary things from Yakshagana performances towards retaining its traditional values. Artistes, Bhaskar Gaonkar Bidremane and Sadashiva Malavalli, felt that there is a need to chalk out a clear-cut framework in which these performances can be held.