Omicron seems to be very transmissible, can be detected soon: Top Indian virologist

The virus was first detected from a sample taken on November 8 in southern Africa's Botswana. It was officially notified on November 24 and within two days, it was designated as Variant of Concern (VoC) by the World Health Organisation.

According to the global health body, the variant has now spread to 23 other nations. In South Africa, it has led to an "exponential" spike with Covid infections doubling. 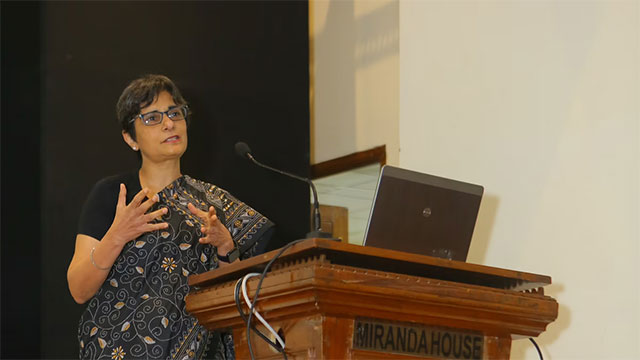 Speaking to IANS, Kang, who is the Professor, The Wellcome Trust Research Laboratory, Division of Gastrointestinal Sciences, Christian Medical College, Vellore, said: "We've travelled from India to other countries and from other countries to India quite reasonably in the last few weeks. Now, the variant has travelled to 20 odd countries and this is just in the five days since the variant was described."

Prof Kang noted that the "concern with this variant is because it has so many mutations right now". The variant has more than 30 mutations on the spike protein.

However, she noted that currently there is no information regarding the severity of the virus "because most of the cases are being seen in young people, in travellers who are likely to be generally healthy".

There is also no evidence at the moment that this can escape vaccines. "But based on computer modelling data, it does look likely, but until we have data from the laboratory and from people who are infected with this strain, and only after they are vaccinated can we tell what vaccine performance will be like against the strain," Kang said.

Meanwhile, the WHO had stated that Omicron is found in the S-gene, which encodes the spike glycoprotein of the SARS-CoV-2, the virus causing Covid-19, and is also targeted to specifically detect the presence of SARS-CoV-2.

According to Prof Kang, this will boost early detection of the variant. Once a PCR test is done, it looks for three target genes: Spike (S), nucleocapsid or inner area (N2), and envelope and outer shell. If an S gene is detected, it is unlikely to be Omicron, on the contrary if an S gene is not detected, the person is positive for Omicron.

"Fortunately for us, this is a virus where you don't necessarily need sequence data to be able to say that this is the variant that is trending. It has what's called an S gene dropper, which means that of the three target genes that are used in certain kinds of PCR, one of those target genes will not be positive.

"So you can actually say based on PCR law, whether a person is likely to be infected with your micron barrier, so that will give us more accurate data."

Prof Kang said India has the apt tools to fight the variant and avert an impending third wave in the country.

"Omicron is a natural process of evolution of the virus. We've had other variants before we had Alpha, Beta, Gamma, and Delta. We've had a number that did not become variants of concern, but we're responsible for local circulation.

"We shouldn't panic about the fact that there is a new variant. We have masks that prevent all variants from infecting us. We have tools called vaccines, which are very likely to give us some level of protection against most of the variants."

India's Health ministry on Thursday said that two cases of Omicron have been detected in Karnataka.

"Both persons had travelled from South Africa. Their contacts have been identified and are under monitoring," said Dr Balram Bhargava, chief of Indian Council of Medical Research.

However, official sources said that one of them has already recovered, and the other in quarantine is asymptomatic and all right.

Prof Kang also said: "The third wave is not entirely dependent on the virus. It's also dependent on our behaviour and what we do to prevent the virus from spreading. And today, we have many more tools than we had at the beginning of the year. So I don't think that the time is right to predict anything."

According to S. Gopalakrishnan, Co-founder, Infosys and President - Board of Trustees, Infosys Science Foundation, the Covid pandemic has stressed the urgent need to promote scientific research in the country.

"Covid has created awareness about the importance of science and technology in people and clearly shown that the answers when something like this happens, a crisis happens lie in the use of science, engineering, technology, etc," he said.