Udupi: 'Bhattha Muhurtham' to be held on December 8

Udupi, Nov 29: "The ‘Bhattha Muhurtham’ (storage of paddy), the final of the four rituals leading to the next biennial ‘Paryaya’ in January 2022, will be performed by Krishnapur Math senior pontiff Vidyasagara Theertha Swamiji at Krishna temple premises on December 8," said Raghupati Bhat, working president of Sri Krishnapur Paryayotsava committee.

He was speaking at the press meet held on Monday November 29 at Sri Krishna Sabhabhavana. He said, "The final ritual Bhattha Muhurtham will be held at 8.22 am of Danurlagna Muhurtham. 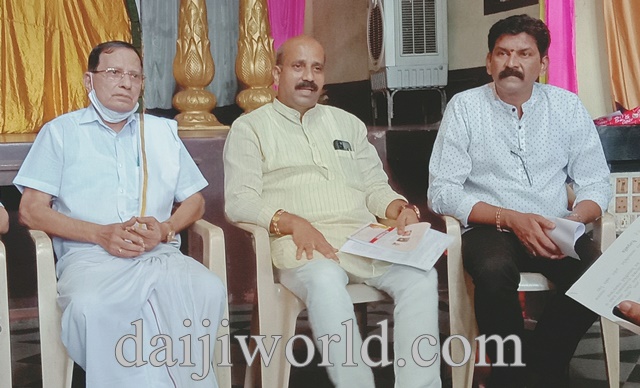 "As part of the paryaya preparation, 30 different committees, sub committees have been formed to monitor various activities during paryaya. Preparation for the upcoming Krishnapur Math paryaya is going on in full swing. Responsibility of committees are already shared. We have urged the government to support us. Kannada and Culture department will take the responsibility of the grand procession," he said.

He further saidf, "The City Municipality Council Udupi is spending Rs 7 crore to provide basic infrastructures to the city. Out of which, Rs 3 crore will be used to fill potholes and Rs 4 crore to repair roads around the city.

A proposal has been sent to the government to release Rs 30 crore as special grant. But due to the election code of conduct, the process may be delayed.

"An additional 75 civic workers have been appointed for maintaining cleanliness on contract basis.

Reacting to the question about lockdown, he said, "We are doing all the preparation as every time. I believe that no problems will appears during Paryaya. If so, the committee will follow the guidelines and norms of the government. Moreover, Udupi stands in top in vaccination in the state."

Title: Udupi: 'Bhattha Muhurtham' to be held on December 8