Mangaluru, Nov 27: Former minister and MLA U T Khader addressed a press meet here on Saturday November 27 in which he floored the state government on various issues and charged it of hobnobbing with the future of students, encouraging aggressors against the officials and igniting unsavoury incidents in coastal Karnataka.

Khader wondered the reasoning and rationale behind the fixing of income slab limit of eight lac rupees for the OBCs and then fixing the same income limit for the backward classes also. 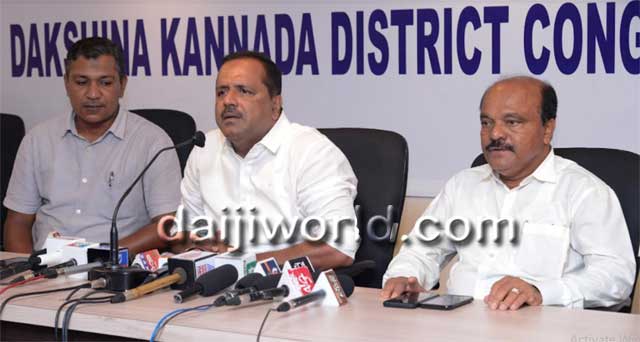 Referring to unwanted incidents happening in the coast, he blamed the state government for bringing pressure on the police as well as the officials and tying their hands and denying them the right to act freely. He said that because of political blackmailing, unpleasant incidents continue to happen here.

Public statements like catching the district deputy commissioner by his collar and breaking the legs of the policemen are the legacies of the BJP, he said. He noted that many unsavoury incidents happen because of instigating language and speeches. He wanted punitive action to be initiated boldly against those who speak in a way that disturbs the people and the society.

Khader accused the BJP activists of attacking the students, entering the campus of educational institutions by outsiders and being responsible for the situation to turn critical. He also said that arming the young people with tridents in the name of ordaining them into 'Trishul Deeksha' and spoiling the atmosphere in the society is a bad practice and wanted an in-depth investigation by the government. He pointed out that as per certain reports, these arms were used in some unpleasant incidents. He demanded action against those who ordained the people into 'Trishul Deeksha' if it is true that these arms were used in disturbing peace.

"The birth of political parties has been proving to be detrimental for the society. As long as I am given power by the people, I will work harmoniously by treating the people of all walks of life, castes and religions, equally. I will devote my time to them. I do not want to waste time commenting on what the communal forces say," he retorted.

Khader said that because of the faulty policies of the government, students pursuing medical degrees are in a dilemma. "The students, who have appeared for the examinations for pursuing higher education, are a confused lot. MBBS classes begin in August or September. Because of the wrong policies of the BJP which were framed without commitment, the students are at a loss. The students who appeared for the exams have not been counselled. Counselling has not begun for those who have done MBBS and want to pursue postgraduate courses," he commented. He said that if the exams are in held in April they have to face NEET again and wanted to know how the students can manage these things.

The MLA recalled that the common entrance test was introduced when Veerappa Moily was the minister. He wanted to know how the BJP government which could not properly handle what has been there all along, handle new education policy now. He termed the silence of the government on the issue as a betrayal of the students. He urged the government to take bold decisions and stick to the decision to reject NEET and go by only the CET. He questioned why the students of Karnataka have to suffer for the wrongs committed by the central government and wanted to know why the members of parliament are not showing any interest in these things. He pointed out that if the students fail to score good marks in the CET, their future is spoiled. He blamed the state government of being silent, having been threatened by the central government. He said that by doing so, the state has sacrificed the future of the students.