Chikkamagaluru, Nov 24: A woman in her eighties, who ekes out a living out of begging, has donated Rs 20,000 to a temple in Kadur in this district by pooling her savings. The people are more impressed by her selflessness in giving this money to the temple without imposing conditions like etching her name on the temple wall.

The woman who donated this money is Kempajji. She begs in front of Saibaba Mandir in Kote extension, Kadur. She donated the money to Sri Patalanjaneya Swamy temple which was dedicated to the world recently. 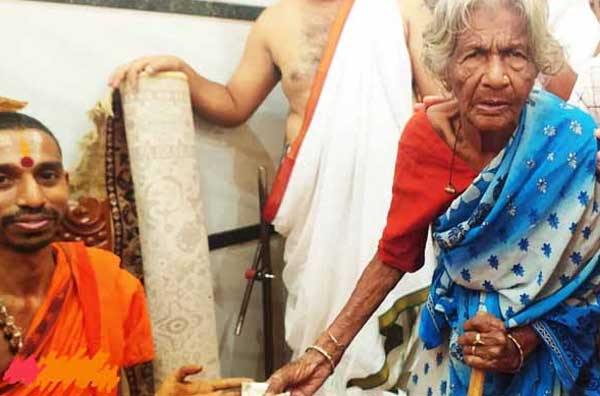 The woman was waiting outside the temple when the inaugural of the temple was held between November 15 and 17. When a temple staff tried to send her away, she handed over the money to him and requested him to submit her contribution or Rs 10,000 to the presiding deity with devotion on her behalf. She then approached the head of Sri Sanchari Ramanjaneya Swamy Peetam, Dattu Vasudeva Swamy and handed over Rs 10,000. At that time, it also transpired that she had already donated Rs 10,000 to the temple when it was under construction.

Kempajji, who is too weak to work for a living, has been staying in Saibaba Mandir and begging there. Owner of Vinayaka Cafe located next to the Saibaba Mandir, Bhaskar, provides her breakfast and lunch.

Mallikarjun, president of Sri Patalanjaneya Swamy Temple Committee, said that as a token of reverence towards the devotion of Kempajji, the Samithi will take over the responsibility of looking after Kempajji. Her story reminds one of Kanchogodu Aswathamma who donated one lac rupees to Lord Gurunarasimha temple, Saligrama in Udupi district during February this year as donation for the community feast programme there. She was a beggar who begs near Lord Anjaneya Swamy temple, Saligrama.