Karwar, Oct 27: A 19-year-old boy who was a college student, got an urge to travel all through the width and length of India. He began his journey on foot from a holy place. In a year he has covered 15 states on foot. He is not spending any money for his tour. People also are appreciative of his enthusiasm.

Speaking To the media persons, he revealed that his name is Rohan (19) from Maharashtra. His mission is to create awareness among the people of the importance of the Gurukul system that was in vogue in the country in the past. 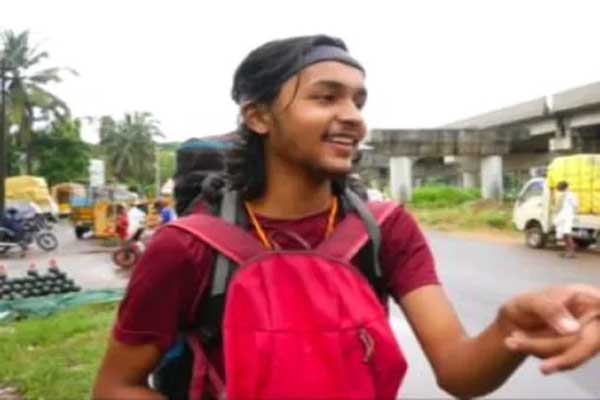 Rohan, a B Com degree student, realised that going out and mingling with people gives more knowledge than the college system. He knew that in the Gurukul system, roaming from place to place was a system of acquiring knowledge. He therefore planned to educate people about the fact that the current system of education does not imbibe many features of the Gurukul system. He also wanted to show that humanity exists even now, without spending any money for his travel.

Rohan has been consuming food offered by the people and staying a shelters where ever he is offered. He also takes a lift when vehicle riders offer to him. He has the dream of going to Siberia on foot one day.

Rohan believes that the road is his university and people are his teachers. He wants to popularise Gurukul system.