Bantwal, Oct 20: Two accused were arrested on Thursday October 21, regarding a case where a tipper driver tried to run over a police constable. The incident had taken place on Tuesday October 19 night.

The arrested are identified as Abdul Isaac and Moideen Azhar.

It may be recalled, constable Shekhar Chowgala and Radakrishna were on duty Farangipete outpost check-post. At around 2.30 am, when they tried to stop a tipper coming from Mangaluru, for checking, the driver attempted to run the vehicle over constable Chowgala. As another home guard pulled Shekhar to safety, a major tragedy was averted. 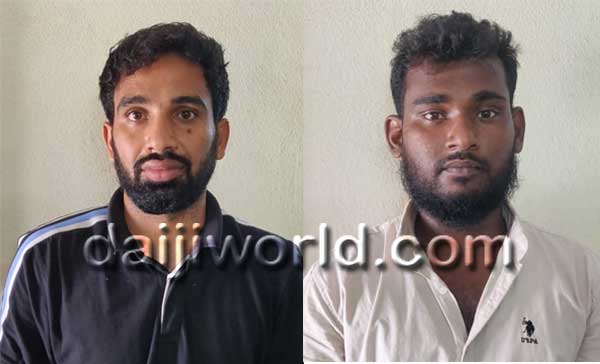 The tipper driver after ramming into the barricade, without stopping the vehicle, fled from the spot. Later, an Alto car which was following the tipper, also went without stopping. It is said that a person who was along with driver, abused the cops.

The two accused were arrested by Mangaluru city police. A case under IPC section 307 was also registered at Bantwal rural station against the accused.