Karkala, Oct 21: An edict carved out of stone has been found from Golikatte in Nandalike, Karkala taluk. Head of the department of archaeology, Prof T Murugeshi, said that Kartik, Gautham, and Shreyas, who are the archaeology students of Mulky Sundaram Shettyi Sollege, Shirva, found this edict.

The edict is written in Kannada script and runs eight lines. On one side of the stone which is shaped like an elongated lingam, the pictures of sun followed by half-moon are depicted. Below these pictures, the script is written in big letters. The stone is about 167 cm high. 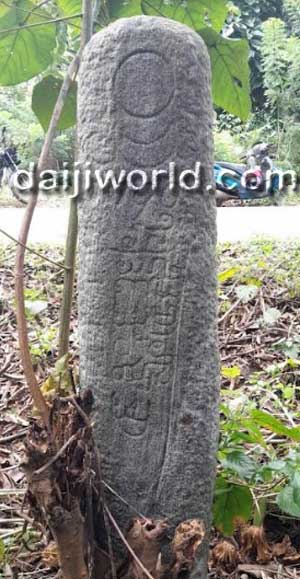 The stone is a record of the death of Beniya Ankayya Shetty, who passed away in 1905. Beniya Ankayya Shetty who died 116 years ago, can be imagined as a popular figure of his time. This unique stone was erected at the spot where he was cremated. This edict stands as a proof to show that the practice of getting edicts carved was in vogue in coastal Karnataka even at the beginning of the 20th century.