'No jobs in state': Tejashwi hits out at Nitish over J&K killings

Patna, Oct 18 (IANS): In wake of two more labourers from Bihar being killed in Jammu and Kashmir on Sunday, RJD leader Tejashwi Yadav blamed the Nitish Kumar government, saying it was unable to provide jobs in the state.

"Nitish Kumar, who has been ruling the state for the last 16 years, is unable to provide jobs in Bihar. A large number of poor Bihari labourers migrate to other states to earn their livelihood. It is really unfortunate that innocent Bihari labourers were brutally killed in Jammu and Kashmir," he said. 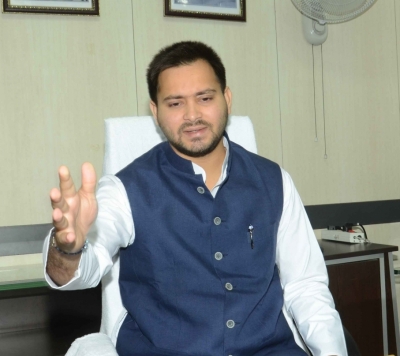 "The Narendra Modi government had claimed that the terrorism would be end after removal of Section 370. I want to ask PM Narendra Modi and BJP to give a statement on the gruesome attack of militants," Tejashwi Yadav said.

Meanwhile, Nitish Kumar has announced Rs 2 lakh each as ex-gratia to the labourers' family members, who live in Banka district, and expressed his grief.

"We have talked to Lt Governor of Jammu and Kashmir Manoj Sinha and expressed deep concern over the attack on Bihari labourers," he said in a statement.

Shah was also a native of Banka district and worked as a street food vendor in Srinagar. His brother had died due to Covid three months ago.

Title: 'No jobs in state': Tejashwi hits out at Nitish over J&K killings