Mumbai coastal road project to be ready by end-2023

Mumbai, Sep 23 (IANS): The first phase of the upcoming Mumbai coastal road - a showpiece project of the BrihanMumbai Municipal Corporation (BMC) - is 40 per cent complete and is expected to be operational by November 2023, a top official said here on Thursday.

BMC Commissioner I.S. Chahal said that more than one-third of the physical work on the 8-lane coastal road hugging the Arabian Sea from Marine Drive to Worli, around 10 km, which includes the 1 km long tunnel. 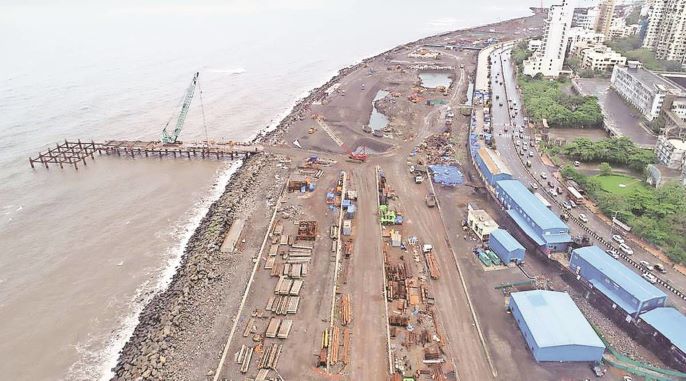 "The Rs 12,700 crore project, being executed by the BMC from its own funds, comprises the 27 km total length including 16 km of interchanges, and the 40-feet diameter tunnel running under the Malabar Hill," said Chahal.

Now, the work of remaining 900 metres of the tunnel - the first of its kind undersea tunnel of 40 feet diameter being executed in the country - remains to be completed, he added.

The coastal road would also include a 125-acre garden on reclaimed land abutting the freeway besides arrangements for underground parking for 1,852 cars.

The two-phased work, which was launched in around the beginning of the Covid-19 pandemic lockdown in early 2020, is proceeding round-the-clock in three shifts to catch the November 2023 deadline.

The project execution was scheduled to start in October 2018 with a completion date of end-2022, but got bogged down in litigations, a stop work by the court in July 2019 as the CRZ clearances were quashed.

The work resumed only after the Supreme Court stayed the Bombay High Court orders in December 2020 and is now proceeding at a quick pace in the first phase.

Running from Marine Drive in south Mumbai to Kandivali suburb in north-west along the Arabian Sea shores, the coastal road would be used by an estimated 125,000 vehicles daily cutting the travel time from the present 125 minutes to barely 40 minutes.

It will provide convenient interchanges at major locations including the airport, the sealinks, major railway stations, Haji Ali, Breach Candy, Worli, Bandra, etc, and will reduce the traffic burden on the two highways and the arterial roads criss-crossing the city.

Title: Mumbai coastal road project to be ready by end-2023