Mangaluru, Aug 2: In the light of the heightened perception of corona infection, the state government has made it mandatory for the passengers of Kerala and Maharashtra to compulsorily produce RT-PCR negative reports for crossing into Karnataka. From Sunday August 1 onward, checks at the state borders have become more stringent.

Inter-district bus services between Dakshina Kannada and Kasargod have come to a standstill. Buses from both the sides are operating till near the borders before returning. Police and revenue officials have been posted at the border for conducting the checks. Only those holding Covid negative certificates are allowed to cross the border. 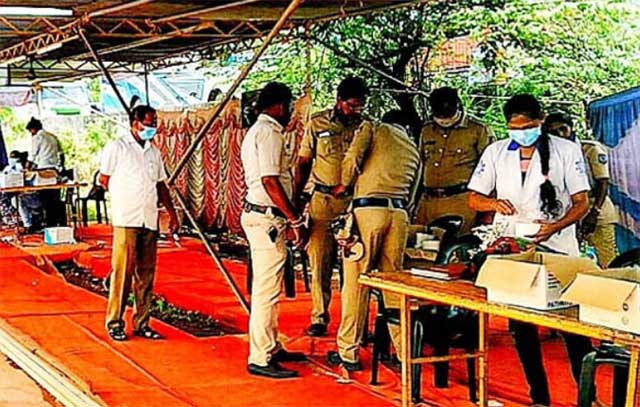 During the last 25 days, the health department has conducted RT-PCR tests of 15,000 people at the border. The health department team deployed at the central railway station here conducted these tests on 62 passengers while the team at Mangaluru Junction performed tests on 47 till Sunday afternoon, stated district health officer, Dr Kishore. Because of Covid restriction in Karnataka and weekend lockdown in Kerala, movement of vehicles on the national highway was very less.

Strict checking is undertaken at the Adoor border in Mandekolu in Sullia taluk where the border of Karnataka and Kerala is located. The decision of cancellation of bus services between Kerala and Karnataka has adversely affected people living at the border. Construction workers who rely on work on both sides of the border too are facing difficulty as their movement has been crippled. People coming in from Kerala have to produce negative Covid reports that is not older than 72 hours.

Close watch is also being kept on all the roads connecting Kerala within Vittal police station limits. Only those holding negative reports are allowed to move ahead. It is possible to reach Kerala through about 18 roads in the region, and the police have been vigilant. Check posts have been opened in Kanyana, Salelthur, Saradka, and Peruvai.

Increasing coronavirus infections and positivity rates have been posing a challenge to officials both in Dakshina Kannada and Kasargod districts. Udupi district family welfare officer, Dr Nagabhushan Udupa, said that out of 2,910 persons tested, coronavirus infection was found among 162. Of them, 15 were hospitalised. He said that as of now, the district has 1,200 active cases.