"The dabbawalas have been serving the people of Mumbai for over a century. They have made it to the Guinness World Records. Even Britain's Prince Charles came to Mumbai and appreciated their services," said Pawar. 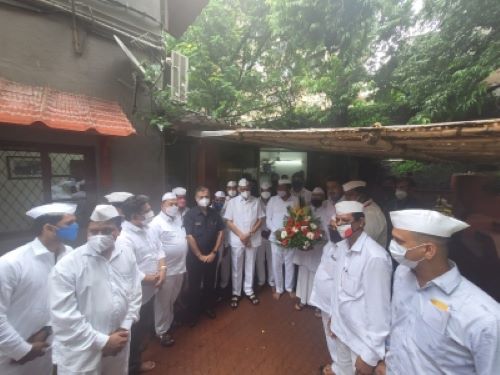 He said that the dabbawalas efficiently and humbly ferry tiffin-boxes to over 2,00,000 office-goers, workers, students and others, and the people have a lot to learn from them.

Later, Pawar distributed bicycles to four dabbawalas of the first lot of 200, and the rest will be given out over the next couple of days.

Nutan Mumbai Tiffin Box Suppliers Charity Trust (NMTBSCT) President Ulhas Muke offered the traditional 'dabbawala cap' to Pawar who readily donned it, draped the NCP leader with a shawl, and presented h a memento of their iconic trademark, a gleaming 'dabba' in a glass case.

He said that the Maha Vikas Aghadi government of Shiv Sena-NCP-Congress has been very helpful to the dabbawalas and have promised to set up a Dabbawalas Housing Complex with around 3,500-plus homes in Thane.

"We have identified a plot of land for this and the government will construct the flats and allot to the dabbawalas, including those who have retired," said Muke.

The first lot of 200 bicycles -- the chief commuting tool for the dabbawalas for the past 130 years -- was financed through crowd-funding, said NMTBSCT Spokesperson Ritesh S. Andre.

"Each heavy-duty bicycle costs Rs 6,500. In around a month, HSBC India will donate around 1,300 bicycles under their CSR activity to cover almost all the dabbawalas now and in our proposed future endeavours," Andre told IANS.

Taking a near-fatal hit during the two protracted periods of Covid-19 pandemic lockdown, the dabbawalas are now slowly limping back to normalcy, with nearly 25 per cent of the 2,000-strong tribe resuming duties, said another office-bearer Ramdas Karvande.

"However, from August 15, we have decided to diversify by setting up a community kitchen, subscription-based, from where we shall supply tiffins to the customers all over Mumbai. Initially, we target 1,000 meals/day, which will be later scaled up as per demand," Andre added.

Renowned globally for their top efficiency, the dabbawalas have been the subject matter for studies and research in leading universities, and visited by The Netherlands' Queen Maxima, the newly-anointed astronaut Richard Branson and other prominent dignitaries, besides being invited to the royal wedding of Prince Charles and Camilla Parker Bowles in 2005.

The dabbawalas reciprocated by sending a set of Maharashtrian-style silver gifts to herald the birth of Archie Mountbatten-Windsor, the first child of Prince Harry and Meghan Markle, in May 2019.