Mangaluru, Mar 26: The first ever plant in the state that proposes to process the saline water of the sea and provide fresh water to industries, which is coming up at Tannirbavi here is nearing completion. Within a few days, the plant will start to pump out desalinated water.

The plan is being built by Mangalore Refinery and Petrochemicals Ltd (MRPL). 70 percent of the plant's works are completed. The processed water is proposed to be supplied to MRPL through pipes. The work on the plant is being executed by a Chennai-based company which got the tender for Rs 595 crore. The company is backed by the experience of having built such plants in Chennai and other places. The plant is coming up in 13 acres of land and 30 percent of work is pending. MRPL will get its entire requirement of water from this unit. 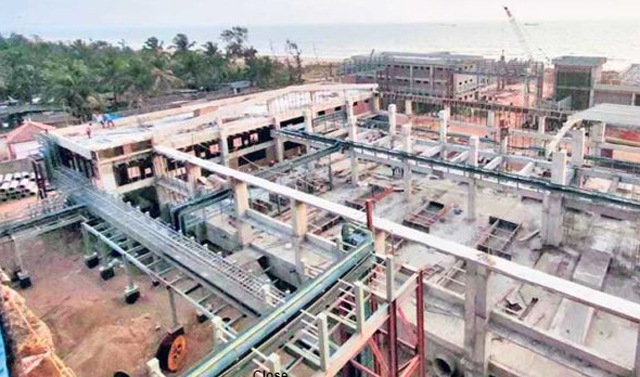 For running the refinery, MRPL needs six MGD water every day. Water is also needed to generate power through the captive power plant. Crude oil is processed at 300 to 400 degree Celsius and a huge quantum of water is needed to cool it down. So far, MRPL has been getting water from Netravati river and Kavoor underground processing unit at Kavoor here.

The district encounters water problem normally after February. When drinking water shortage is experienced by the city, the corporation cuts down the water being supplied to industries from Netravati river. In the past, the idea of processing seawater for industries had been mooted when the city faced shortage of drinking water but the proposal is stuck in files. The corporators had undertaken a visit to Chennai to see for themselves the working of the plant, but other than that, this matter did not move ahead.

When water shortage is acute, industries like MRPL face the compulsion to shut down their units. The desalination plant has been built as an alternative for dependency on river water. Land belonging to New Mangalore Port Trust has been used for building the plant. Similar units are functioning in various places and the Gulf countries. MRPL,which is currently using treated sewage water from Kavoor, is also interested in using treated water from three other sewage treatment plants in the city.

Managing director of MRPL M Venkatesh, says that this is an important project as far as the use of water is concerned, and the unit that has been 70 per cent complete, is racing towards completion.