Kochi, Oct 23: A special prosecutor may be appointed to deal with the case registered against Bishop Franco Mulakkal, it is gathered.

‘Save our sisters’ (SOS) action council met Kerala chief minister Pinarayi Vijayan demanding the special prosecutor and it is said that they received a positive response.

They also requested the chief minister for a special court. They discussed the issue with MV Jayarajan, private secretary of the CM. 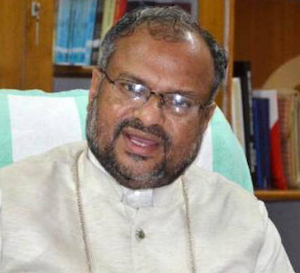 SOS approached the chief minister pointing out that delay in hearing will help the accused influence the witnesses and raise threat against the victim. They also explained the incident in which the priest Fr Kuriakose who gave statement against Franco was found dead in Jalandhar. He was the parish priest in Jalandhar diocese earlier and a rector of nuns. He was demoted to the position of a resident priest after giving statement against Franco.

The complainants requested to bring dead body of Fr Kuriakose to Kerala under the surveillance of police and to conduct autopsy.

SOS met speaker P Sreeramakrishnan and requested that the Assembly Ethics Committee must file a case against PC George. They will submit a plea to the committee chairman A Pradeep Kumar MLA based on the instruction of the Speaker. The complaint was given for insulting the aggrieved nun and her family in public.