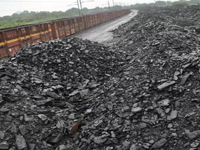 New Delhi, Aug 8 (IANS): The CBI Friday registered the 27th case against a Nagpur-based private company and its then director in its ongoing probe into alleged irregularities in coal block allocation.
The Central Bureau of Investigation (CBI) filed the fresh first information report (FIR) against Gondwana Ispat Ltd. (GIL), and its then director Ashok Daga on charges of criminal conspiracy, cheating and criminal misconduct.
The case is related to the allocation of the Majra coal block in 2003.
A CBI official said GIL misrepresented on aspect of preparedness to get the coal block and later the company disposed of its equity without developing the coal mine and the end use for which it was allocated.
According to the official, it has been alleged that Daga had requested the coal ministry in April 2000 for allocation of the coal block, whereas GIL was incorporated only in October 2001.
The coal ministry allocated the Majra coal block on the assurance of the company that it shall install the plant and develop the coal mine.
"It was also assured that the entire coal mined from the said coal block shall be consumed in the proposed sponge iron plant at Warora in Chandrapur district of Maharashtra," the official said.
But, the official further said, Daga allegedly disposed of the equity of the company without any intimation or permission from the coal ministry and entered into an agreement with purchasers without installing the plant.
"It is also alleged that Daga received a payment of Rs.1.55 crore from the buyers as one-time payment," the official said.
Including the fresh FIR, the CBI has till now registered 27 FIRs and five preliminary inquiries. It has filed closure reports in four FIRs and two chargesheets.