A mix of tradition, conservation makes tree weddings in UP villages unique

Sitapur (Uttar Pradesh), Dec 5 (IANS/ 101Reporters): If you want to see the interdependent and nurturing relationship between trees and humans, these villages in Uttar Pradesh are the places to go.

In districts of Sitapur, Saharanpur and Kasganj, trees are considered a part of the family. They are raised as sons and daughters and are celebrated through janeu (a rite of passage in some sections of Hindu community) and their marriages are organised with full pomp and show. 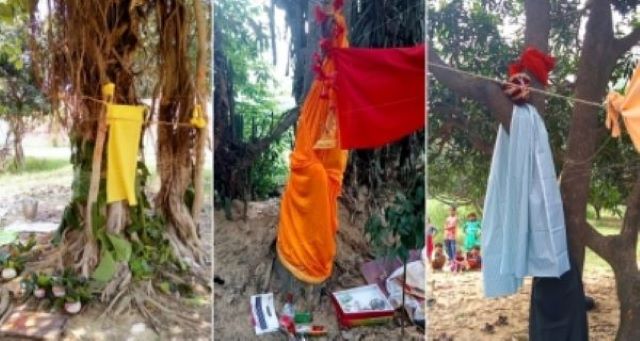 The villagers believe that if trees are married, they will thrive and their 'family' will grow rapidly, besides producing more fruits. Such rituals indirectly promote environmental conservation.

Explaining the idea behind these ceremonies, Anirudh Awasthi, who attended the janeu of a banyan tree in Bramhavali village of Sitapur district five months ago, tells 101Reporters, "Trees provide us with oxygen. We cannot live without it. They are a part of our family. They are everything to us, which is why we celebrate them."

Once the tree's janeu ceremony is over, it is worshipped in villages. "The rituals performed are the same as the ones practised for humans. During the ceremony, the tree is clothed and a sacred thread is tied around it. Everyone participates wholeheartedly," says Awasthi (35).

Children are fed barua (a sweet prepared with buttermilk and rice). Traditionally, girls are offered food first, after which the entire village eats together.

Usually, banyan and amla trees are selected for the janeu ceremony. "Banyan is the national tree of our country. It spreads outwards indefinitely, has medicinal properties and survives for generations. The tree is very important to us and its protection is our responsibility. We even hold programmes to underscore its importance. Though it does not bear fruits, banyan is an environmentally-vital species. This is why the villagers came together for the janeu ceremony," says Rangnath Pandey (60).

Anil Kumar Mishra of Ashokpur village in Kasganj district officiated the marriage between a mango groom and jamun bride in neighbouring Binpur village last year. "I officiated another wedding in my village about 30 years ago. The tree is considered a child. Once married, the family does not consume its fruits. Instead, they donate the tree so that others in the community can enjoy its fruits."

Everything that you would expect in a human wedding happens at the tree wedding. A procession is taken out, and the entire event lasts for about four to five hours. Typically, a fruit-bearing tree like mango is selected for the wedding so that the person to whom it is donated gets the fruits.

The ceremony also forms an emotional bond, as no human will harm a tree that was nurtured like a child.

Kirti Bhushan Trivedi (45) of Bramhavali village says the tradition has been a part of village lifestyle for generations. "My grandmother also held a tree wedding. If seen from a social point, the practice encourages the concept of brotherhood. You donate a tree you planted to someone else. In addition, when children see us serving trees, they also grow up to do the same."

The thing about such events is that it brings people together, irrespective of religion, caste and class. "The only religion is the religion of planting trees," says Mishra, adding that tree weddings can happen anywhere and anyone can participate; the only thing that everyone must believe in is the need to conserve environment.

Trivedi says he spent Rs 2,000, excluding the cost incurred on a feast, for the janeu ceremony of a banyan tree. "People also donate money to organise the event. Since it is an expensive affair, such events are not held widely in villages. But whenever it happens, they step forward and participate," he says.

During the event, new clothes, mor (groom's headgear) and ornaments are placed around the 'groom'. For the 'bride', lipstick, bangles, bindi, saree and jewellery are kept beneath the tree. The baraat goes through the village, after which they sit and eat together.

A mood of celebration prevails as the social and cultural programme progresses, thriving on the love for nature.

Title: A mix of tradition, conservation makes tree weddings in UP villages unique