Beltangady, Nov 27: Dharmasthala police conducted a search operation at Bendrala as it has come to light that cooker bomber Sharik had called a prohibited satellite phone number a day before the act.

Central officers received information that at 5 pm on November 18 that the satellite phone call was made to Sharik from Bendrala forest area under Thotattadi village. Accordingly, the internal security department and local police were asked to comb the area. Dharmasthala police and Mangaluru internal security team led by inspector Chidananda had visited Bendrala forest area on Friday itself. On Saturday, the teams visited Bendrala once again on Saturday and combed about 5-km area in the forest. They zeroed in on the spot from where the call was made but did not find any evidence there.

Locals Mohan Gowda, Umesh B, Sathish Balli and Kartik helped the police team in finding the way to reach the spot in the forest. Dharmasthala PSI Anil Kumar and Personnel including Mohammed Aslam, Prashant and Rajesh were in the team.

Meanwhile, Dakshina Kannada district SP Rishikesh Bhagwan Sonawane has stated that there is no confirmation regarding the sattelite calls made from the accused from Bendarala's Baare or around Kakkinje before the cooker blast. The locals often burst crackers this side to chase elephants away and people might have misconstrued this for bomb explosion, he added. The investigations so far haven't yielded any clues in this direction, he said.

Security has been beefed up around the hospital since there is threat to his life. It is feared that the terror sleepers are active in the area and that Sharik's handlers might be trying to bump him off fearing his confesssion during interrogation.

It is said that a police inspector, two sub inspectors  and two additional staff are deployed around the intensive care unit where Sharik is being treated for burn injuries. 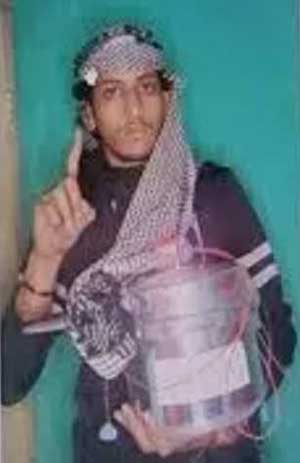 Sources in the hospital have said that Sharik is recovering and the police may soon be able to interrogate him.