Udupi, Nov 24: The counseling Cell of SMVITM, in association with the Indian Medical Association, Udupi- Karavali organized a programme on “Nasha Mukth Abhiyan” on November 23 in the seminar Hall of Admin block at 11 am. 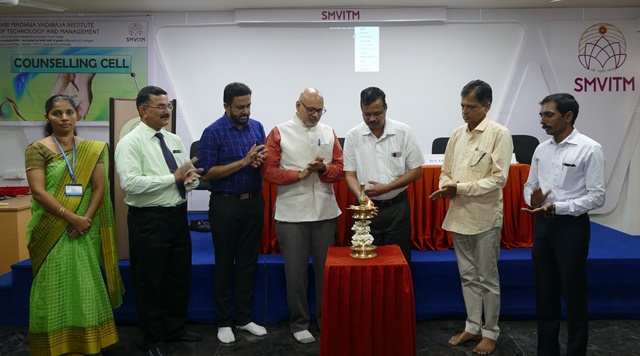 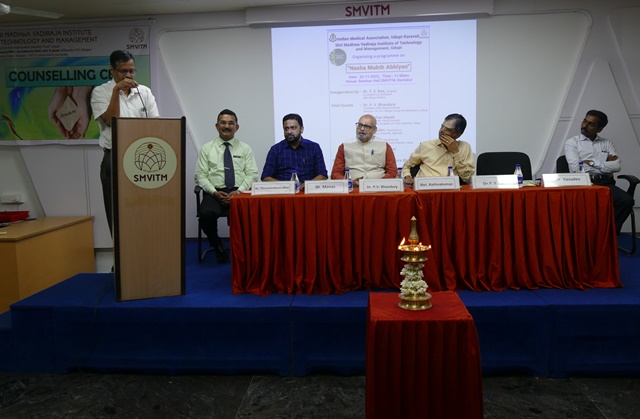 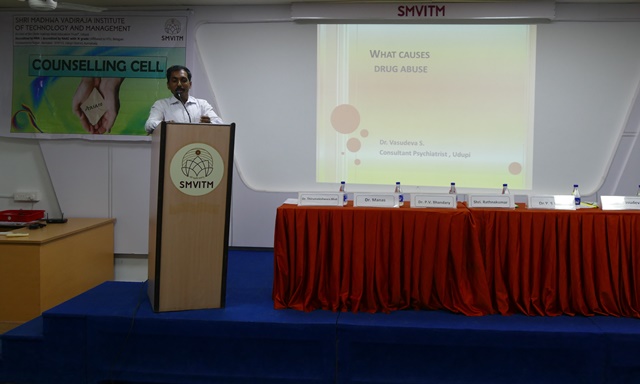 Dr Y S Rao, in his address, gave information about the effects of substance abuse on individual health. He also said that in the adult age the students are grown up enough to identify which is good and which is bad for them. He spoke about the physical, psychological and societal effects of drug abuse. Rathna Kumar, secretary, SSVMET, Udupi, in his address, said that the intake of alcohol affects the students' career to the large extent. He also said that the preventive measures should be taken to save the life of the individual. He congratulated Dr P V Bhandary and team for taking up such initiatives to prevent drug abuse and for contributing to the welfare of the society. Dr Thirumaleshwara Bhat, principal, SMVITM, Udupi in his presidential address, said that the educational institutions should support the doctors' association to prevent the drug abuse. He also said that the policy will be made at the college level in association with doctors to prevent drug abuse. Dr Vasudev took a session on the “Causes of substance abuse.” He started with some of the examples like how the students have affected their life due to substance abuse. He also stated that the identification in the initial stage will help in bringing it to control. He gave statistics about the research done by AIMS which reveals that more than 3 crore people in India are addicted to alcohol, 25 lacs to drugs, 28 lacs to OPI and many of them are addicted to sniffing the whitener and petrol. He also said that majority of the people in India are addicted to country liquor and spirits. In India, 90% of the people start taking alcohol before 18 years of age.He said that the influence of substance abuse in the family makes the individual three times more vulnerable to start substance abuse. He also said that initially the students may start out of curiosity which may end up with addiction.

Dr P V Bhandary took a session on “Types of drugs and its effects.” He started with the fact that usage of high energy drink by the students will act as a stimulant and affects the health on long term usage. He said that the drugs lead to the development of cancerous cells. He also said that there is no medicinal value in the drugs. He highlighted that the substance abuse will lead to liver damage, brain damage, cancer and heart attacks.

Dr Manas took a session on consequences of substance abuse. He explained the reasons for stress and anxiety and gave information about its reduction in our day to day life. The program was compered by Akshatha , Department of Electronics and Communication Engineering. Shashikala, Department of Electronics and Communication, welcomed the gathering and coordinated the event.The vote of Thanks was proposed by Dr Deepika, Department of Civil Engineering. Dr Ganesh Aithal, vice principal, HoDs, faculty, staff and students benefited from the program.