Confirming, Raut said that Gandhi had taken time off his busy schedules in the Bharat Jodo Yatra (BJY) to call him up late on Sunday and speak very warmly with him.

"We were worried for you," Gandhi told Raut, who was released on bail last week after spending around 110 days in jail. 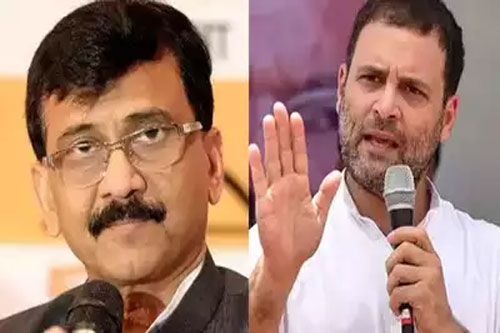 "In spite of strong differences of opinion on some issues, inquiring on your political colleague is a sign of humanity… During his busy schedules of BJY, Rahulji Gandhi called yesterday to inquire about my health," a visibly touched Raut said on Monday.

The Sena (UBT) leader observed that "in times of political bitterness, such gestures are becoming rare", referring to the current scenario that has caused concerns among all sections of the polity.

"I appreciate his empathy of feeling the pain of a political colleague who has spent 110 days in jail," acknowledged Raut, and pointed out - barring the leaders Sena (UBT) or allies like Congress and Nationalist Congress Party - "how many of the others even bothered to ask think of me or ask about my family when I was in jail on a false case".

He said that since "Rahulji is focussing on love and compassion in his BJY… Its' getting a massive response", with thousands of people, including elderly men and women, youth and others flocking to meet him en route the march every day.

Soon after his release on bail, Raut had expressed inability to join the BJY owing to health conditions, though the Sena (UBT)'s senior leaders like Aditya Thackeray and Ambadas Danve and others joined Gandhi in Nanded, walking with him on November 11.