Chikkaballapur, Nov 15 (IANS): Three inter-state robbers from Uttar Pradesh and Andhra Pradesh, who looted a policeman's house and shot his son in Karnataka's Chikkaballapur district, were arrested on Tuesday.

The arrested were identified as Arif (35) from Bahiram city in Bijnor district of Uttar Pradesh, Jumshed Khan (27), a resident of Chintaman Khate village in Milak taluk of Rampur district and Pathan Mohammad Harris Khan (30) from Kadiri town in Satya Sai district of Andhra Pradesh. 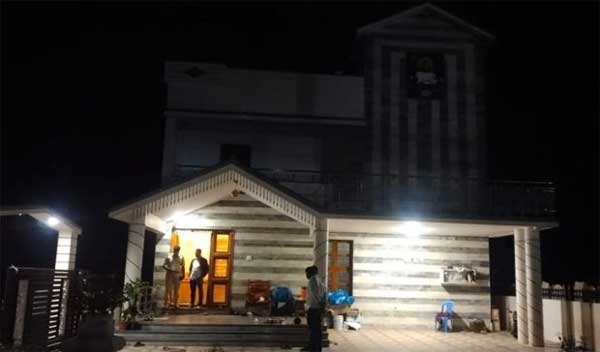 The house looted by robbers

The police have seized three guns, 46 bullets, Rs 3.41 lakh cash, gold chain, 21 silver articles and the car used for the offence from the accused. Hunt is on for other accused in the case.

On November 9, a gang of five robbers barged into the house of Narayana Swamy, an assistant police sub-inspector (ASI), shot his son and looted gold jewellery and cash.

The robbers fired three bullets at ASI Narayanaswamy's son Sharath. He was admitted to the district hospital and his condition is still serious.

The robbers after barging into the house threatened Narayanaswamy, his wife and daughter-in-law with the pistol. The robbers had pushed Narayanaswamy out of the house and warned him that if he told about the incident to anyone, his family members would be killed.

Sharath, who was also at home, came to the rescue of his family members post which robbers opened fire on him. Paresandra police had taken up the investigation. Further investigation is on.