In this endeavour, Nehru found a doyen, Mumbai's legendary scientist, Dr Homi Bhabha, who, after a trip to Europe, wrote to the Prime Minister in April 1948 on the need for taking the first baby steps towards a peaceable nuclear programme for self-reliance and progress, in the form of the ‘Atomic Energy Commission' (AEC). 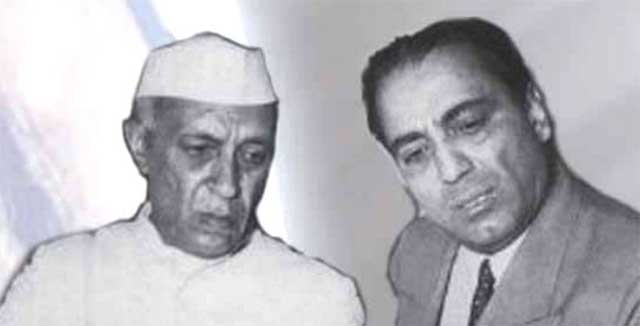 Both Nehru and Bhabha were intellectual giants, with a scientific temperament, who understood and held each other in high esteem, guided or advised each other, at times admitted or ignored slights, and worked towards the common goals for India's future.

The young Bhabha had already caught the country's attention when in 1945 he was instrumental in setting up the Tata Institute of Fundamental Research (TIFR), with a generous donation from the Tata Group, on the Indian Institute of Science (IISc) campus in Colaba.

To ensure secrecy, Bhabha forcefully argued to Nehru how the AEC must be a small body of three eminent scientists, and should be directly under the PM's jurisdiction instead of any other department of the government -- which it remains till date.

Working on a budget of around Rs 1.10 crore for four years -- to create an adequate ‘nuclear pile' comprising heavy water and Uranium bought from some other nuclear powers, and for atomic research and development -- Nehru and Bhabha, who were also good friends, although they were separated by 20 years, laid the foundations for the country's peaceful nuclear programme.

According to a publication of the Department of Atomic Energy (DAE), 'Nuclear India' (2008), Bhabha fondly addressed Nehru as ‘My Dear Bhai' in all his communications and Nehru reciprocated with an informal ‘My Dear Homi', and both signed off with 'Yours Ever', 'Yours Affectionately' and 'Ever Yours', indicating their close bonds.

Nearly seven decades ago, Nehru got several suggestions from a concerned Bhabha on the need to improve the quality of students churned out by the handful of Indian universities, for close cooperation between institutions of higher learning and research bodies (1950), and enhanced cooperation with national laboratories to produce and nurture a pool of the best of scientific talent in India (1952).

In July 1954, Bhabha unveiled his vision of atomic power (electricity) generation for India at the Atomic Energy Establishment Trombay (AEET), which was later renamed in his memory as ‘Bhabha Atomic Research Centre' (BARC), sourcing uranium of the right quality, setting up the nuclear power reactors and breeder reactors, and all related aspects.

A year later (July 1955), Bhabha informed the PM on the successful commissioning of the Thorium Plant, and in August, he reported to Nehru on the outcome of the first international conference on the Peaceful Uses of Atomic Energy in Geneva.

With 1,428 delegates from 73 countries, Bhabha was the President and he proudly recounted to the PM how India made a good showing plus how some of its achievements attracted world media attention.

In January 1956, Bhabha advised the PM to set up a Scientific Advisory Committee comprising top experts from various fields, and in June he started work on the Trombay atomic energy project on 1,200 acres of land with a budget of around Rs 2-3 crore, which was already earmarked for the infrastructure, barring nuclear reactors.

He informed the PM on how a part of the proposal to appoint architects for the mega-project was jettisoned by the Union Finance Ministry without the Finance Secretary even seeing it, but Nehru intervened to overrule the Ministry of Finance and approved it the very next day!

At one point, an apparently peeved Bhabha shot off a letter to Nehru about certain government rules that hampered the team of dedicated scientists working practically round-the-clock to build the Trombay nuclear reactor site and demanded proper food from a local restaurant, plus two cars at their disposal. The PM replied the same day: "I agree."

Then, on August 4, 1956, came the moment of glory which caught global attention -- India's first atomic reactor Apsara went critical -- also becoming Asia's first, and the country catapulted into ‘an exclusive nuclear club' on the planet.

Nehru immediately conveyed his congratulations to the entire team of scientists for the historic achievement. Later, on January 20, 1957, he visited the Apsara reactor here, where he shared his vision on the importance of nuclear revolution with the countrymen.

Once Nehru confided in Bhabha how it was ‘frustrating' to seek loans from foreign countries and how the country had to balance the requirements of nuclear power vis-a-vis free and compulsory primary school education for all children up to 14 years of age in the country, as mandated by the Constitution.

Not feeling dejected by Nehru's letter, the very next day, July 31, 1958, an excited Bhabha informed the PM that he had been conferred an Honorary Fellowship of TIFR, and the latter's reply was heart-warming: "I have little choice in the matter. If you so wish, I shall accept it...," said Nehru.

Just as Nehru opened his heart to Bhabha, the latter used to share his various professional and personal achievements in India and abroad, unfailingly earning genuine admiration and accolades from the PM.

Following the success of the first nuclear power plant in Trombay, the PM got requests from other states like the then Rajasthan Chief Minister Mohanlal Sukhadia (June 1960) or the Karnataka ex-MP H.C. Dasappa (June 1962), which were heeded and the two states got their nuclear power plants at Rawatbhata and Kaiga, respectively.

On May 27, 1964, Nehru, 74, passed away in New Delhi. And 20 months later, on January 24, 1966, Bhabha, 56, perished when the Air India flight he was in crashed in the Mont Blanc mountains in Europe. But the duo had set India firmly on the 'nuclear path', the fruits of which are still being enjoyed today.