Kundapur, Oct 1: “We agree that prayers should be offered at mosques. But oppose unnecessary harassment to public. Though Supreme Court has clearly ordered, the concerned departments are not implementing the order. What is the state government doing? It is not able to prohibit the use of mikes in mosques,” said national president of Sri Rama Sene Pramod Muthalik.

He was speaking at a press conference organized at Hotel Sharon in the city. He further said, “If government does not take action, we will remove the mikes in mosques in coming days. 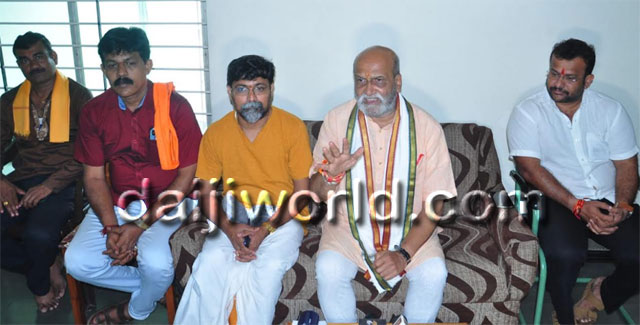 “We welcome the order of the government to provide employment to wife of slain BJP leader Praveen Nettaru in CMs office. But she should have been provided permanent job at Puttur. Contract job can be cancelled any time. There is no guarantee. So she should be given permanent job.

“Union government has taken right action against PFI. This is a bold step in safe guarding the country. This is a good development. Sri Rama Sene is fighting for this ban right from the beginning. Now it has got its due.

“PFI is a vast network and deeper investigation is needed. Their roots are very strong. Anti-national organizations should be uprooted. Sri Rama Sene has much information about PFI and it will submit the same to the home minister.

“Some Muslim are objecting the development of road near Kundapur bus stand. That road should be developed immediately. If anyone objects case of obstructing government duty should be booked.

“Compound wall of a Darga is inside the campus of government educational institute in the city. This is not right. We will get the documents from concerned and think of holding protest in future.