Los Angeles, Sep 25 (IANS): Former US President Bill Clinton believes that "democracy is fragile right now", and, says 'Variety', he spoke candidly on Saturday at A+E Networks and the History Channel's History Talks about the issues "tearing us apart".

"What's more important? Our common humanity or differences?" Clinton mused. "And what works better to build the kind of future we all want? Does cooperation work better, or is everything a zero-sum game?" 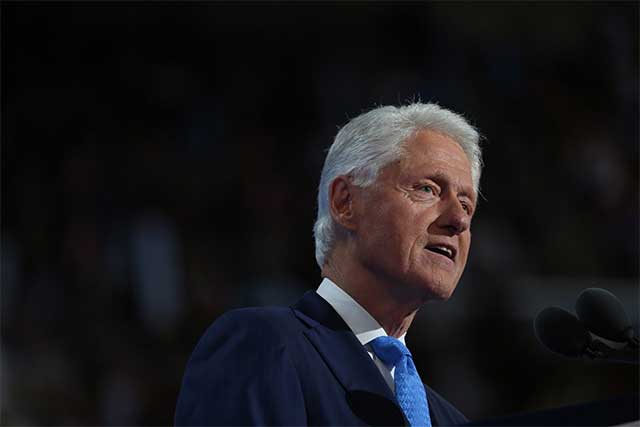 The former president was joined by Tom Hanks, chef-philanthropist Jose Andres and moderator Chelsea Clinton in an hour-long conversation. They spoke at length about their humanitarian efforts, as well as their hopes and concerns about the outlook of the country, spoke 'Variety'.

Chelsea made one thing clear -- young people alone should not be responsible for the future of the world. "I loathe the framing that young people are going to save us," she said. "With all due respect, what the f**k are adults doing?"

As the audience cheered, an aghast Hanks mouthed: "She said 'f**k'."

Hanks, speaking with the reverence and authority of a history professor, said that educating people about true historical events can help to get the public to care about -- and advocate for -- important causes in their own community.

But being a storyteller is a responsibility that comes with great power, he said. In short, according to 'Variety', he doesn't support artistes who feel inclined to bend, bow or break from reality.

"I do non-fiction entertainment," noted Hanks, who has played real-life figures such as Captain Phillips, Mr Rogers, Walt Disney and Captain Sully Sullenberger on screen. "[It's] the best of entertainment because that comes with a degree of education."

But while adapting stories for movies, TV, podcasts or documentaries, Hanks said there's an obligation to ensure the truth doesn't end up getting "crowded out" at the expense of telling a good tale.

"When we come across inconvenient facts that we don't want to talk about because it may take away from the purity of a protagonist ... I say, 'Oh, what you want to do is alternative history. You want to have an alternative fact'."

Andres got the crowd cheering as he delivered an impassioned, rousing plea for the government to treat food as a national security issue. His charity, World Central Kitchen, a food relief operation, has donated hundreds of millions of meals to people and communities in need.